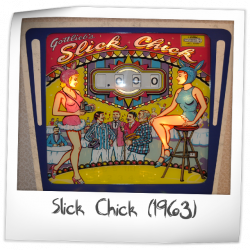 One of my all time favorite wedgeheads, designed by the venerable Wayne Neyens. An INSANE layout, that is unlike anything else, and the ball action is superb. This game is the essence of pinball, and having to spell "SLICK" and "CHICK" sequentially is a major achievement in the development of scoring rules in the history of pinball. An absolute blast, and brutal (but all wedgeheads are). If you see it, play it.

Possibly the first truly good pinball game. Honestly fun to play and more pop bumper than any other machine ever made (i believe). Not a great game as most of what pinball needed to become great was at least a generation away. But for it's era this is a standout machine. Probably can be had at a fairly reasonable price.

I have to say Slick Chick is one of my all time favorite Ems. This was the second game I ever played and I looked forward to playing this game everyday after dinner at the rear of my local grocery store along with several best friends. Even today I still enjoy this machine as much as any I've played.

classicszone has this game on the wishlist.

As much as I like looking at this one, particularly at night in a darkened room , I soon tire of it simply as it's a drain monster. I've lost count of how many times I've lost the ball at a crucial moment, even when cheating with double flipper rubbers, it still irritates. I've seen sc's with an extra post mounted just underneath the flippers and can see why it was done though I wouldn't do that myself.

I know this game is a classic, but I've never been in love with it. There are plenty of challenges, starting with a skill shot of sorts at the top that will turn off a row of bumpers. Hitting the fan targets or in-sequence bumpers takes good shot making (or luck).

The gobble hole turns off a lot of people, but there are no side drains and the flippers are far apart. The hole's 100 point value is far more rewarding than draining down the center. It's even more rewarding if you're able to light it for a special.

The lights on the game are very colorful, with orange, red and purple lenses. When you get them all lit, it's a pretty sight. The pseudo-Playboy theme with the zany bunnies is comical, but the game doesn't lure me back to play it again and again.

Good playfield layout and great artwork..Alot of things to shoot for as well as an amazing feeling to watch the pop bumpers light up....A blast to play and look at.

Deerlakes6 edited previous rating on May 14, 2017.
Deerlakes6 has owned this game in the past.

This is a great EM, although it has to be noted that a lot of the upper playfield scoring comes down to luck. 1-2-3-4 in order? Come on now. With no shot at the center standup target you're at the mercy of the bumpers. Even without outlanes it's pretty brutal but easy enough to nudge and keep the ball in play. A lit gobble hole for 100 points seems enormous on this game. It's very tempting to end your ball with a bang rather than fizzle out with a center drain.

The Slick Chick bumper effect is awesome. This game has maybe the best EM light show ever. In fact it's overall a great looker. I normally hate symmetrical layouts, but just look at how cool this thing is!

Great game. Difficult if not impossible to hit the rollover lanes in order. Easy to nudge and save the ball. Great theme - the first Playboy nightclubs.

Played SC hundreds of times in my youth & loved it. It can be a frustrating game, and is pretty difficult to score well. Theme is enjoyable.
8.930/10
5 years ago
???

A rare occasion where the playfield design is better than the play. A great use of pop bumpers and surprisingly more fun than it looks. And getting back on top is always possible in spite of all the intrusions.
7.926/10
5 years ago
ROB

Slick Chick is the epitome of simple, but never ever easy.

The Pros:
How can so much GAME be packed into an eeety-beety-fleeper game with no outlanes? Your nudging skills better be on point, because you're gonna need them all over this table. Heck, you'll need them even after the ball passes between the eeety-beety-fleepers! Try to get all the rollovers in the 1-4 sequence, just try. Try to hit all the bumpers, just try, now do it 4 more times to light the special, just try... I don't like gobble holes much, but when that thing is lit... SOOOO tempting! Make sure to plunge skillfully as the SLICK or CHICK can be unlit from the top lanes.

The Cons:
Covetous collectors have made the acquisition of this game a difficult task indeed. Expect to pay boucoup dinero for this table or cross your fingers and toes that you'll gits lucky with a garage sale/ barn find. Lucking into the upper standup is, well... luck.

The Takeaway:
Find one if you can, or find a collector who has one and see what the fuss is all about. This game will keep you coming back again and again and again. If this game is bouncy and fresh, you will never get bored with this deck. And that's saying a bit for a game made in 1963. Wayne Neyens knocked this design out of the park!

Delighted to review a machine that I had recently acquired. For me, I love a game with plenty of pop bumpers and requires skillful nudging. As a still avid pinball fan in his early 60's, revisiting the games that I played as a teenager is a wonderful reminiscence.

The Pennyarcade Website has a well-written commentary about Slick Chick:
"The late/great pinball historian and author, Dick Bueschel called Slick Chick "One of the finest, if not the absolute finest flipper skill game ever made". In the early 1960's, Hugh Hefner's Playboy magazine was very successful and Hefner was expanding the Playboy empire by opening Playboy key clubs nationwide. Dave Gottlieb assigned Wayne Neyens the task of designing a game in the Playboy theme without actually using the Playboy name. Neyens designed a extremely clever game using criss-crossed letters and requiring skilled shooting to get a good score. The working name for the project was 'Party Girls' with a R in the intersection. However, it was felt that the name could have other meanings and was too risque so a new name needed to be created. Wayne Neyens has said that while driving to a friend's home for dinner one night, he observed a sign for a newly opened restaurant, 'Slick Chick'. Wayne had found the perfect name including a "I" at the intersection. The beautiful artwork was provided by Roy Parker. During the 1999 pinball expo in Chicago, Michael Gottlieb, Dave's grandson said that Slick Chick was among his personal favorite pinball machines of all the Gottlieb line. Even though over 4,000 were produced, it is considered extremely desirable by collectors today."

oldcarz has owned this game in the past.

To gobble hole or not to gobble hole?
That is the question. Is it a good addition or a poorly designed trap?
This argument will prevail for ages, one thing is for sure, I changed
my mind on the role of GHs in Woodrails having been educated by
the gurus of PPE. Does it work on this game? I don't know.
There are no left and right exit lanes after all.
I like the game play just fine with GHs, I simply don't like the artwork on the BG.
Dunno why. Just don't. A good and not easy game to master.
9.749/10
6 years ago
B13

One of MY favorite 1960's gotts of all time, I would never sell mine. This machine has a good rule set, a single gobble hole that when lit delivers multiple specials, the machine gun specials I call them. up to 7 and the playfield layout is just perfect. this game requires your best nudging skills and you will need to me a master of the 2" flipper to beat this game. If you can, buy one of these.

I have schizophrenic feelings about that game.
Right, the PF layout is really original. Here is a pin which is about bumpers! That's cool.
What I enjoy much much less is this infamous Gobble hole... and the Artwork. And the theme.
9.380/10
6 years ago
DMG

Possibly the best wedgehead, an absolute classic game that is brilliant in design and execution. It's difficult to explain just what makes this a great game, you have to play it and let it win you over. As with most Gottlieb EM's, the challenge is simple to understand, but difficult to accomplish, giving it that magic "just one more game" factor.

This is my personal "HOLY GRAIL" of EMs. It has everything a 60's EM should have an in some people's opinions shouldn't have.

The Pro's : Fun rules with lots of pop bumpers to light up to spell "slick chick"to light roll over buttons for higher scores between the sling shots. This game is fun and lastability should be years. I never ever get tired of playing this machine.

The Con's : (not mine but how others might feel)
Gobble Hole in the middle of the lower playfield. 2 inch flippers very far apart but with rubber posts underneath that can help you get the ball back in play instead of draining. The art work (love it or hate it)
The cab itself is rather drab with just white and a little bit of blue design.
The theme is cheesy 60's pinups on the backglass that some families wouldn't like to see in their house with kids.

The takeaway:
This game is just pure fun! I don't really care how they themed it. The rule set is fun the game is short and challenging and was probably a coin sucker back in 1963.

Rat_Tomago edited previous rating on November 11, 2013.
Rat_Tomago has owned this game in the past.

Highly recommended game, one of the best wedge heads out there. The object is to hit the pop bumpers in order spelling out slick or chick. Very challenging since they have to be spelled in order and keeps the player coming back to try and do better. Flippers need to work well for the game to be awesome, when tuned to play well, excellent addition to any collection.