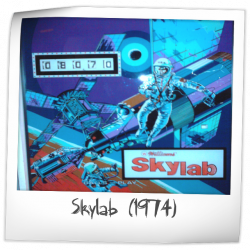 Glad to see more positive ratings for this one.

Really a pleasant surprise... Why?

Italian bottom.. A real shooters game. Careful bridging and tap passing can get decent control for an EM. Lots of strategy.. It's a single player, so you can set up the field for your next ball. Last ball is double bonus, so why not ready the captive ball feature to one shot away. When yoy drain, you start with double bonus and you'll have an easy aab with that ready and the double carries forward!

Consider the risk reward. I opened the Outlanes up all the way.. The captive shot is risky! Big point are there for those who shoot all over the playfield. Collecting the skylab letters and advancing two spots on the space lab feature. Complete this and an alternating Outlane can be set up with a reward.

Game is a true aab, yoy can get up to 10 balls to play. Of course, if you have it wet up properly.. This will never happen!

Inlane skylab advance can be made by shatzing.. Tight but doable.

And you already knew you liked the art.

koji has owned this game in the past.

Pinball is functional art and this game is a beauty. The play is better than you'd think looking at the openness of the pf. Getting all five balls on the correct side of the centre housing is challenging and harder than you'd think. Overall it's a bang for your buck pin as they're usually not too pricey.
6.435/10
3 years ago
???

This was the first pin I ever played as a kid. Very nostalgic for me, but I still tried to give it an unbiased rating. Hard to compare it to modern pins when I have such fond memories of this game and discovering the world of pinball before there were even video games. I remember the sounds, mechanical elements and playing the game as the greatest thing ever when I was a kid.
5.669/10
3 years ago
ACE

Its a cool looking game that will not hold the interest of most for more than a couple games,its just doesnt have the shots or anything really other than the very cool rocket,id never own it again personally
7.672/10
3 years ago
PTR

I totally agree compared to other games from this era, it can appear really simple. That said, if you max out the slope and install new flipper mechs, this game is really fun and the ball moves fast! It really achieves the theme of the ball flying through space at high velocity. I like that it can be set to add a ball. In short it’s a simple yet fun pin. Sometimes you want a pin that you don’t have to think too hard about.

Bottom line: slope it up, replace those flipper mechs, and send that ball across space!
5.573/10
7 years ago
DWK

The first pinball machine I actually ever bought. In terms of aesthetics, I think this is one of the best looking EMs (in terms of the backglass). Playfield is easy to interpret. The problem is in the gameplay. There just is not much to shoot for. The playfield is very spartan. Visually, your eyes are drawn to the center with the impressive-looking capture ball (holding five balls, with your goal to get them all on one of the two sides). Probably the most dangerous shot, due to the ball positioning to center drain, but given the 3-inch flippers even that risk is relatively low (especially for someone who knows nudging). Other than the capture ball, the only other thing one can really do is make orbit shots. The game flows pretty well, but that is because there is really nothing much that can mess up your shots. Overall, the game is very simplistic (especially for a single-player EM out of the mid 1970s) and just does not offer much long-term challenge or player choice on what to do for points while playing.

DennisK has owned this game in the past.

Nice space theme, simple yet fun and not as much of a drain monster as many of the Williams of the era. Great artwork!

the4horse edited previous rating on May 07, 2018.
the4horse has owned this game in the past.

Skylab is a game that looks like it is really simple. It is. And I don't mean in the good way. It's simple like the village idiot.

The Pros:
Christian Marche killing it once more with another one of his many art styles. This game almost looks as good as Space Mission/Odyssey. The trapped ball loop is a cool idea.

The Cons:
Other than captive balls, there is NOTHING to shoot for.

The Takeaway:
Nice to look at. A bore to play.
1
There are 8 ratings (that include a comment) on this game. Currently showing results page 1 of 1.