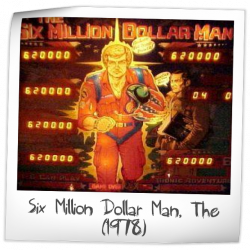 Great gimmick on six player angle. Classic pinball with both a post, a gate and a Bionic Man!
7.318/10
6 months ago
JSH

This is my favorite of the "standard" Bally SS games. Lots of fun here.
Since the layout is basic and not exactly unique it helps to be familiar with the theme and Bally seemed to do as well as they could have at the time. The kickout hole bleeps sound especially "bionic." The bonus countdown is really fun.

I'm not sure how long this would last in a home lineup. It's a bit easy. It's a lot easier to get those 5 drop targets twice for an extra ball than it is to get the 4 drop targets on the 1979 Star Trek 3 times, for example. The up-post is easy to get and easy to keep there. But it's fun and hasn't gotten old at the arcade, anyway. I'm not sure six people played this at once even in 1978.

Fun and neat and great bang for the buck.

*Wife approval* "This sounds a lot like your Star Trek!" And she lost interest shortly thereafter. I'm just barely old enough to remember the cool show and she wasn't born yet, so yeah, I do think nostalgia helps a bit here.
6.563/10
1 year ago
CAH

The big feature is the six player displays, but the game itself is pretty basic. It was a must have for me because of the theme, but if you had to have a 1978 Bally SS for game play, Mata Hari is the better choice. As has been pointed out, this is very similar to Evel Knievel, which has the better art package and integration. The art is still pretty good, and though the theme doesn't relate really well to the show that much (Steve Austin was a test pilot but the show is really about what happens after him crashing).
8.041/10
1 year ago
JLY

It's an older SS game, but for it's time, it's a fun and fast game to play. It can be challenging to complete all the rules, and difficult to gain the extra ball. I own this game and did some LED upgrades and they make the machine look much newer. It plays very fast but does have times when the ball rolls the entire play field and hits nothing, but that's part of the challenge. Overall the game is addicting, and requires fast reflexes.

This was my first pin in my collection. It is a perfect example of Bally SS in the late 70’s. The rules are simple, the shots are solid. I have other pins that are newer, but this one draws everyone back to it. 6 player option keeps everyone included. This is a fun game and is truly underrated. It will always be a part of my collection!
6.997/10
4 years ago
RHO

Six Million Dollar Man and Evel Knievel are very similar games, layout-wise.  Generally speaking, EK is the more sought after and beloved game.  But for my money, I’ll take Six Million Dollar Man any day of the week.  Chasing the 50,000 through the rollovers and side targets is a good challenge, and works to lure you away from any other strategy with the prospect of big points, because you’re always close to completion of the sequence by sheer randomness of the ball hitting rollovers or targets.  The play-more post and right drain ball diverter give players a false sense of security, but are good features to take advantage of if you can.  If Evel has the Six Million Dollar Man beat in one feature, it is that of the alternating lit spinner—drop sequence completion lights both spinners solid for duration of ball play.  You can rip the spinner from either flipper, which makes for an incredibly worthwhile strategy to employ while playing the game.  I wouldn’t argue that the art package is one of Dave Christiensen’s best, but it is certainly colourful and patriotic—very indicative of the television show of the same name.  Christensen adds his typical hyper-masculine touch to the game, so far as illustrating Steve Austin’s muscles ripping through his flight suit.  I will say that the cabinet stencil design is one of the best to come out of the Bally factory.  6MDM has all of the elements of an “early Bally solid state game”, and stands to be one of the best examples to represent the period.
5.980/10
5 years ago
HFX

The 50,000 for 3 side targets and 2 rollovers is wildly unbalanced. It takes too much effort to light the spinners. The pop up large center post is a nice addition, and the rollovers to drop it are placed in a very mean spot. There is little to nothing that connects this to the 6 Million Dollar Man, so the theming is lackluster. Simply having the 50,000 shots be the different parts of the body would have tied the game into the theme much better (rollovers for arms, the side targets could be legs, torso, head).
7.679/10
6 years ago
904

This is my first early SS game. Mine is fast and furious fun. I dig the gameplay, it's fast yet forgiving at times.

HighProtein has owned this game in the past.

Very cool theme. I've ways struggled to score well on this machine but enjoy it none the less.
9.381/10
7 years ago
DAD

One of my favorites from this era. I understand why some people do not understand the practicality of a 6 player game, and I could empathize with that as a kid sitting at a bowling alley having to wait. With that said, when I play now its usually around great friends while sharing good conversation and spirits, so the 6 player comes in quite handy as well usually have more than 4 wanting to play it. The playability and layout is fantastic with plenty to shoot at and well laid out missions/targets. Best Bally 70s game in my opinion. Just added one to my collection.

Love this game, I was a big fan of the show. The play more post is a good feature, typical bally game of the era. I loved playing this game back in the day and would love to add to my collection.

Great 1970's machine. The six player mode isn't practical, but at least its not six million? Anyway the "play-more post" is a great feature that should be mentioned. Some other machines must have them too (e.g. Power Play) but this is the only one I've had a chance to play. In short, I like the game and love the theme and artwork,... but it's the game play that makes this machine my young son's absolute favorite!