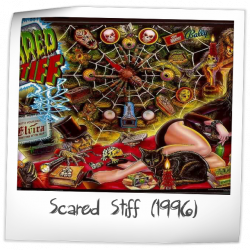 There are 439 ratings (that include a comment) on this game.
Currently showing results page 1 of 18.

A great game and one of my all-time favorites. I have probably played this game thousands of times throughout the years and have not grown tired of it. It is challenging enough for even competitive players. The variety of goals and shots, some more difficult than others, the ability to repetitively loop, the theme and humor all combine to make this one of the best.

Great, great machine that stands the test of time. Nice callouts, stunning artwork. Just wish someone would write some additional code. Went to wizard mode on the first day of owning it despite being a god-awful player.

Great game. Rules are simple to learn. Can walk right up and be successful. Shots are great. Not easy, need some skill, but not frustratingly difficult. The jackpot crate is awesome. Coffin shooting balls. Spinning Spider. The ramps look great with the bones and lights. A lot of fun in this game and it's easy to learn and play.
8.164/10
83 days ago
JRM

Fun game and easy to understand. I will always play this when I see it. Not a huge fan of the theme, but integration is spot on. The game is fun and everything comes together really nicely. I'd own one if I didn't have daughters in the house.
10.000/10
3 months ago
M U

there aren't that many perfect 10/10s in the pinball world imo, but SS is definitely one of them. the call outs alone make this cab one of the greats. there's tons of adult humor in SS which is such a welcome contrast to most of the kiddie machines you see in arcades (Guardians, Star Wars, JP). SS has some of the most satisfying ramps in the entire game of pinball, it feels great to hit jackpots in succession while in the Stiff in the Coffin multiball. timing the spider shots to get the extensions and chain them in in the most efficient way to get the most out of your multiballs is very satisfying.

I was very lucky to find a SS in collectors condition, complimenting my EHoH, I now want a EATPM to complete the trilogy of, in my opinion, the greatest pinball machines of all time time.

Not a bad game, it’s fun for a few rounds whenever I see it on location. My only major gripe is that there is a lot of SDTM’s coming off the crate in the middle. This is annoying especially when it comes off the plunger and goes SDTM which sometimes happens multiple times in a row and breaks flow of the game.
8.240/10
4 months ago
EJH

Great fun, diverse collection of toys and shots.
Theme is well integrated and the game keeps you coming back for more!
9.040/10
6 months ago
JLM

A very good, fun and attractive game though now I play it less since I purchased EHOH. The call outs are great and is truly fun for a few games. The only slightly comment is that it seems to get a little repetitive to me after a while.

jmatlack has owned this game in the past.

Fun game, I would add it to my collection before a lot of other games.

KingAndy has this game on the wishlist.

Currently own this pin- until recently my favorite of all time only to be dethroned by House of Horrors! The animations are great and the horror cartoon layout of the playfield and backglass are awesome. Gameplay is great- there's a lot of strategy into what order you go about obtaining extra balls, multiballs, and spider bonuses, but scared stiff mode is not to hard to get to and par for the game (however competing the mode is fairly difficult). Definitely an underrated classic.

Pure brilliance! I own this machine and it will never leave. Such a joy! Crate! Boney beast! Coffin! I also own EATPM and SS crushes it.

Not the deepest pin as far as modes, but still fun. Great pin for beginners or people who don't play much. My only gripe is i'm really not a fan of bash toys. I won't deny the crate is a cool idea and well integrated, but it's just not my favorite thing to shoot for. With that said, aside from the crate and the spider wheel, there's not much else playfield wise that sets it apart from the first Elvira. However, the artwork is a step up from the first machine. I still laugh at some of the call outs and sounds, but "Stop the spider!" callout gets kinda old. Fun while it lasted. Pretty to look at, but I don't miss it too much.

Update: Over time, the more I play other machines the more I find myself realizing how minimal the gameplay is on Scared Stiff. Pops are mostly isolated. Bash toys arent my thing. Cool ramps, but how many other pins have cool ramps? Shot variety just isn't there, so it relies heavily on it's theme and gimmicks. Obviously the theme is spectacular and you can't go wrong with Elvira, but the attractiveness of this machine has fooled some people into thinking it's an excellent playing machine.

I have owned SS for about 6 years. I love this game. Of the ones I own, this would be my last resort to sell. The deadheads never fail to crack me up. Meat head is my favorite, good head is a close second but who can complain about the later (tongue in cheek here). Getting the Stiff O Meter multi ball is the payoff for a few simple accomplished goals. Spider multi ball is almost impossible for me but I have gotten there a few times. A color DMD is a must have modification.
8.996/10
11 months ago
STE

The ruleset is not that deep but the nice layout, different shots, the fantastic lightning show and the created atmosphere overcompensates this point easily. Especially for beginners but also for intermediates it is still challenging and rewarding (scared-stiff -mode is immersive). In a bigger collection this game never gets old.

Dexavator has owned this game in the past.

Elvira is well integrated into the theme of the game, especially with the call outs. This is what initially drew me to the game. It was a nice touch to be able to set family friendly mode on or off. Set it to off to hear Elvira at her campy, sexy best.

Some say the rules are simple but I think the rules combined with the lighting and call outs make it extremely clear on what you need to shoot. The layout isn’t crammed full of hard to see shots. This would make a great learning pin. The ramps are very smooth, almost effortless. Shots aren’t difficult and perhaps that will turn off some players.

Little touches like the coffin opening up and saying “Boo!” randomly as the ball flies past it down the ramp gives the game more character. The Boney Beast dresses up a ramp not only for show but functionally (love the Beast’s eyes). Dancing Boogie Men mod is a must have addition.

As an overall package Scared Stiff delivers in all aspects of the game. Fun to shoot, great art and sound, well integrated theme. Everything is just so well thought out and put together..

I always play a game when I am out in the open. The skeleton ramp is so cool and I really like the box.

It’s a fun one to play. Elvira’s sense of humor and the theme work well together. The call-outs and music are outstanding. Playing in “scared stiff” mode is great as the music and heart-pounding get more intense the closer you get to 10. Many players criticize this machine as too easy. I wouldn’t necessarily say that, but you can reach wizard mode without playing for hours.
10.000/10
1 year ago
FVS

Extremely Rare and a MUST with color DMD and LEDS

Great game. Pretty underrated in my eyes. At least at the time of manufacturing. Artwork takes a while to soak up all the little things.