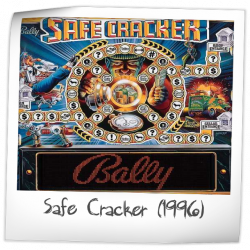 There are 74 ratings (that include a comment) on this game.
Currently showing results page 1 of 3.

Wow what a game. What a novel idea and game! Incredible.

Could be very frustrating but it's so different and you have such a specific goal. Plus the reward with the token at the end!

getting a coin never gets old

Very average. Awkward size. Not a game that keeps youbfromnwanting tk come back for more. Its ok.
7.787/10
5 months ago
MCH

When Pat Lawlor's legacy is written, Safe Cracker deserves a prominent chapter. What an innovative, gutsy project this must have been. I suspect it was the mid-late 90s and pinball was feeling the decline in interest. The idea of a series of pins that were slightly smaller, but offered a challenging pinball game plus a video/board game in the backglass was very clever and inspired. I heard this was supposed to be the first of many "magic token" pins, that would award tokens which could be used to play other magic token pins. Except just over 1000 Safe Crackers were produced, and the game did not revolutionize pinball. Remember Baby PacMan? This pin is actually an exceptional realization of a pinball game hybrid, with a video/board game in the head. You try to enter the bank by disabling the alarm at one of three possible entry points (the basement, roof and main entrance). Once you enter the bank, you turn your attention to the backglass, where a video boardgame begins. You basically roll virtual dice to advance your position toward the bank vault. Along the way, guards can chase you, robot dogs can send you back to the pinball game, and you can earn money or more time. The game is also innovative because you are playing against the clock, with a certain amount of time to access the bank, and then enter the vault and win magic tokens. Great concept, very well designed. Didn't change the industry, but with just over 1000 examples, these are valuable, especially with all the tokens and cabinet wings. A memorable chapter in Pat Lawlor's distinguished career.

Too bad this game is so rare and expensive. It's a mini game with mini flippers but it doesnt feel too mini. It's a great little oddity and it doesnt take up a lot of real estate
9.620/10
12 months ago
TOM

The most unique game I have ever played. I love the board game and the fact that you get a token if you make it into the Vault.

The last Bally Williams I keep at home, after all the ones who were here in the past.
I love this game.
Hightly undervalued game just because it is rare and not so many people can assess it.
Will never leave my house.
Pat is the best !

Some people dont like differnt and walk up to this game with a closed mind. I did at first but once you get over it and aim to have fun its an amazing game

Robertstone0407 has owned this game in the past.

"Safe Cracker" is like "Who Dunnit?" without the charm, wit or smooth gameplay. The concept is really cool but it's all lost in translation and you get sick of "stop-n-go", especially when the "stop" doesn't make much sense: you crack a safe and basically stop a roulette-style safe wheel at a certain number. You'll get a bunch of cash, a token if you're lucky or you'll get a guard or some sort of robot dog that you have to "defeat". One of the things I really do like about this game is infinite number of "lives" you get. The object isn't to give you three chances to crack a safe, it's to give you a chance to crack the safe in a given amount of time, period. After you run out of time, you have ONE life -- that's it. If you lose it, you're arrested. The great thing is there's a lot to shoot at, despite the much smaller field and flippers. The bad thing is that it's pretty easy to hit ramps and targets and it feels, at times, like you're just going in circles until you finally get the shot you want. As for the art...meh. This isn't the prettiest thing to look at and it's mostly lights. Props for using the backglass, though. I'm a sucker for stuff like that. Still, this is disjointed and not really for me.
9.280/10
2 years ago
TIM

When I walked up to this machine and saw the size of the flippers, I thought, “I’m going to hate this game!” I was happy to be proved wrong! A very fun game.

TimO has this game on the wishlist.

SafeCracker is a fun unique game that is different than anything else available. Amazing design by Pat Lawlor. I like how you set yourself up on the board with different entraces on the playfield. Getting into the vault is cool and having a token roll down the glass never gets old. The assault the vault mode is a fun extra multiball with an excellent DMD intro. The lastability of this game is only soso. With extensive time on this game I found I did not like the smaller size playfield and flippers compared to a regular sized game. It just did not feel as good to shoot. And the stop and go with the board game gets tiring with consistent play. Great alternative game that fits well in a large collection.
1.000/10
2 years ago
CMW

very funny game,you want to play again ans again,it's a verydifferent game of what i have and that's why childs and i love it
7.537/10
2 years ago
RCT

This game is crazy! I really liked that it's timed because every time I play it, the balls go strait down the middle and the flippers are super small. Pretty cool idea of breaking into the bank, being chased and rewarded. This machine is much smaller than a normal pin, but is still very cool. The best part is if you are able to get a reward token to shoot out.
9.080/10
2 years ago
BO

A great gimmick game that manages to bring me back every time. Not only do I love going for that coin, but I like how the game attracts beginners and pros alike. It's a very unique game that doesn't sacrifice any fun for the gimmick. Too bad there aren't more of them out there...
6.730/10
3 years ago
RCT

Felt like an amusement ticket redemption game while playing more than a pinball machine. Enjoyed the artwork, light show and call outs. Simply stated: it’s a show game rather than a players game. This caper is busted.
8.380/10
4 years ago
JJL

What a great pinball. One of my favorites at yegpin.
Very unique. Never got to play one and this one will not disappoint.
It seems small but plays like a regular pin. Great and fun pinball.
Too bad they are increasing in price.
5.414/10
4 years ago
???

This is one of Lawlor's best games. One of the most unique in pinball. This game is one that gets played the most when pinball and non-pinball people come over. The look of surprise when they win a token is very memorable. A game that was ahead of its time.

plinde1 has owned this game in the past.

this is very different from regular pinball it is on a smaller scale,nice flow, looks great, plays great ,solid machine, cute..lol....its very fun to play, theme works very well,one of a kind game play, not many out there !! play it if you see one...in the top 5 unique machines..not a keeper for me !!
8.532/10
4 years ago
TBK

This is just one of "niche" pinball machines that some people are going to like, and some people will not.
Predominantly because it is a "limited time play" machine, and even if you know the rules it still have be unforgiving.
Games can be over VERY VERY FAST, if you are just randomly unlucky.

It is a collector type of pinball machine.
The artwork is excellent, but the integration of the backglass is superb into game features.
It has SO MANY "hidden" game features going on inside the machine, it is boggling.
There is significant strategy involved in "breaking the bank".

Collector's quality examples go for big $$$ for reason.
The wings, dome, and proper token dispenser with the plethora of different token styles is IMPORTANT.
If you only want "one" pinball machine in your collection, this is NOT the machine you are looking for overall, especially if you are starting out in the world of pinball.
If you want to augment your collection to include a unique machine from pinball history (and its small stature) this is a good choice.
9.400/10
4 years ago
RLP

One of the most overlooked games in the long list of unique tables out there...

I think what scares people away the most are the small flippers, and overall footprint of the cabinet, but once you dive in and see how deep of a game this is, you will be hooked for life. Hilarious speech, frantic and precision oriented shots, and unique spin on the overall life of your game being timed gives this something you can't really get in any other game.

The initial marketing was rather corny, but in my opinion this truly is one of Pat Lawlor's best, released in an uncertain time in the history of Pinball. They needed something to breathe new life into the game, and this hit the mark. It's just too bad they gave up on the Token Pin idea, as I think it's super fun, and one of the best multiplayer experiences you can have in the arcade space.

I'm usually a horror themed pinbidiot, but this is the one I had to get regardless of the theme. You should give it a go too (and yes, I realize it's quite a pretty penny for one game, but once you dive in, you won't regret it!).

Pros:
- Surprisingly deep ruleset in both pinball and board game modes.
- DMD animations match perfectly with the shots.
- Magic Token is an innovative idea that sadly never caught on. :(
- Drop targets! :D

Cons:
- Missed shots can make the game end really quickly.
- Hard to find tokens won in dark bars.
- Candy 2000 can get really annoying sometimes.
- Cellar shots when the target is all the way back can sometimes brick right back out.
- Flippers are useless unless they're at full power.
Next123
There are 74 ratings (that include a comment) on this game. Currently showing results page 1 of 3.