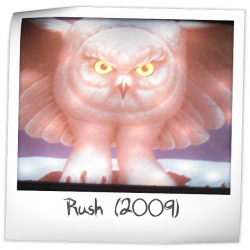 This was a re-theme/re-build of a Williams Getaway made by Brent Butler. It included custom artwork and an upper playfield. It was built using the WPC boardset with custom software (including diagnostics), a custom sound board, and a custom flipper board.

It also has a built in jukebox feature that can play music from Rush while the game is idle.

There were only 2 built. One was originally built/intended for Alex Lifeson, guitarist for Rush.