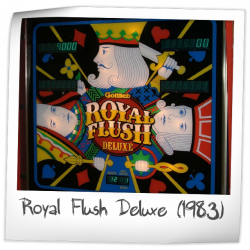 This game has received 7 approved Pinsider ratings. 8 more approved ratings are needed to get a rating and for it to be eligible for the Pinside Pinball Top 100 ranking.

It's much prettier and plays faster than it's E/M predecessor between the stronger flippers, rubber on the posts, center post, etc. TONS of fun. If it had chimes, it would be a keeper, but since the sound is so much better on the E/M (which I also own), I'll send it to a new home at some point.

The electronic version of the Royal Flush is interesting because the rules are simple to understand. Gottlieb has retained the mechanical spirit while modernizing this game.

Finally with a simple idea, Gottlieb produced a successful and unpretentious machine.
7.001/10
2 years ago
JLH

Great game for any level, it is easy for a first time pinballer to understand due to the poker theme.

this one has some loud effects for a pinball game..has one touch which let's you shoot your ball again if activated
5.979/10
6 years ago
JDC

I just had one of these fall into my lap and this is my first opinion before any shopping.

This is a fun game and a remake of the '73 Royal Flush. I have never plaid the original EM but gather that this plays very much like it older brother..
The rules and scoring are pretty basic. Has some what of a skill shot with the joker next to the pop bumper lighting the 30K rollovers on the lanes. The knockdown targets to lock in card hands for bonuses is a great feature but once they are all down I find my self looking for more goals.

The playfield may seam simple but it can be very challenging. The out lanes seam to love eating balls off baddly placed shots. Certain shot into the upper playfield seem destined to float right back down the middle, somehow missing the flippers and center post and dropping right into the drain.
That being said I find the Joker shots to be rewarding and feel like this playfield is layed out to make you choose your shots well. I am finding it to be challenging in a good way.

A fun game and a fairly low production number. Glad I have mine as it's my first pin and fun to play but probably not something you would seek out unless a collector or you have nostalgia for this table.
Cheers!
6.560/10
7 years ago
ZUL

Royal Flush Deluxe is a remake of Royal Flush/ Card Whiz, one of my favorite 70's Gottleib tables. The design is a deceptively simple game. An asymmetrical PF from Krynski that keeps on giving and giving... You think you have it down and... WHAM! your ball is out!

The Pros:
Great shots. Tough shots as well as seemingly easy ones that send your ball towards the outlanes in no time flat. Classic Gottlieb design of simple, but not easy. You want the game to sing... you better earn it. Keeping control of the ball near the flippers is paramount. The space between them is a gaping maw of pinball death. Considering this game was released in 1983... it would seem a bit old and slow compared to other games, but the PF design is a great one.

The Cons:
The Saucer on the right is a random shot. shooting for it never drops it in. The bonus system is a bit caddywampus (tm Tom Grobe) and the artwork is a step back from the original BG and PF artwork. The Bg in particular looks flat and devoid of life. The SS game rules/scoring somehow make this game feel different and not in a good way. Give me EM bells over the SS sounds of this generation of design any day. A nearly perfect copy of the game into the SS generation ultimately shows an unwillingness to keep up with the times by the people at Gottleib/Columbia pictures. It's sad really.

The Takeaway:
Flipper skills are a must and if the ball is heading on the way to the outlanes, it's probably gone. Control is key and that bank of targets at the top is designed to reflect the ball at an angle and get it bouncing sideways. At 5 balls, the game times average about 3 minutes. Shorter than most 3 ball games on my modern tables. A perfect example of Krynski design at the height of his pinball design powers! Even so, one still has the feeling with this table that this game's time is past and gone... get the EM instead!

Update:
I recently got the chance to play a really nice copy of this deck at the Pinball Hall of Fame. Royal flush deluxe. Bonus scoring and target bank reset. Sounds are qbert cool. Minor of diff over joker lanes. Metal posts on outlanes don't help ball times. Is it the same as an EM copy, nope. Do I like the EM variants better, yep... But this copy was deadly fast and I like the little lip at the end of the upper arch. Fast and deadly when maintained properly. I like the bank reset as well. Scores upgraded accordingly.