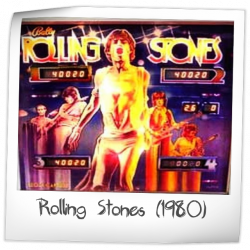 There are 11 ratings (that include a comment) on this game.
Currently showing results page 1 of 1.

Solid 1980 SS machine. Fits right in with the rest of them.

I prefer games of this era to not have ramps or split playfields, so this one is ok. Backglass appropriate with Mick being front and center. "Miss you" and "Satisfaction" hints for songs fit right in.

I really like playing this game. Lots to shoot at, drops, the horse shoes (u-turns). Easy rules....spell R-O-C-K. Really like the play field art. The backglass is a little dull. Get through the horse shoes a few times for the SPECIAL. Difficult to get to the saucer to collect the bonus. Has the "one more time" effect on me. The downer with this game is the lack of Stones music. Guess it had something to do with the license agreement. Never the less, I find this a really fun game to play.

DAVE865 has owned this game in the past.

This one did not click with me at all. Lots of dangerous shots, the u-turns and associated scoring posts (this one was new to me, scoring posts, weird), and the tight left drop target shot were killers when I played. From the right flipper I'd tap pass or aim for the 1-2 since bonus multipliers seem very valuable. From the left I'd just go from the right drop target bank which led to decent scores. My left saucer shots were always rejected, it could've just been the game setup though, really hard to get back up to the top lanes. Art package is nightmare fuel.
7.676/10
6 years ago
RON

I have only played the Rolling Stones a couple of times but I really enjoyed it. I think it's very under rated . The play field is layed out well with some good shots and ball movement. Several knock Stern for putting "Nick on the Stick" that travels across the play field but I think it adds a nice skill shot to the game. Wish the game had a juke box selection on it like AC/DC has but that was a couple of years after the Rolling Stones was made and wasn't thought of at the time. Over all I think its a fun game to play and would like to add to my collection some day.
4.549/10
7 years ago
ZUL

The Rolling Stones... pinball. The First Rolling Stones game from Bally is a game that probably had more money spent on the license than the design of the game and it shows.

The Pros:
Both U-turn shots mid-field require fast reflexes and good aim. The left orbit is a tough shot with the plastic guide into the saucer at the top. You have got to make it though. This is your money (bonus) shot. When waxed and maintained, this game is FAST! Jim Patla had some interesting ideas here... A build bonus and collect plan is always a good one.

The Cons:
One of Greg Freres worst art packages. It causes me real pain to say that, but it is what it is. On the BG, Mick looks like he is sucking... I don't even want to go there. This game is early in Greg's career and must have been a rush. It sure looks like it. The plastics look like a comic book with bad color registration and if I didn't know they were the Rolling Stones... I wouldn't know who these jokers are. The band looks like zombies. Which for all intents and purposes... they are today. The left orbit would have been so much better with inline drops. Scoring is horrendously bonus heavy. 5x bonus and hit that drop and saucer over and over. This game needs more digits on the score displays. Maybe 2 extra digits. The first time I stepped to this deck, I rolled this game twice without even trying and walked away.

The Takeaway:
A decent game (not a great one) to play when setup correctly. A hard game to look at any way you see it. Fans pay outrageous sums for this table, so as a player, consider where you are going to put your ducats, namely on better playing pin-tables. For some reason, The Rolling Stones have the worst pinball designs licensed to their name. Could it be a sign?

Update:
I got the chance to play an incredible version of this table that was made up of 5 different decks. All the best parts were combined into this single deck. I finally got to see the oscillating scoring on the drop targets and how by dropping the last target you score the lit value. Kind of like a skill shot, but requiring flipper accuracy. VERY WELL DONE. Why have we not seen this in lots of other games? Those loops are fast and furious being that close to the flippers. The saucer is a tough shot (that bumbles out quite a bit)... but once again... still completely un-balances the scoring of this game and makes another digit on the display a necessity. Zombie Charlie and some guy on the right hand side of the BG crack me up! And... Mick still looks like he's huffing gasoline. Greg Freres... what have you done!?!?

A boring game to play... if you're a fan of the group, then this would be the only reason to want this pin in my opinion... or you collected pinballs and you really want to have them all... or you collect pinballs and are mainly interested in games that have value as a kind of boasting thing... Or for some bizzarre reason you just happen to be attracted by the game play... or it has some nostalgic connection with your youth... I think that covers it...

I recently found one of these to play after a break of thirty odd years. I must admit I was pleasantly surprised. Fun to play, especially making those side horseshoe shots, building them up, then nailing the special. Making the "satisfaction" target and the bonus saucer behind is, erm... also satisfying.
The sound is - let us say - "primitive", it is after all a late 70's SS Bally. I'm also not keen on that backglass with the dishevelled Mick, but that is probably a matter of taste.
This is a "cult" machine, so expect to pay a lot more than usual for a late 70's Bally. I certainly won't be buying one for the price they go for!

1
There are 11 ratings (that include a comment) on this game. Currently showing results page 1 of 1.