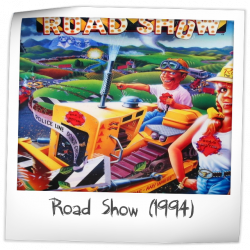 There are 261 ratings (that include a comment) on this game.
Currently showing results page 1 of 11.

Rod Show is one of those games that I used to not really think much about due to not having consistent access. However, after owning it for some time, I have grown very fond of it.

Pro’s:
Love the layout: especially the ramp shots. The fact that the combo’s relating to them work so well is a testament to the design of the game.

Modes, while a little basic, are still fun to play. It’s crucial to play them well or else Super Payday won’t be worth nearly as much.

Animations are just phenomenal, some of the best from the era. Backglass and cabinet are pretty solid.

Build quality is excellent: as makes sense for a Bally/Williams.

Sound is great if you love country music: sound quality is top notch for the time due to DCS sound.

Con’s:
Playfield art is kind of bland and barren. Not bad, just not a lot going on.

Game ruleset is certainly linear: can be a put off for some. I’ve heard the 7.0 code fixes this, which I will install soon.

This pin is a ton of fun. Have had it for years, and don't plan on ever letting it leave. Still makes me laugh, and I genuinely have fun playing it.

I love this game. It's on my wishlist. I hope to acquire it someday.

ChefGuilbert has this game on the wishlist.

I've played this game over the years and I finally got to own a great example of one. You might not like the theme but the presentation and the amount of things in this game whether it be all the modes or all the toys are impressive. A great job was done in making this pin!!!! Definitely a keeper.

jdzwir123 has owned this game in the past.

Played online and at Pinball Republic.

A very underrated pin with deep code (for its era) and a wide variety of shots. I personally prefer it to the Addam’s Family, but - like many people - I am slightly freaked out by the talking heads.

A brilliant buy given how much so-called ‘top-tier’ pins go for.

Super fun game with a deep rule set. Fun to play, easy to play for an member of the family at any skill set. Red and Ted always a good time when crushing cars.

Complex game. Requires understanding and growing with the game. Not a simple quick learn. Great addition to any collection!

Recently added this game and it’s been fun exploring it and trying to advance further west. This is such a Pat Lawlor game. Lots of unusual and cross-playfield shots keep the action interesting. Double plunger setup like Funhouse, plus two talking, ball-eating heads make this a unique expansion of ideas Lawlor used in Funhouse. The ramps are fun to shoot, the blast zone is a cool shot and most shots are easy to make, except the Bob’s bunker/lock shot and Red jackpot. The code is well known to be fairly linear, advancing east to west as you visit cities and collect objects. There is more to do along the way, and although a widebody, the game doesn’t feel floaty and instead features pretty good flow. The music and callouts are a bit silly and repetitive, to me. The artwork is decent, and the theme is very Lawlor, with elements of travel, construction, weather, and natural disasters seen in other games like Earthshaker and Dialed In. Still a lot of pinball for the money, but it’s not the steal it was years ago. One of the best of the “second tier” of 90’s era pins, not quite as good as the classics from that era, but better than many of the others.

Decent game to play. Deep ruleset but nothing much is exceptional about the game. The two heads are pretty cool.
7.136/10
11 months ago
JMO

I love it. Totally unconventional, spooky talking heads and politically incorrect: a lot of playing fun!

It's a great game

This wide body game has loads of shots, quite a few lateral shots which make for unique shots, Pats name Is written all over this game.. and it being one of the last super pins, it’s also an incredible value as far as 90’s Williams games go. I do recommend the 7.0 rom for this one.

Nesman has owned this game in the past.

Really love playing a few games whenever I find it on location or in a collection. I can imagine it would get repetitive in a home environment...but I still want to own one sometime soon.
7.496/10
1 year ago
CAH

My spouse doesn't like this game because she doesn't like Red and Ted (She doesn't like Rudy from Funhouse either). I like the theme having been in Civil Engineering consulting for much of my career, and this pin is definitely true to it's theme. Cities can be repetitive but I understand the new Soren mod makes some good changes in that area - would definitely like to play a version with the new code. Overall, this pin is probably under rated and maybe I did a little too.
7.924/10
1 year ago
PO

Built like a tank, with every inch packed with something fun to shoot at. Great audio design with constant chatter from the severed heads keeping you company. Problem is, it's not long before you hear every line of dialogue, so you'll be sick to death of them both before too long.

The game jokes about making it to Friday and getting your paycheck, and this game sometimes feels like hard work.

Great comedy moments with the stereotypical Taxi driver, breaks up the monotanous journey across the USA.
6.729/10
1 year ago
STV

Game is ok. I would rather have a demo man as a widebody machine in my lineup

Nomadwltnot17 has owned this game in the past.

Another awesome game from top game designer Pat Lawlor and adding software from Ted Estes. June Carter cash daughter “RED” is the BOSS! with fun callouts and incredible singing, perfectly matched with theme. I love the theme and being California native spending an inordinate amount of time on the highways and byways you really can relate, let’s rip some Road! Touring the cities and adding the extra flippers makes shots challenging and connects you to the themes. The shaker motor adds depth and works well with gameplay. Lighting is fantastic. Fun factor is one of best Lawlor game, don’t underestimate this machine.

If you can find this game, buy it. Everyone that plays it after playing new “fancier” games comments on how they wish they had a Road Show instead. There is just so much to get into as you advance across the country. The Red and Ted heads are awesome (did not think I’d like them long term). See if you can find the hidden sound bite from another Lawlor game ...