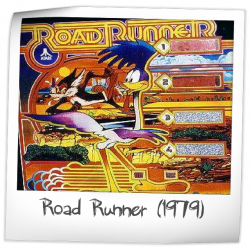 This is one "rare bird" of a pinball machine (pun intended).

I have had the opportunity to play this machine ONCE.
UPDATE: On 14 May 2016, I had a SECOND opportunity to play this prototype game, but it was NOT the original prototype. A pinball collector BUILT an Atari Road Runner using a partially wired playfield, cabinet, and boards on display at PAGG. The game played just as well as the original game, but the owner did not have a NOS backglass.

I really could never understand why this game never made it into production.
Maybe it was a design license issue?
Either this or Atari's bankruptcy woes.
Not a lot of historical data exists now, mostly as this was "before the internet".
It is a solid single level design that is a cross between Paragon and several other early Bally games of the period to provide a comparative example.
When properly angled, it actually was quite a fast game along the outer orbit loop, particularly for this era.

The shot angles for the orbits are very TIGHT, which makes for some required skill to play the game correctly.
Pop bumpers always seemed oddly placed in my opinion.
The double captive balls behind the drop target bank was a neat idea.
This idea was reused in BBB years later.
The other captive ball seemed like an unneeded "extra".
Sounds and music are unremarkable, typical of Atari games of the era.
Ruleset basically recycled, and really do not know if the game actually was even finished in this era.
Excellent backglass image.

Just another "hidden gem" from pinball history.
It would be nice to see this machine at a pinball show again, and now I did!
I wonder where the original is hiding now...

xTheBlackKnightx edited previous rating on May 16, 2016.

1
There are 1 rating (that include a comment) on this game. Currently showing results page 1 of 1.