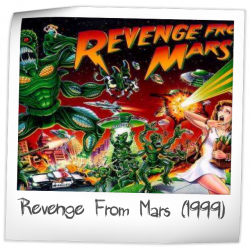 There are 310 ratings (that include a comment) on this game.
Currently showing results page 1 of 13.

Enjoyed having this game in my collection. As someone who grew up in the 70's and 80's, I enjoyed the fusion of pinball and arcade game elements. Easy to learn rule set. Fun call outs and audio.

Smiley2002 has owned this game in the past.

Its definitely a different bird in the pinball world, friends who dont play alot of pinball are drawn to this game the most in my collection. Call outs on this game are easily in the top 10 ever. Updated code from mypinball.com is a must, adding drunken flippers which is hilarious.

Updated from 1.5 to 2.24 from myPinballs and what a great upgrade. Super fun to play, has that one more game appeal. You think it's easy, then a missed shot and you are eating humble pie. Love the playfield art, the projected display, the funny sound clips. 100% recommend this game.

the shots are a little too simple, but some of the higher levels are super fun (Like hypno mode)

HelloGuy has owned this game in the past.

The new code is absolutely brilliant. Changed the game from a weak 8 to a solid nine in my book. I sold mine to a good friend and I still get to play it and he has made it a phenomenal machine with all the upgrades.
9.660/10
5 months ago
SYL

Absolute Top.
I have tried one 2 months ago.
Can't sleep fine until I found one 2 weeks ago.
Got it like a brand new one.
Now I can't stop playing it.

I remember when this came out, a lot of my friends were really huge fans. When I finally found a place to play it, I was super underwhelmed. I thought the transitions to/from the screen were "meh". It just felt gimmicky to me, and detracted from the physicality of the game that I love so much. It's not bad... it's just kinda bland to me.
8.924/10
6 months ago
JR

This is a fun game. Some people might be put off by animations and the concept of a 3d playing board with the monitor reflection on the playing field. I just found this game to be unbelievably fun and a snapshot of the early 90's culture. I would definitely have this in my collection.
9.020/10
6 months ago
TER

What can I say, the Pinball 2000 platform should have stuck around..unfortunate that Williams (my favorite pin company) sold out the division to make their money on gambling machines...oh well. Another brilliant Gomez machine..the monitor feature knocks this outta the park..even for star wars ep. 1..Nothing in the pinball industry compares to it, tech-wise, even in 2022. Artwork, sound design, theme (and sequel to Attack from Mars) is ‘outta this world’ lol. The playfield design is a bit too symetrical for my tastes, but it actually compliments the 3D animations that are happening on the playfield..I can understand why he designed it like this..otherwise it would be too difficult for first-timer players in the arcade, back in the day. Super funny callouts that never get old..Awesome music.(same guy that did AfM, MM, etc). I brag about certain machines that are ‘unique’ to their design (e.g. demo man handles, glove toy on JM), but this machines’ gimmick is way above that with shooting virtual projected targets via the monitor (and the special metalized pf glass-unfortunately you can’t replace this with regular glass-so take care of yours if you have one!). And since I have a SW ep. 1 playfield, prism card, translite, and shooter rod, I can swap to SW in about 15-20 minutes. And adding a Nucore computer system with optional LCD screen is cool to do down the road) I’m not an LCD guy, but I think this particular machine deserves one. It’s a keeper!

After playing for the first time with a pinball 2000 pin (RFM), made me want to have one... and I'm getting myself a RFM

Why these Pinball 2K models aren't in the top 10 I'll never know. Very fun and approachable game. This is one of the games that new players should try out first. Very forgiving. No auto-drain shots.

A great sequel to a classic pin. The main knocks I have on it are that it can be a bit dark so its hard to see the playfield though I think that was done on purpose to allow the screen to be more reflective. The other knock I have is that its an easier game than most so it doesn't have as much lasting appeal as it should.

Ah, pinball 2000… what can you say that’s not already been said?
Well, I won’t recount the sad Pinball 2000 story, watch the documentary about it if you don’t know. I don’t even want to talk about the merger of pinball and video. It was both brilliant and stupid. Enough said.
I have almost bought several different copies of Revenge from Mars over the years. Almost as in “I came to my senses.” Many of the cheap ones had monitor issues or display board problems. There are modern ways of fixing those problems, but then they are no longer original. I suppose that’s a word of warning to potential buyers, not that it can’t be fixed or modded with modern stuff, rather you are maintaining a pinball machine and a videogame in one box. Double the work and the original monitor is quite heavy.
The game itself is a delight. Being a sequel to Attack from Mars, it doesn’t live up to the spectacular original, but it’s not disappointing like Firepower II. Trying new things it not always bad.
When I first played this machine back in 2002 (late to the party again!) I didn’t like it. The playfield is very short, many of the targets are sensors on the playfield that the monitor makes an animation for, via reflection, through the playfield glass, and so on. I must have sounded like those people in the late 1970’s who rejected solid state because pinball must have gears and bells and chimes.
It grew on me as I played it more but, even today, I feel it’s not a great idea, and certainly not a good pinball videogame hybrid.
But I rate the game very highly, and almost bought one several times… why? Because it’s weird and unconventional? No, because it’s really fun.
It’s not Baby Pac-Man!!!
The animations are good, voices are annoyingly loud, music is solid, and the gameplay is entertaining.
I don’t think that I will ever own one, but I do enjoy it when I am out in the wild, like last week in fact.
6.887/10
1 year ago
EJH

This game is fun but the novelty of the animations on the playfield get old after a while. Definitely betters than Star Wars Episode 1.
9.500/10
1 year ago
PO

This game was much more fun than I expected - shooting at the screens was great, and the callouts and animations are first rate considering the age of this game.

Fun little game, upgrading the inner projector tube tv to a modern monitor is a huge game changer! The call outs are entertaining even if they are a bit of a 90s time capsule......
8.776/10
1 year ago
AAA

I have owned this game for nearly a year now, and this game is fun. Not the deepest game out there, but more variation compared to Attack from Mars. This game has a number of funny callouts and animations and still is fun and amusing 20+ years after it was released. The screen integration is well done and does not detract from the game, its a shame that they weren't able to expand on pin2k. This game is a solid classic!
7.087/10
1 year ago
ECW

Ford time playing a pinball 2000. Kind of underwhelmed. I definitely want to find one somewhere else tho.

This playfield was dark. So dark I couldn't see the ball. I didn't even know there was a right ramp bc it was so dark.

It was fun. Very novel idea shooting into the video screen and it's is well executed. But, even with that it wasn't super fun.

Rating this on the new fan created code,
Game is very fun and very fast. The rules and screen are well done, stereo sound as well.
HyptoBeam mode is fantastic.
Put some LED’s in to brighten up the playfield.
Cool game for any size collection.

Owned this for a long time now. Always fun and was ahead of its time if you look at Stern and JJP Etc screens now. Theme is awesome and 3D screen is a lot of fun. Wish the playfield was a little bigger or normal size but the package of Pin 2000 had a lot going for it.

Picked one up the other day, must admit that this took me by surprise of how fun it is, great call outs great flow and a overall great game!

Mato has owned this game in the past.