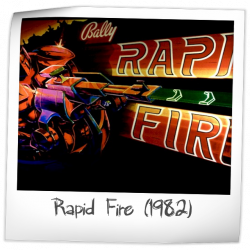 This game has received 7 approved Pinsider ratings. 23 more approved ratings are needed to get a rating and for it to be eligible for the Pinside Pinball Top 100 ranking.

So to start, I have a pretty big arcade. That's probably a must for owning this game.

Since I wanted a 'cannon' game like this, I looked at both Hyperball and Rapid Fire as possibilities to add to my collection. I played both, and this game won the head to head showdown.

First, it reminds me of an old 'game and watch' LCD version of Space Invaders, where advancing invaders march down to build a mother ship, which when assembled, will shoot lasers at you to destroy your cannon base.

Last but not least, it has a cannon that shoots ball bearings across the playfield at a rate of over 200 a minute.

It also has a couple of other controls that make you multi-task. This is what puts distance between it and hyperball, IMO.

Your thumb controls a 'shield' light, which you can use to block the shots of the assembled mother ship, or the ships firing at you from either the left or the right side. It's actually quite difficult to master this while also firing the cannon to defeat the oncoming alien hordes.

There is also a 'panic' button that will wipe everything off the map if things get to hairy, and a 'laser cannon' button that launches a green missile up the center of the playfield.

There are 'FRENZY' targets on the back row of the machine, and once you knock them all down, you get 10 seconds of auto fire to help in kicking alien rear-end.

For the first few plays you'll be completely lost, but it doesn't take long to get an idea of what is going on.

In the long run, you'd probably hate this game if you only had a couple to choose from to play. But, if you have a larger collection and use it to 'fill the gap' between many other styles of games, this one can be quite a rush... Try to get a million points. Go ahead. I dare you. ;)

Pinball shooter version of Space Invaders. Fire the balls at the aliens as they advance to you. When one gets thru you lose a life. Fun to play once or twice. Definitely not worth wasting precious space in your arcade.
6.326/10
17 years ago
???