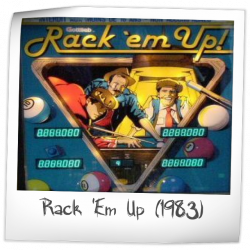 This game has received 6 approved Pinsider ratings. 19 more approved ratings are needed to get a rating and for it to be eligible for the Pinside Pinball Top 100 ranking.

Game is hard for a beginner to understand at first, many of my friends do not understand the lane change so it takes some education there. Some of the shots are impossible / really hard to make unless the machine is in perfect working order. Once you get into the game it is a great classic pin! It is harder to play on 5 ball than 3! You are targeting the balls that are "blinking" to put into the rack, on 5 ball there are less options available so you have to constantly hit the spinner or the 8 ball pocket to get more options. I now have mine set for 3 ball and it is a lot more fun and is a great game to work on your targeting and shot skills!!! This is really a players machine, not for a quick casual player but if you love pin it is a long lasting fun game to play against friends!

Rack 'Em Up! is a pinball game coming from a struggling Mylstar in late 1983 when the video game crash was plummeting into the depths or arcade hell.

The Pros:
A fantastic layout with lots to shoot for. The shooting lights that need to be hit means that the willy-nilly shooting for "any" target are over. Snipers only need apply. The lane change has some interesting rules as well. This game is a great introduction to pinball skills table. Aiming from up and down the PF to shatzing the inlanes is in effect! The spinner is awesome when lit for points as well changing that hard to hit flashing drop target. The pops do their "randomizer" job well, but never are in the way of critical game shots. Comparable to Williams' Laser Cue in terms of target shooting capability on a single level. There are 11 shots as compared to 16 on Laser Cue, but there is more nudging and "Gottlieb-like" skills required for this table as compared to the pure shooting fury of LC.

The Cons:
After 3 racks are completed, the "meh" factor skyrockets through the roof. The extra ball is a "random" award as compared to being skillfully earned. The art and sound package is horrid! I hope your displays are good. 7 digit gottlieb displays are not always easy to find (correct me if I am wrong!). The scoring becomes unbalanced once the spinner is lit, but then again, ripping spinners is always a great time.

The Takeaway:
A relatively low production game that is a pure pinball skills player. John Buras did a brilliant job with this design and kept the BOM in the survival range. While REU is not the prettiest deck you have ever seen, this game has it where it counts. IN THE GAME! Most likely to be found in a classics bank at a pinball tourney in the near future.
6.967/10
6 years ago
JVE

Rack 'em Up is a nice little back to basics-game from a time when pinball in general was in a bad shape. The layout reminds of machines from the 70's.

Gameplay is nice and makes the game more interesting than its layout suggests. Goal is to fill a rack of pool balls by hitting corresponding drop targets or rollover targets. But only a few targets are lit at a time. You can change the lit targets by pushing the right flipper button. But only at the start of each ball or when the ball exits the 8-ball lane on the top left. The spinner also changes the lit targets (balls), but randomly.

The sound effects are simple but appropriate. The music loop is ok, but can get on your nerves after a while.

I like the art on this game. Sure, it won't win any prizes. It is simple, maybe even onedimensional. But the simplicity suits the theme very nicely. The colours are nice and bright.

This machine is a cool change of pace from the newer games. For me, it's a good example where the whole is greater than the sum of its parts. Wax it up for a good challenge. The feature of filling the rack gives this one a pretty big 'just one more game'-vibe.