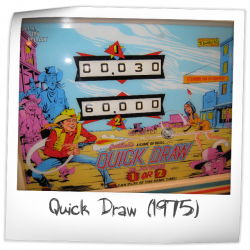 Quick Draw is definitely one of the most difficult EM's I have come across, looks easy but far from it, the angle and closeness of the drop targets are very deceptive. Keeps you wanting to play again, can be a bit of a ball drainer, but still the challenge of this game makes it worth replaying, Great looking back glass and playfield, not a game I see to often anymore, played a lot of its cousin Fast Draw in my childhood.

I have a Fast Draw (same game). To me the true genius thing about it is the situation of the drop targets. Even though they are relatively close flipper shots they are the perfect difficulty, where from the top they are easier (but still not gimmes) down to the most difficult at the bottom. 20 years + and I still cannot master them and never will.
7.936/10
1 year ago
DOC

A friend bought this for his custom horse barn..Stopped working after 2 plays....carted it to my house for a refurbishment and trouble shooting...Doing this as a favor but was surprised to find how much I like the game.....interesting and unique to my collection..


Touched up the paint and she's gorgeous...don't want to give it bacl!

austinhealey has this game on the wishlist.

I played this when I was a kid. Loved it so much I bought one last year. This machine my favorite EM machine and one of my favorites of all time. I love drop targets, so this really works for me. It has simple, easy to follow rules and the playability is perfect for me.

I'd have thought from the layout that this game would get boring quick but there's an aspect to the layout the makes for amazing shots. The geometry often encourages you to shoot the left side when trying to hit a target on the right. I can't think of another game that taps into the bank shot for a design feature in the same way. Excellent game all around. Art, chimes, gameplay you name it.

Worked out a deal for a QD and pounced on it quickly as the seller was having second thoughts. I can see why he wanted to keep it. This is why GTB ruled the EMs in the seventies. Fast, fun and colorful. Multiple ways to score but a tuned up steep game will challenge you and bring you back for more. Real glad to have found a QD.

Quick Draw is a fairly decent EM. It has a relatively standard layout - ABC top lanes, pop bumpers with standups surrounding them, and some drop targets as you go down on the playfield; the lower playfield is fairly open, with the each side lined by a bank of five drop targets.

The distinguishing factor for this game is the pair of kickout saucers nested about midway up on the playfield, which kick the ball into the trio of pop bumpers. Landing one of these is fairly satisfying - they typically have to be hit indirectly, usually by one of the pops, so it is a combination of relief that the pops didn't send the ball down the drain, a moment of respite as the saucer registers the ball, and the satisfaction of a quick kickout. The "shot" from the saucer is probably the most thematic feature of the game, evoking a quick draw and fire from a pistol. Granted, that "shot" go straight into a pop bumper and straight on to your doom, but it is a satisfying thing to see, nonetheless, and a kinder discharge of the saucer will bring you to the top standups or the top lanes with the right ricochet off the pops.

The saucers talk a good game, but, in the end, they are only one facet of the playfield. They're satisfying and lucrative to hit, but they're also difficult to get to, and they are perhaps the most redeeming factor of the layout. Many games, you do not even hit the saucer, and either have a short, heated argument with the pops, or try to get some good hits on the drop targets. Like any EM, it can be hard to get a handle on the ball at times. It's not a bad game, though; it is, as I stated at the fore, a decent one.

Just purchased this game..she plays fast and the drop targets are fun to shoot at..fairly easy to understand what to hit to achieve a good score. It definitely has that 1 more game effect..I don't see this 1 leaving my collection!

hwyhed edited previous rating on March 06, 2020.
hwyhed has owned this game in the past.

This was my first EM and absolutely loved it. I am a sucker for a good set of drops. At first I focused on drops, but after a week or two I started going for the upper saucers and trying to light A B and C. Fun game to roll score on, if it seems too easy, you haven't pitched it enough and waxed it enough. Fast game with short ball times.

I bought my Quick Draw as a learning project EM, but I ended up really liking the game play. I see why the multiple drop target games, especially the Gottliebs - are usually highly rated - so much to shoot at!

From the two horseshoe kickouts to the 2x 5-drop target banks, Quick Draw is a super fun EM. (Watch out for that AX relay though!). I'll be selling mine soon, but somewhat reluctantly now that I've seen how fun it is. Definitely would add to an EM collection after my fictional SS collection comes to fruition.

Ramtuathal edited previous rating on March 17, 2016.
Ramtuathal has owned this game in the past.

Absolutely love this game. double 5 drop banks with an actual resetting target! Rare gameplay for it age. There's something about playing head to head that's awesome and pushing each other to the next level. 2 ways to play- bold on the bottom or calmly up top. A+ game

nikpinball has owned this game in the past.

As a Gottlieb EM enthusiast through-and-through, I have a special place in my heart for this game. Although the drop-targets can be a bit infuriating, the game overall is lots of fun and keeps you coming back as you try to master it. Classic Gottlieb playfield artwork and back-glass as well. I have several EMs in my collection, but find myself playing this one the most. It's just flat-out a blast to play.

goldenboy232 edited previous rating on February 20, 2016.
goldenboy232 has owned this game in the past.

Quick Draw is a classic game designed by Master K and illustrated by Gordon Morrison. Classic!

The Pros:
Great shots that require careful thought and aim as the geometry of this game is designed to punish shots that wander to the middle of the PF or towards the deceptively greedy outlanes. Getting ABC and having the ball up in the pops dropping into the saucers is where the points are. Gitcher A-B-C lit and collect those 4k indirect shots off the edges of the pops!

The Cons:
This game may take a while to get the feel of it and in many cases successful shots to the drops will send the ball to the oulanes. The 5k drops may be tempting when raised, but they are dangerous shots that should be avoided if possible.

The Takeaway:
A great game that requires more than batting the ball around and getting lucky with your shots . The top of the PF has more to it than one might be led to believe playing the game without really knowing what to do. Spend some time with this game knowing it is pin-time well spent!
6.918/10
8 years ago
904

Classic Gottlieb! Drop targets reset for sharp shooting the 5k horseshoes, safer is to bang away up top and get the kickout holes (after completing A-B-C) A keeper for sure.

stashyboy has owned this game in the past.

While I still don't care for the colors, I really like the art on this machine. It's not my favorite by a long shot but there is a lot to like. It is a fairly simple looking playfield but if set up to be fast it is a ton of fun with lots to shoot for. Unlike some EMs its really always up to your preference as to where to shoot next. Points can be found anywhere if you can get them. The targets are riskier but they pay off, even more so if you've got ABC lit (on 3 ball). It's a mistake to ignore them and just go up top as they are the focus of the game and help you get ABC.
Not my favorite art but a lot of fun to play and I always like an EM without slingshots.

ReallifePin edited previous rating on June 19, 2013.
ReallifePin has this game on the wishlist.

Lots of fun going for the targets. Great rule that pops up horseshoe targets repeatedly once you knock them down for 5K each. Top rollovers and kickouts add to game scoring. Go for double or triple bonus.

dmesserly edited previous rating on January 15, 2014.
dmesserly has owned this game in the past.