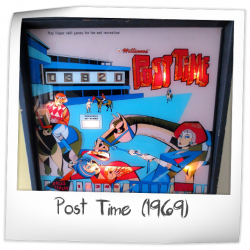 I picked up a Post Time a while back and it was in need of some regular EM rehab. At first I found the rule set a bit confusing, but after playing the game and really enjoying the add-a-ball feature, I found this one a keeper. Even though it is one player, playing against others 1 at a time is just a blast. Its not super easy with the 4 kickers, but I really like how Williams went to the parts bin and installed a flipper in the out hole that "moves" to shoot the ball back into the playfield.

Try it out and see what you think!

After I had a few pins of my own, I picked up a beaten Post Time for my Father-in-Law who is a pin fan as well as a guy who liked to bet the horses. He isn't able to drive to the track anymore so this pin in his townhome is a great piece of entertainment for him.

I had to do substantial cleanup and fixes to the game, and in the end it's a fun player. You basically have 2 goals, light the bumpers to make the center target worth more points, and move the horses around the track. Both scores and races completed can award you extra balls. (Settings can be adjusted to Add a ball, which gives you another ball to the plunger, or Extended play, which kicks the ball out into the playfield after it drains)

I didn't expect much from this game, but it's run to play and a hit with the family. Cab artwork is "meh" (mine was actually worse, had to repaint, but doesn't give any indication of theme), the playfield and backglass feather the "pointy people" of the age, but it's passable. Sounds is Williams bells which aren't as nice as the Gottlieb of the same timeframe.

Fun game, definitely getting a workout by my father-in-law, and enjoyed by everybody.