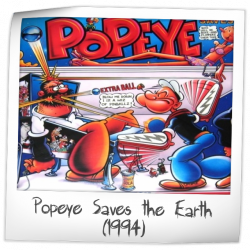 Released under the Bally name, Popeye Saves the Earth was the last of the highly successful WPC DSD Superpin line of games produced by WMS Inc. from 1993 to 1994. It was also was Python Anghelo’s last mass produced pinball machine.

Released in February 1994, and co-designed with Barry Oursler, Popey managed to sell 4,217 units.

Popeye’s theme is primarily based upon the 125 classic Popeye the Sailor animated shorts made between 1933 to 1957 by Fleischer Studios/Paramount Famous Studios, which Python was a huge fan of.

Some machines received a large 3D Bluto head in the center of the playfield, which was replaced with a smaller flat version, due to early complaints. Reproductions and original Bluto heads are highly sought after by owners today. This game has received 154 approved Pinsider ratings and currently has a rating of 7.065 out of 10.

There are 99 rating comments for this game.

247 Pinsiders have this game in their collections.

226 Pinsiders have this game on their wishlist.

63 public locations known where you can play this machine.

We have seen this game for sale in the Pinside Market 120 times. The median asking price is $3,000

There are 462 forum topics linked to this game, 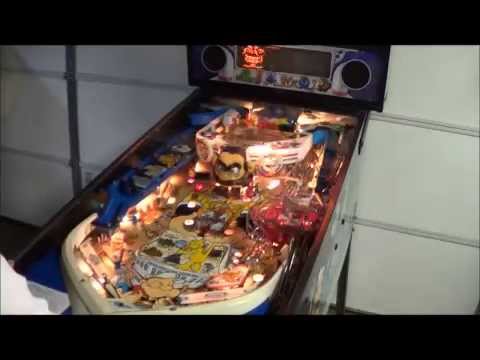