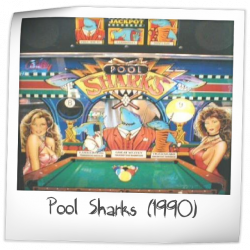 There are 23 ratings (that include a comment) on this game.
Currently showing results page 1 of 1.

very underrated game. shots are smooth and fun. rules are simple but good. and the talking shark on the playfield is a cool feature in my opinion. definitley worth picking on up for the right price!

A weak game from its Era, Pool Sharks is fine enough, though not one I come back to often when I see it in the wild.

Pro’s:
Artwork is decent, though with a flaw that I’ll express later.

At the time, multiple skill shots was unheard of, and is generally a unique feature.

The decor and toys on this game are well done (such as the Shark toy and miniature plastic pool table).

Theme itself is kind of ridiculous and maybe a bit stupid.

In my opinion, there are numerous design flaws (center drops that shoot SDTM, ramps that lead to each other, causing scary feeds, useless and oddly placed captive ball).

I can see how the music can get grating, and there is nothing particularly special about it to make it stand out from other games of this era.

Overall, just a very mediocre game from Bally. A bit disappointing considering Whirlwind and Fun House came out the same year, and games like Dr. Dude and Radical came out from Bally.
6.795/10
7 months ago
SUS

This game is alright, and pretty forgettable. I have a bit of a soft spot for it because it was one of the main games the got me into pinball when an Airbnb my family rented had one in their home arcade. I played it non stop and had a blast. Looking at it after years playing has made me realize it’s not that great but I still like it for the price and the nostalgia I have.

Grayont has this game on the wishlist.

An okay shooter. 9-ball requires you to shoot drop targets in a specific order which I appreciate. It's a perfectly fine game to drop a couple bucks in, but there's not much there to keep you coming back.

roffels has owned this game in the past.

Pjitegior edited previous rating on April 03, 2021.
Pjitegior has this game on the wishlist.

Picking 8 or 9 ball at the start is not bad, but it is pretty much downhill from there. Its pretty easy, too easy, and the art package is nothing to look at.

Admittedly, I found this game a bit boring when playing it. It's got some cool shots, but the overall experience didn't grab me and make me want to keep playing (though I did, so I could develop a fair impression of the game).
7.211/10
3 years ago
D B

I like this game, fairly simple but some good shots. You can play 8 ball or 9 ball options. While the ball is in the shooter lane, if you press the right and left flipper real fast one right after the other the shark will speak to you.

I don't think Pool Sharks is a great pin. I don't even think its a good pin, but its a decent and fun enough one. The only way I'd want it in my collection would be if I had space for like 100 pins. The backglass I think is the best thing about the game. But, even then its a hodge podge mix, the ladies are drawn beautifully and the shark a bit cartoony and doesn't fit the same style and is a bit jarring to me seeing him there. But, its good fun cheese. There is not a lot of art on the playfield, and that is done in a cartoony style. Art on cabinet is passable, but nothing really fancy. Not boring, just enough art to make a nice side cab art.
What I do like about the game is the space in it. The playfield is wide open and lets you focus on your shots. I like this aspect a lot. It does let you choose between 8 and 9 ball, but I mostly just choose 8 ball play. So not sure how different the game is. There are no real toys, the only toy I can think of is the shark that talks on the playfield, but he looks a bit cheap to me. And really isn't a great gimmick. But, its a fun pin to shoot around with for a little bit. As I said I like the fact that it seems to be more wide open than most pins and gives you room to hit your shots. I do wish the trick shot timers and jackpot timers were a little longer. Because, sometimes you need time to get the ball back under control so you can attempt to make the shot. And sometimes when you get control timer is gone. I know play better. I think its a fun enough game, just not great, but not every game can be great.
7.109/10
7 years ago
GCH

Great sleeper of a pin. Never played this back in the day, but recently had a chance to put some time on one. Nice risk/reward shots, cheesy 90's theme/art/quotes and great lightshow. You won't miss the lack of multiball - in fact it's a nice departure from the wash, rinse, repeat found in alot of 90's pins.
7.684/10
8 years ago
SJD

Overall the game play / shot selection is fun, but I can see how the cheesy music and shark voice limits the appeal. They have grown on me though. The cartoon shark is a very odd contrast to the voluptuous ladies on the backglass. The plunge shot options are good and trick shot is very good in that it decreases in value over time (a hurry up), which is a cool feature. There is a timed jackpot as well and the extra ball is cool - first you have to get it lit and then you use your flippers to move it across the inlanes / outlanes to get the award. The lighting effects are good. All in all a fun game, very good bang for your buck as long as you can live without multiball.

Widen the outlanes, make the slings nice and sensitive, make it a bit steeper and it's a fairly challenging game

Cons: no multiball, semi-shallow rule set, music may not appeal to all

This is definitely a great starter pin, or fun family pin. Anyone could step up to it and do well. Not overly in depth but it does have that play me again factor.

wildinindiana has owned this game in the past.

This game is underrated. I will admit that a lot of the appeal of this game to me is that it is easy to play. They hand out free games pretty easily and beating the game is actually possible for me to do, unlike many other pinball games.
6.975/10
9 years ago
???

I think this game is very underrated!

This is a great little game. I like the tall head backbox, the real backglass and the theme, I love pool themed pins. They go together like peanut butter and jam

No multi-ball, but that is okay! There are plenty of other pins with multi-ball, and if you treat it like a game of pool, think of the lone ball like a cue ball ;)
I love the captive ball shot. It's very satisfying and can pay off very nicely
The diverter ramps add a nice back and forth action, and the Jackpot with talking shark head always adds a bit of suspense. The left lane to the eject hole to collect rewards is fun to shoot, and there is also a skill shot.
Drop targets are snappy, and the three pop bumper design with top lane rollover, really adds a classic feel to this pin.

Overall, it's a nice little game. While it's not a rulefest like games to come a few years later, it's classic layout is fun, and that's what makes it stand the test of time. I always enjoy playing a nice game of pool sharks!

shacklersrevenge has owned this game in the past.

Pool Sharks is one of those Bally games that has a cool layout... and that's about it.

The Pros:
Good variety of shots and ways to get around the table. Choosing between 8 and 9 ball at the start of the game is a way to keep things interesting. Just know which one to choose first. Psssst.... 9 ball.

The Takeaway:
A good game for a casual player. Serious players need to look elsewhere.
6.290/10
9 years ago
ERC

Like others have said, this game gets an undeserved bad press.
The lack of multiball is a killer for casual players and it does feel a bit like a link game between old style games and new, but I like it and once you have the rules sorted in your head it can be a very enjoyable play with quite a lot of strategy.

I was having either super quick drains or really long play times. A lot going on. Feels ancient for the time. Plastic everywhere. Play field is a little crowded. Not a one game collection pinball.

That being said, good flow. Nice use of ramps that you can hit or not without disrupting the overall flow. Just not that rewarding. Better art would help.
7.482/10
10 years ago
DEY

I like how the ramps can feed together from the center out to each side
7.544/10
10 years ago
XOT

I don't know why this game gets such a bad press. It's actually not a bad game to play, with some good shots to be made. Maybe it comes across as a bit cheesy with that bland "casino" type music playing constantly. The silvered backglass with the sharks and the girls on is cool. I'm not too keen on that talking shark head though. A cheap and cheerful pin that can be picked up at a bargain price.

1
There are 23 ratings (that include a comment) on this game. Currently showing results page 1 of 1.