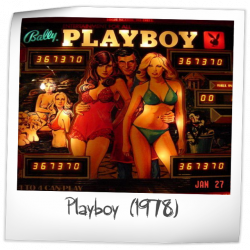 There are 53 ratings (that include a comment) on this game.
Currently showing results page 1 of 3.

This is a classic pin, played as a kid at the local Tastee Freeze and have it in my collection now. Very iconic and fun to play but as an early SS, not much to the sound. It you owned one early Bally SS Pin, this is a good one. It won't compare playwise to a modern day pin, but it still makes me smile while playing it.
8.266/10
9 months ago
PO

Simple game play, but fun to play and easy for beginners to pick up. Nice playfield layout for a 1978 machine - I remember playing it when it came out, and enjoy it just as much today.

pat4race edited previous rating on January 26, 2021.
pat4race has this game on the wishlist.

This pin should be top 100 on artwork alone. Has to be one of the best looking old school pins out there. I had mine brought back to life by a couple of fellow Pinsiders and man does it look and play amazing. I mean it’s obviously classic game play not like the ultra fast play of the newer pins but that’s why I have it. 1978 pinball at its finest. Do yourself a favor and add softlight pink LED’s to the playfield. Really makes it pop. I love the old school feel and sound of it. The grotto shot when it’s all full is an awesome feeling especially hitting it around the right orbit. Gameplay is a bit lackadaisical but if you don’t hit your shots correctly and think ahead for your next shot those outlanes are drain monsters even with the posts moved all the way back. All in all just owning this pin to look at and admire is worth the price of admission but the classic gameplay keeps me coming back time and time again.

Flash71 has owned this game in the past.

Playboy! Used to be iconic and the "dirty" secret of arcades! (Hey guys, I played a Playboy!) Now seems so tame...

Good Solid State game and lots of them around. Some like the Pink/Magenta cabinet, not sure myself but it does fit the theme. Iconic again.

I enjoy the Backglass more than the playfield (girls are beautiful on pf, don't get me wrong). More references to the magazine contents in the backglass like Easter Eggs.

This game was like a pinball version of the magazine... without the centerfold or the great articles! The backglass sucks you in (Patti McGuire was my favorite playmate) but the game is only average for an early "classic" SS game. It's fun for a while but doesn't grab you and keep you wanting to play again! The theme might be somewhat "adult" for young children (Mom, what's the "grotto?") But the play is middle of the road classic Bally. The main thing this machine has going for it is nostalgia.
5.486/10
2 years ago
MLP

It's all about the nostalgia. It looks great in a collection and I know some people idolize this machine...but it's dated. It's a simple game and easy to learn. The issue is that shots are almost too easy to make and you can beat the machine if you're good at nudging and know how to aim. Even a novice can put this game away. The playfield is tacky, off-setting the sweet backglass and the audio is an absolute crapfest with the same dings and "song" you get to hear every five seconds if you can get into the little left Grotto area. It's a decent game but nothing more than a passing play for me.
7.667/10
2 years ago
MJR

This is always a fun game to walk up to and play a few games. Doesn't hold a candle to today's games but I've played it a ton during my drinking years at the pub! The artwork was great for it's time.
6.978/10
2 years ago
PRI

I love the sounds this machine makes. It almost makes up for how average the game is. The backboard also does its job well, with the big nosed ol lady hidden within the scene. The chimes and whistles are the driving factor of making this long lasting for me.

Yet, i don't recommend it if you are looking for a game with something new or outstanding. It's nothing special in play. It's easy to get bored of unless your fighting for a highscore.
7.346/10
2 years ago
LWR

My father had this machine in his garage when I was growing up. Played it for many years. It's what got me into pinball in the first place. There's a lot of nostalgia here, so I may not be fully objective about my review, but whatever.

The artwork is excellent - especially for the era. It really is a pretty machine, if it's in good shape. It makes a helluva show piece, done right. The little Playboy tune that plays when you start a game (or hit the grotto) is unique for the era as well. Gameplay... well, it's a late 70s SS machine, and it plays like one. You have some drop targets, some standups, the right loop, the extra ball shot, the pops, and the grotto - and that's really about it. But that was normal for the time. It's one of the better machines of its era. The theme is well executed and it doesn't look horribly dated like a lot of other machines of its time. I don't know why, but it really stands the test of time in terms of appearance.

I don't know that I'd ever own one again, but I know if I saw one somewhere (unlikely, now), I'd want to play it at least once. If you're into old SS machines, this is a great one to get.

djxealot has owned this game in the past.

A fun game I played back in the day on location. For an early Bally SS game it's more challenging than other pins of the late 70's. Artwork is excellent, a trend setter in it's time.

tomdrum has owned this game in the past.

great early game. it was one of the most played in bars when I was growing up. fairly easy game and not a lot to do but this was one of the games along with EBD. this game is part of the history of pinball

Good game. Many ratings relate to nostalgia I believe.

chris_silver has owned this game in the past.

One of the classic Bally games from the 1970's that plays great today as it did in the 70's.

It is a looker with the two Playboy Bunnies and all of the pink.

I had mine set up steep and it played OK. But there is not really much to do. One drop target assembly with five targets that is hard to access to make a hit. And five standup targets to shoot for. And an Extra Ball shot.

I enjoyed mine while I had it. Sold it. And I don't miss it. But it sure was pretty.

cottonm4 has owned this game in the past.

I think of Playboy when I think of classic Bally games from the early solid state era: easy to learn, straight-forward goals, flashy artwork and a fantastic licenced theme. The art package on the game is easily in the top five of the era, with the edgy Bally artwork blowing away the cartoon corny-ness of the Gottlieb art packages of the same time. The pink and black that dominates the palate are presented in a visually pleasing way. I'm sure this theme would have drawn one or two adolescent boys to it back in the day, but is very tame by today's standards. The right orbit grotto shot through the pop bumpers feels so good when you make it, and not many shots like that exist in pinball from this era (that don't involve a spinner). Playboy comes out near the top of the heap for games released in the late-70s and early-80s.
8.884/10
4 years ago
TOM

I think the game play matches the theme really well.
Its fun to roll over the score on this one!

Classic early solid state Bally, 10x better than the terrible Stern release in the early 00's. Artwork is tasteful but also the game is enjoyable.
7.178/10
6 years ago
RDM

I had a chance to play this at a local pinball shop. I think it needs a bit of cleaning and a good wax, but having never played it before, I was kind of disappointed that it played so slowly. Maybe it was set less than 5 degrees. Either way, I had a pretty good game on it and made my first ball last a VERY long time and when my after drain bonus kicked in and the melody played for a great long while, even the owner of the place walked by and said 'Wow, nice bonus!'. Of course, the next two balls drained pretty quickly, but I still scored close to 800k points and won three credits during game play and took High Score to date! While it wasn't a super fun game, I thought it was cool overall and I grew up looking at my dad's Playboy's from the era, so the theme was perfect to me. If I found one cheap, I might pick one up for my collection.
8.988/10
6 years ago
???

When You Don't Have The Bunnys Linked This Game Can be Quite Chalenging For An Older Game And If She Is Waxed Up Right WOW EL Zoomo !!

Finally got the opportunity to play this classic machine at the Pinball Expo Sydney Nov 2014. It certainly looks the part and captures the cult of the era. Backglass & playfield are well synchronised & serve the theme-hot women. Now if only the gameplay matched the theme we would have a winner. Whilst the machine I plaued lacked tuning there are limited shots and drains are plentiful. Not a keeper.
Next123
There are 53 ratings (that include a comment) on this game. Currently showing results page 1 of 3.