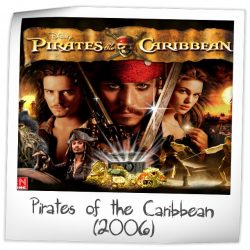 There are 299 ratings (that include a comment) on this game.
Currently showing results page 5 of 12.

Bought this game a month ago, nice looking game. First thing I took the huge hideous clear plastic shield off, the ship looks much better without it.
The ship is one of pinball's greatest toys, but it's a little too easy to hit.
It's a very stop and go game, the Tortuga spinning thing really slows the game down.
Completing the compass for 4 winds multiball I have yet to do but it does seem do-able, not sure I will accomplish this before I get bored of the game though!
The pirates theme is well done, but links to the films are tenuous. With such huge licence potential, it's a shame that most of the callouts are done by a Johnny Depp soundalike (although he is pretty good!), but where are all the other characters?
Overall a good game, fun for novices and challenging for pros. Could've been a lot better though, seems like a bit of a missed opportunity.

mark9 edited previous rating on January 04, 2016.
mark9 has owned this game in the past.

Just a very nice family pin that everybody here wants to play!!
No top 10 pin but underrated for sure...i think top 25.

The tortuga spinner gets a little old after a while and overall the game seems a little on the easy side but still a very fun game! Clear goals set out, and the sinking ship is sweet!
7.023/10
6 years ago
ZAL

POTC i actually quite enjoyed it, but it does have that grab and go feel to it. Make a shot, wait, make a shot, wait. etc. I believe this game is very friendly for newcomers. First game on it hit high score at local arcade.
7.566/10
6 years ago
WOZ

I owned a POTC for about 6 months and had a blast playing it. Visually the game is one of Stern's best looking games to date with striking colors and great artwork. Toys wise the game has one of the best in pinball with that being the pirate ship which is very interactive. A lot of modern pinball toys are no where near as interactive as the ship in POTC and I would put it on the same level as the castle in MM.

Rules: Straight forward but too many modes that are only unlocked after you hit the same shot over and over again and once unlocked repeat. The rules for POTC needed a story based ruleset similar to LOTR where you have a set number of shots to hit on the playfield while DMD animations show scenes from the films. The game does have a wizard mode but reaching it requires you hitting one area over and over again with no unique rules to be seen. Rules for the different ship levels are to simply hit the next level ship "X" more number of times rather then making the player hit a set amount of shots.

Audio: I really like the audio and sound affects in this game. The Johnny Depp sound-a-like is spot on so no worries there. The game does lack voice jackpot call outs which does slightly hurt the games sound package. Overall though the audio is pretty slick and the game end audio track is a fun to year.

Gameplay: The game doesn't have much flow at all with the only bit coming from the "Jack The Monkey" shot. However, I do find the shots to the ship to be satisfying and it's really cool to see a hidden shot unlocked when the ships are sunk.

this machine would be better if the ball would stop heading for the outline as soon as you launch the ball. good machine if you look past this.
7.904/10
6 years ago
POP

Played this game at a friend's house and absolutely fell in love with the game. I just had to get it and can't stop playing it. It flows, has multiple shots. Theme is awesome. I love it and absolutely recommend it to anyone planning on putting it in their collection.

SuperPinball edited previous rating on August 11, 2021.
SuperPinball has owned this game in the past.

For me there is something about this game that I just GET. I am not a huge fan of the theme ( I like the movies just isn't on my list of pins that need made) but I like how they integrated it. The sinking ship is really cool and for me the game objectives are pretty easy to follow. I know for some people the game isn't deep enough but it's good for where I am at. Things are well spelled out, clear objectives, and a lot of fun.
8.440/10
6 years ago
YPS

i'm a big fan of Pirates, think it deserves more love as one of Stern's top 5 games (with LOTR, TSPP, SM and Sopranos). The machine is visually stunning with such a wonderful theme to work with, and all those blues and golden yellows from sea, sun and sand .... plus treasure, the Kraken, the Jolly Roger and old octopus-head Geoffrey Rush being spiteful and deliberate. bring it on!

i think Martin Ayub's review in Pinball News was pretty spot on about the gloriously haunting music and the terrific fun factor on offer here. there are plenty of shots to aim at, and three playfield toys - a chest, a spinning disc, and of course a spectacular rocking pirate ship that can actually be sunk below the playfield. the game has a nice clear easily-understood but at the same time deepish ruleset, where you just have to complete all the points of the compass, with a few easy ones and a few dastardly ones to offset these, all culminating in a Wizard Mode that feels satisfying.

some people bemoan the lack of lots of Johnny Depp soundbites as Captain Jack Sparrow, but i reckon that if there had been some, they probably woulda got repetitive unless they built in about 100 random quotes and noises. and you never know, some clever person may even create a new sound ROM with some in it one day. it would certainly sell well.

anyway, overall i think POTC is a fine package. it will be in my collection for a lot longer than many other more popular titles, that's for sure.

Actually not a bad game for a Stern, I like it about as much as LOTR, they seem similarly appealing to me.

A fun game with a couple of cool gimmicks. I was never a fan of the movies, but the theming seems to work well. It's oddly satisfying to sink the ship.
7.664/10
6 years ago
BJW

Pretty fun pin. Did not have great long lasting appeal for me. Some ok shots but just did not do it for me.
5.851/10
6 years ago
SAP

The toys on this deck are super cool! A sinking ship (could this be a $3500 MM?!)! Lots of cool looking shots! Family friendly! A great franchise! And yet...the game plays like a beat up EM. It's SLOOOOOOOOWWWW...and not the kind of slow that you'd expect from a pin that hasn't been setup properly. Add to that the constant stop-and-go non-action of the animations and ship moving, and you've got one boring game. This game seriously reminds me of the early Sega CD/GameCube games where the designers were like, "now that we have the technology to do long cut scenes, let's make a movie with a few pieces of an actual game.

Onto the audio: the movie had one of the most amazing soundtracks! And yet...the song Stern chose to use as the main theme is that?!! It's slow, boring, and happy. Where's the adventure theme?! The call-outs are decent. We all know it's not Depp, but at least they got someone who can sound like him (unlike TWD where they didn't even attempt--why put the characters on the side of the game then?!).

I'm writing this review to remind myself 6 months from now when I see one on Craigslist and start wondering if it would be fun: don't buy it.
8.032/10
6 years ago
JRW

Fun game but seems repetitive a little. Fun game for the family if you are a fan of the movies.

A decent pinball but overall nothing too special. A few good shots, a few good toys on the PF, decent game flow and a relatively long play time are the notable features of this game. Putting a picture of Johnny Depp as Pirate on the back-glass is not much in terms of artwork. The overall looks are OK but again nothing special. It doesn't have any particular weaknesses but nothing really stands out either.
8.980/10
6 years ago
SGG

glauses has owned this game in the past.

Pretty fun game, but sometimes just lasts too long. Really like the Ship and spinning disc toys.
9.660/10
6 years ago
AJB

Totally fun game with excellent challenge for the whole family -> there is strategy / gamesmanship for the advanced player but still a whole lot of fun for a novice sinking the ship. Overall, a great pin for anyone's collection but especially in a home with kids...

Nice fun game. Not to deep that you can't get into right away but deep enough to stay playing. I really like this game..

This one was good, but I didn't like all the plastic on the upper left of the playfield. The folding ghost ship is cool.
9.660/10
7 years ago
CJF

Pirates is a game that is stacked with great mechanical toys including the famous sinking ghost ship. The effects, sounds voices and game play are amazing to match this great movie franchise. One of my favorite pinballs of all time.

I prefer this to my SM which will definitely put me in the minority. The main thing which lets this pin down is the fake actors dialogue. Besides that it's an excellent pin.

jsyjay has this game on the wishlist.

Pirates is great. It is my favorite. Should be easily in top 20. Much better than scared stiff or others unnamed. The play stars fairly easy but then becomes increasingly more difficult. Some say is too repetitive--- all pinball machines become repetitive. The-only improvement would be the call outs. They should have spent the money for lines from the movies. Johnny Depp lines from the movie are perfect for the game. Also other actors had great lines. E.g. Capt Barbossa says"you don't believe in ghost stories miss Swan-- we'll you're in one". That would have been great!!!

I waited to rate this one to see how I felt after the honeymoon. I still love it. Definitely has to be mentioned in the conversation for one of the top 3 pins stern put out. IMO. There is a big difference if you play this game and the toys are not working properly. This is the case with most routed ones, especially the ship. When this game is working 100% it AWESOME. Keeper.

McPin54 has owned this game in the past.