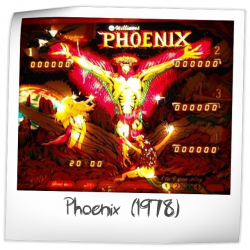 Phoenix is one under appreciated Williams title. The game is fun with a spinner, 5 in lanes, 10 drop targets. This Makes it a great game because you have to use the entire play field. It is also very well-balanced but hard as heck. A Crazy pink collar on the cabinet and a man like Phoenix on the back glass make it very memorable and very appropriate for the era of pinball. Love this game

This game is a bit of a filler game in a collection imo. you would get bored of it if it was your only game in your collection. good for tournament play. cool backglass. not much to shoot for though

The artwork is one of a kind. Rules are very straight forward. Great playable and approachable machine. Don’t let the birdman scare you away from playing this 70's classic. Great bang for the buck.
7.515/10
4 years ago
904

When in nice condition this game has a unique flow and bounce of shots. The 2 targets in the middle are nice. The target at the end of the left side lane with wire posts. Right spinner is kinda challenging.
6.431/10
5 years ago
NEK

It is important to setup this game correctly. If done so, it's fast, fun and challenging. The outlanes, in typical BO style, have no rubbers and are a pain to work with. Keep the lower playfield waxed and the slings sensitive and you'll be fighting to regain control.

Folks dis this game for being simple, but I find the rules and layout to be very good. Here's why: many of the more popular games for that era are mainly one shot games. While not the most interesting layout, the scoring rules are quite balanced and entice you to shoot for all the shots. This game has a 1000 point spinner when lit, so does Grand Prix and Hot Tip and Magic, etc all popular games - guess which games it's right to shoot nothing but the spinner? Not Phoenix.

For high scoring you have to lite roll overs 1-5 which will advance the Phoenix shot, the more you do so, the more you advance it's value. Once you get some bonus built up you need to complete drop target banks to increase your multipliers. These shots will put the ball in trouble, but you need to shoot for them. Also, the A and B targets in the center of the playfield are worth 10K a pop and increase your bonus, which is a fairly large award but also put the ball out of control. The Phoenix will also take away features, usually the lit spinner. Shooting the spinner all game would not be a way to tourney results. Once you drop the center drop targets they can only be raised by the inlane switches (Shatz it?) or the 2 and 4 rollover. Keeping those drops up so you always have a lucrative shot is important. If you can manage a long ball, you'll have the Phoenix shot up to 40K and will take that as much as you can, but when the ball comes back to you it's coming Stdm sometimes.

This is a well balanced shooter that makes this a lasting game IMO. It would be great for tourney play - not sure why PAPA doesn't have one!

Phoenix is the first design that came from the over-productive and underrated Barry Oursler.

The Pros:
In many ways, this deck epitomizes the later 70's awesomeness that defined the way that Williams games felt and played. This game is fast! 5 lanes at the top of the PF with no lane change. How are those nudging skills? 2 sets of 4 banks of drops means that your aim must be on point. The target lane has to be hit solidly to register all the way to the top and the spinner is incredibly satisfying to rip. The center targets are death (as we see again in Barracora), but if you look closely you will see a (proto) fan layout! The Oursler (tm) outlanes are in full effect as any shot that is missed, you will feel the pain for it.

The Cons:
Constantino Mitchell, how did you EVER get to put artwork on a pinball game? The worst part of this game is the art package. That birdman looks like he has a horrible perm and while the colors are vibrant, they are all over the palette and are rather confusing. You thought Flash was bad?!? This game is prime for a retheming after a good beltsanding and creation of a BG/plastics. Any ideas?

The Takeaway:
If you can find one on the cheap, do it! This game is a true player that offers the player a table that will challenge their skill and accuracy. One play tip for the game is to leave the upper left drop target for last so that the ball will not head SDTM once the bullseye target is hit. This is not the deepest game from the time. Get the bullseye lane up there and keep hitting it. That's about it. But to do that, you need at least a few rounds of drop targets down. Consider this as compared to 6 standups and ripping the spinner ad infinitum, this game makes firepower (which came out over a year later) look like a piece of cake. Yes, multiball is fun, but points is points and when you gotta strategize and work for it. I have to appreciate it. While the rules aren't as good as games to come even a few years later... this game is straightforward pinball awesomeness in it's pure and un-refined form.

Phoenix was one of my favorites when it came out back in late 70's. It was one of the first solid state machines to join the long rows of EMs at the local Aladdin's Castle. I found it ugly as mud yet very challenging. Drop target city. I ended up buying one years later and still own it. My rating may not reflect the true essence of this pin but in all honesty there is nothing spectacular about it. Just a decent-playing early SS that happens to be a good bang for the buck pin.
7.257/10
5 years ago
???

Phoenix was the first machine I've ever owned so I figured it should be my first rating as well. A lot of people knock this game because of the artwork and pink cabinet but I actually thought it was really cool. Gameplay was good as well, 10 drop targets and 5 numbers at the top rollovers that could be lit in multiple ways play heavily into strategy, no lane change here! Sounds weren't bad but if you're looking for a laugh switch it over to simulated EM sound mode.

Bottom line I miss playing this game a lot more than I thought I would. Couple that with the incredibly low cost and if I had more room I never would have sold it.

skywelker has owned this game in the past.

This is the most affordable, and least desirable game I've owned. Yet, I end up playing it more consistently than any other game I've owned, other than Skateball. The outlanes are asskickers. Getting P-H-O-E-N-I-X all lit is a real feat. The drop targets and symmetrical layout really work on Phoenix. The machine has been easy to work on.

iron00monkey edited previous rating on November 17, 2014.
iron00monkey has owned this game in the past.

A nice pin from the "hippy," pin era. I restored one of these and it was a decent machine to play with a few nice shots. But the cabinet with that putrid pink color...could not stay in the collection.

twominds has owned this game in the past.

Nice flow and needs some nudging to stop it draining the sides, the sounds are pretty ordinary but that's how I remember them and it was okay in '78 and still is for me. I'm not a fan of the 'Mitchell's' artwork on the backglass but the playfield and cabinet are okay. I like the drop targets and the bullseye alley. Wish it had a 7 digit display so it would register the high score ...the only way around this is to get in the 900,000's and sacrifice the ball and hope the bonuses don't take you past a million which is back to zero!
8.206/10
7 years ago
BJC

One of the early SS games, which offered both emulated EM sounds (awful) and electronic sounds. Sounds are decent. Playfield layout is simple but fun, a bit brutal and unforgiving at times. Rules are simple and fun. Artwork is pretty cool, plastics look great with colored LEDs. I find it to be addicting, and I'm constantly trying for better scores. Some games go great, some go horrible. Only bummer for me is that the outlanes are punishing. Otherwise, pretty fun and underrated game.

madsci has owned this game in the past.