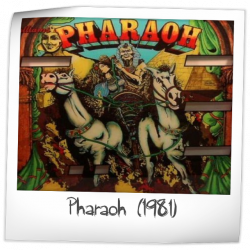 I had fun playing it. Its from 1981 and plays better than most games from that era.

The artwork is great! The gameplay is fun but very different...so it would go well in a lot of collections. I think it is underrated.

The game is very under rated. Gameplay in upper playfield is best I have ever experienced. Access to upperplayfeild is unique with three options to drive ball up. Best integration design of upper/lower I have played. It is llike two games on one table.

Of the early 80's split playfield games, this is my favorite. I am a huge fan of the theme and the artwork is amazing. Although it's not very deep, there are certain shots that are real rewarding and create a challenge that keeps me coming back. The two level playfield creates a fast game and can be unforgiving.

drypaint has owned this game in the past.

I really loved Pharaoh! It stayed in my collection for quite a while and I played it a ton.
I didn't really want to sell it, but I had more pins coming in than going out; so...

The artwork on this game is really good. I always found it fun to point out the suggestive stuff in the backglass.
The gameplay rocked! It is a upper playfield heavy game, but the shots to get up there are satisfying. It's critical that the upper drops work correctly, or the game isn't worth playing.
Getting multi-ball gets easier over time, but keeping it alive and up is a challenge. I think the most satisfying is getting the extra ball. The target light to hit moves back and forth from upper and lower, so timing and accuracy is key.
I miss having it around.... But, some pinsider in IL is happy playing it now.

Great game for the early 80's. Love the 2 playfields. Magna save is cool.
Artwork on playfield and back glass is great

pinball77 has owned this game in the past.

I played a modified version of Pharaoh at Zapcon 4 (2016) that was set up with no legs and odd controls. Still, it was fun and of the four Williams in the series, I like Pharaoh the best (then Solar Fire, then BK, then Jungle Lord, if you're curious).

The raised playfield is fun, but almost takes up too much space on this particular table. It's neat to watch the ball go off and explore on its own (where you can't see it), but I really need a little more room to shoot. Besides the cramped feel, I also think the raised pf shots are too hard or lack the capacity to allow the player to make a variety of shots. Still, the theme is great, the art is very detailed and eye-catching, and the overall game play is still fun.

I'd like to own a Pharaoh one day, so it's on my list. I recommend playing it several times with special attention to getting that raised pf shot to go through (you'll know the one when you play it).

Ramtuathal edited previous rating on June 11, 2016.
Ramtuathal has this game on the wishlist.

Fun game, with great art. The shots have a good curve of difficulty. Good sound for its age as well. Rules are a little strange though.

charliebrown2417 has this game on the wishlist.

One of my favorites. Love the color schemeing. And the design of pharaoh himself. I don't care for split level games but this one gets a free pass on that.
4.422/10
7 years ago
ZUL

Some people really love Pharaoh. My opinion is out of the fabulous 4, this is the weakest of the brothers.

The Pros:
An interesting PF design. Artwork that will keep you looking at the game for months and still finding new and interesting things in it. 3 sets of targets, a trapped ball and 2 lanes on the top. Lots to do! Shots from the kicker on the left are timed. Magna saves are always sweet.

The Cons:
The game turns into a trap/backhand game with the shot to the upper p/f from the lower left flipper being your moneymaker. Lower PF is a non-factor. Play is, well, it's boring.

The Takeaway:
I'm happy to get a real tour from someone who knows this game in and out... but I'm just not getting a good feeling from this deck and the more I play this game, the less I like it. Not a good sign at all. Out of the Fab 4, this is the runt of the litter by a longshot. Jungle Lord has new respect in my eyes, even with the random bagatelle. BK is a great game, and Solar Fire is the best playing of these 4 tables.

Update:
There are some interesting strategies on the upper PF, but the lower PF is not where you want to be. Trap, post pass (if ya gotta) and put the ball in the hidden tomb for the safe shot and feed to the left flipper on the upper PF. This game may be a candidate for a few PF mods:

1) Small flippers on both sides of the upper PF.
2) A rubber band across the entrance of the Hidden tomb.

This may make this game more challenging. Or it may make it just downright un-playable. I'm curious to know if someone is willing to do this to their deck. Any willing test subjects out there?

Good looking machine with rather limited ruleset. Somewhat unbalanced layout, as the purpose of the lower - and very narrow - playfield is limited to rack up MagnaSave(tm) units. For the main feature you need to keep the ball on the upper playfield, multiball is a rather "useless" - playfield scores double - and the memorizing capabilities of the SS technology are completely wasted, as no achievement/value is held over to the next ball. The only "pros" beside the great artwork are the MagnaSave(tm) feature and the Bonus-Ball feature for two or more player games, IMHO.
6.683/10
9 years ago
EMO

I always play this game when I see it. The fact that it has a small lower play-field makes it tough for a novice. It looks great but it seems pretty shallow to me.
1
There are 13 ratings (that include a comment) on this game. Currently showing results page 1 of 1.