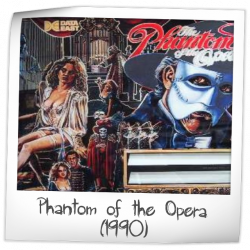 There are 56 ratings (that include a comment) on this game.
Currently showing results page 1 of 3.

Best artwork in a pinball machine ever!!! The phantom and the opera singer looks amazing! the music and the voice acting are beautiful, the theme is so amazing (gothic styled as the original novel from 1911). The only bad thing is that it may be unfair sometimes, and the ball drains too much from the out lanes, also the spot between the flippers is way too big. This table rewards the aim a lot, so you gotta be very good at the left ramp to achieve a big score. I made 24 million points thanks to the double score feature (you have 1 chance to make a double score during the whole game). Phantom millions are also a great aid to score many points. This table is not for begginers tho, but the artwork is so attractive that it's worth replaying... a lot.
Did I mentioned HOW GOOD THAT ORGAN SOUNDS???? WOW

When I think Classic pinball, this is the game that comes to mind!!! Afters years of only ever seeing this game in pitchers, I finally got to play one and WOW! This is one of DE best games! Rules are simple but do let that stop you from playing it. The theming/music on this game is par to none and will suck you right into the games gothic theming.

nexfx has this game on the wishlist.

Definitely one of the best looking machines of all time with great artwork by Paul Farris. Good stereo sound and fun to play with friends and family.

Owned it, sold it, regret it..... I sold it due to lack of space....and now miss it. Theme, music, speech, artwork are fantastic and this takes you into the game. OK it is not super deep in rules but the shots are nice. Great ramp and “organ” shot. You keep playing it and it is a fantastic pin to play with a mix of beginners and pros. One of the most underrated pins in my opinion. Baby come back home!

Malibro has owned this game in the past.

This game kicks my butt everytime. Super challenging and fast. This game can be discouraging at times, but it makes you try harder d keeps you coming back. The magic mirror feature is so fun, but be ready for it when the ball pops out.

bicyclenut has owned this game in the past.

A good game for beginners. Playfield layout is pretty boring although the organ is cool. Just shoot the organ and ramp all day. Excellent art and music though.
8.695/10
1 year ago
???

The most beautiful pinball machine ever, hands down. Unfortunately, it's a very tough table with which I always struggle to put up a good score (or satisfyingly lengthy playtime). But boy, oh, boy are the sights and sounds amazing!
8.318/10
2 years ago
???

Fun game that is easy to just pick up. The music and organ multiball makes this game, but it’s very repetitive. Only good for one to two plays at a time.

I I really like phantom I think it has some of the best art, sounds and music.what hurts phantom is the rules are not the best.

The best sounding game around and quite a looker. Game play is simple but does not get old.

zahner edited previous rating on April 15, 2019.
zahner has owned this game in the past.

"2 ball play ready" --- "Ready for 3 ball play" (something like that). Phantom of the Opera is a challenging table that requires quite a few progressive shots to be made to start a 3-ball multiball, and even more difficult to get the jackpots. However, even with a punishing, brutal design, once the multiballs have been made, there are too few other shots to keep the player engaged. After overcoming the initial challenges of getting the organ shots timed right, the rest of the game fizzles and gets lame.

A Data East game with an incredible Paul Faris artwork package for the playfield and backglass, and an average gameplay design and ruleset.
Most owners have the game for exactly these reasons, and no other.
DE screwed up and really wasted the great potential of this game.
Sound quality for music and callouts is above average for most DE games.
The game is completely missing the original true musical orchestration, that would have greatly improved the game experience.
The organ takes up so much space on the right corner of the playfield it completely dominates the entire game.
The single ramp seems almost like an afterthought, similar to the repetitive ramp in Star Wars.
It just does not seem to provide the game with more comparable flow.
The "Magic Mirror" (trapdoor subway scoop) is the other main feature which controls the game speed.

It commands a higher price than it is truly worth, but if you a POTO opera fan this game is a must.
I have only seen ONE NOS playfield in nearly 30 years since 1990.
I have only seen FIVE NOS backglasses in the same period, although I am sure there still a few out there.
Many of these games did not survive past the late 90s into the early 00s.

If you do find a HUO game, buy it immediately, if not, skip it because it probably will not be worth your time to fix or own, as the theme is not conducive to most family collections and has little game depth.

This game could have been great, but it feels like some things are missing. Maybe if it were 1994 and it had a DMD it could have been deeper. Beautiful art, fun at first, but gets boring. The "oh no" after a drain gets old fast. Ok game, love the art.
7.815/10
4 years ago
QNT

POTO has some of the best all-around artwork on any machine.
Playfield could use one or two more things to shoot at but what is there is fun (Magic Mirror!) and is nicely lit.
Callouts, sounds and the music are good but the screechy sound quality grates on me after a while. (especially the drain scream)
Overall it’s a great pin for 1990.
9.200/10
5 years ago
RLP

A really fun game of it's time. Not a ton of shots, but the ones that are there are really fun and the flow is great. I'm a huge fan of scary pins so this of course is a win-win for me and I truly feel it would fit my haunted house pinball arcade quite nicely, and yours as well ;). I'd almost say get it just for the art and music alone, but trust me... the gameplay is just as solid. Don't expect any sort of Wizard mode action, but do expect a few hidden surprises.

Even though as a pinball game the Phantom of the Opera fails to meet my expectations (me being a HUGE fan of Lloyd Weber's musical), it is still a highly enjoyable game to play.

Pros:
- first is the most important pro; Christine is freaking hot!!!
- the game does succeed in bringing about the theme of the musical on which it is based
- artwork is marvellous (Christine is hot!!!)
- you really do get a sense of being in the Opera Garnier
- Christine is smoking hot!!!!

Cons:
- Christine is blonde (she wasn't in the musical, don't know about the original book)
- the sound is ANNOYING!
>- the main theme is missing. I'm not sure whether this is because Data East wanted to make something new or whether they didn't get the license from Lloyd Weber, but it's missing god damnit!
>- the annoying piano trills when you hit the pop bumpers...
>- the random scream accompanied by what sounds like a 5-year old smashing randomly on an organ keyboard
- it's a Data East (not a proper con, just more of a personal grudge against DE pins)
- rules could have been improved
- Christine is ho... oh wait, these are cons
8.012/10
5 years ago
KEV

Phantom Of The Opera is truly a masterful pinball art package! It is obvious that Paul Faris and the game designers had a passion and knowledge of this theme which is most apparent in the intricate details of the playfield and backglass artwork. A well maintained Phantom with extra hard game settings will prove to be a challenging setup. This along with great sound and music, make for a great all-around pinball package!

KevinG has owned this game in the past.

This game is okay... just okay. I tried to enjoy it more, but wasn't drawn into it. Props on the backglass art.

Finally got a chance to play this several times in a row. Really liked it...I think it is themed well, the ramp shot is fun. Really like the playfield art.

As usual the data east flippers are more than strong enough. Not my favorite data east game but fun in its own right.
8.391/10
5 years ago
ERW

This game is very underrated. It has some great hidden gems about it (phantom millions), double score on last ball shot, and the timer on multiballs which makes it hard to get 3 balls in play, and to get the jackpot. Artwork is impeccable, and the sounds are very good too for a game this old. Highly recommended.

chuckwurt has this game on the wishlist.

Finally saw one and played it in the Claremont Florida area, not a favorite, but it is a decent data East game. I like how the skelton face lights up in the back glass.
2.500/10
6 years ago
???

a beautiful game ,, gameplay falls a little short, still real nice thou
Next123
There are 56 ratings (that include a comment) on this game. Currently showing results page 1 of 3.