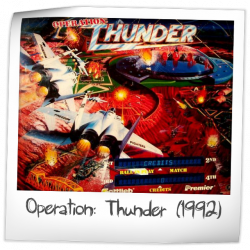 This is an often overlooked pinball machine but for some reason the gameplay is addicting. You keep coming back for one more game more often than not and that's the sign of a good pinball machine. It's certainly not in the realm of the classic 90's Bally/Williams era pins but this is a really enjoyable pinball machine. Perhaps one of the best 90's era Gottlieb pins. Wish I had room to add one to my collection.
7.276/10
64 days ago
MGO

This is my daughters favorite pin. For an old Gottlieb machine it actually plays pretty well. I don't understand the whole powerplant thing, but there are a few shots that are really satisfying to hit.

Operation Thunder is one of the most unique pins I've ever played. Your goals are based on missions that you achieve by hitting the right ramps, holes and targets. I rate it highly for how unique it is. However, it does get old. The power plant is fun at first but can get annoying and repetitive every single time you long the ball.

The playfield layout is pretty cool but there's a ton of red, a little yellow and not much else. It is a great one to have in a collection but not if it's your only pin.

dearliza98 has owned this game in the past.

Fun for a few games, but man do the callouts get old. So repetitious. Not a great game by any means, and certainly not one that will be a "hidden gem" someday. Play a game and walk on by.
7.327/10
5 years ago
JTB

Playfield is a bit hard to discern. It isn't ACDC. I always wanted to put that in a review.

Waited until I owned this game for a few months before I rated it. I basically got one in average condition and cleaned it up. All new LED's throughout, new rubbers, new balls, cleaned the playfield, new flippers, new buttons and a new shooter. I also painted the rails orange to match the artwork on the playfield.

Essentially this is just a fun game with some really cool lighting features. Being a fighter pilot themed game there are lots of great sounds and call outs incorporated and when your 'dropping missiles' or 'hitting enemy targets' the playfield and flashers light up rather impressively. I set up the flashers (from front to back) white, blue and red and it really looks great when they go off.

The game if very linear in the rule set but I think that suits the style of the game. The rules are set up as missions you need to accomplish and you complete other goals to increase your ranking.

The 'powerplant' or spinner is a unique feature as opposed to the usually roll overs most games have after you shoot the ball but it is quite challenging to take out all the lights. Some solid nudging techniques are definitely required. I also added a spotlight near the dome which increases the visibility, the GI was not great originally but some directed LED's and spotlights really make a difference.

Gerrard17 has owned this game in the past.

First pinball I ever bought. My wife and I hated it. I don't like selling this but this had to go, even if it was our first!

You do have yo consider when this was made. It's just not the type I love

rgemagic has owned this game in the past.

Love this pin!
Plays fast when waxed up and put to about 7 degrees and love the music and sound effects. The cabinet art could have been better but i love the translite and playfield graphics. Some people hate the power plant but if you get the hang of getting the shooter speed just right to get the ball spinning and rotate the targets to get the bonus it can be very satisfying and bump your score in the process quite abit. Multi-ball is easy to get which makes it great for beginners to have more fun and also a great range of shots from very easy to near on impossible. Strobe lighting like a runway is fantastic and the fuel aspect ties in the fighter jet theme really well.
In my eyes a very underated pin and for the price is a real steal!
8.521/10
7 years ago
TAJ

Love this machine. 13 levels and it tells you exactly how to get to next level. The game forces you to become a better shot and develop your skills. Can be adjusted to harder settings the better you get. Spinning dome can be annoyingly slow, but also gives it a unique feature. Plenty of action with this game, Its a definite keeper. Fast paced, multiball, specific targets, and a spinner that increaes your fuel. Whats not to love?

I found Operation Thunder strangely addictive. It is a really linear game with pretty standard objectives, but the shots feel pretty good. The fuel feature can be pretty frustrating, but it does add some pressure during some missions. I think for the money, it is a pretty decent machine.

swedishc has owned this game in the past.

Unique linear game plan w/ good shot selection. Not a huge fan of the power plant...maybe I'm just not patient enough. Gameplay is somewhat slow..but there is a large variety of shots. Like the theme & missions...easy enough for a new comer to quickly grasp on to the rule set as the game walks & talks you thru well. Not a huge fan of the timed missions. Fun game but overall not a long term staple in my collection...I have a feeling I'll be looking to trade in before too long.

dj_xwing edited previous rating on July 03, 2013.
dj_xwing has owned this game in the past.

Operation Thunder is a solid game from Gottleib.

The Pros:
Lots to shoot for with drops, long shots and options from the upper flipper. The pop bumpers are hidden so when you hit them, it's a bit of a surprise. You'd better like red, because the plastics surrounding the pf looks like its made of lava. Vari-target back to the upper flipper is something I have never seen before or again on another pinball table. Great shots from the upper flipper once the ball gets bounced back from the vari target. The Mix-master on the top of the PF with targets that can be switched ala lane change is way sweet. Every shot on this game has to be hit for the game to go through all 12 modes. The saucer at the top of the PF isn't small, but it's all the way up there. The superjack is tough!

The Cons:
This game would have been a barnstormer if it had been made 12 years earlier. Finding one is not easy and I've only had the chance to play one copy. Last of the tiny blue display games that make you squint to see the game score/prompts. I heard the spinner before I ever saw it. Certain modes cost you the ball if not completed before the fuel timer runs out. Not that that is a bad thing, it's just not obvious when you play your first game. I can see lots of people saying: "WHAT?!?!?" when this first happens to them.

The Takeaway:
A deck that is in no way comparable to the Bally/Williams quality of game. Look at this game and then look at Addams Family, Creech, Dr. Who and other members of the class of 1992. With this in mind, please consider that the Premier production cycles were 1/4th of those of Bally/Williams/Midway and appreciate this game for what it is. Look past the competition and you'll find a game that is fun, fast and a good time playing pinball. The more I play this game, the more I like it, and that's a good sign.

Unfortunatly i don't have this pin now, i did own one for 3 years it was a great machine.
The game play was a little different to the usual machines i have played each new ball started the next mission, lose the ball and the next mission starts (if you have another ball), also the opportunity to earn a 3 ball multiball, fail and you only get a 2 ball. Another feature of these missions was a time factor, run out of time and the ball will drain like a tilt. I loved this gameplay, some of my friends could never get used to it and just plain avoid playing it. Each to ther own i suppose.
The artwork all over the machine was in my opinion was dull a very low standard, could have been much better.
The lighting was great with its strobing runway effect and gelled very well with the sound effects/music.
The playfield toys/features were cool 2 rows of drop targets, 3 flippers, pop bumpers under playfield tunnel. There is also a domed spinner which has targets around it but you cant see it to clearly as there is too much blocking its view, big shame cause every ball passes through it after the shooter lane.
Overall in my opinion a great game, great playability one big drawback being the art work.

bugray has owned this game in the past.

I really enjoy this game. Of course the timed modes weren't the best idea on route, but they are great for home use. I don't plan on ever getting rid of mine.

1
There are 17 ratings (that include a comment) on this game. Currently showing results page 1 of 1.