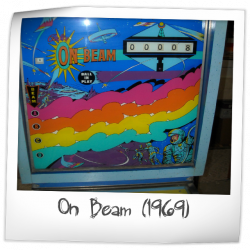 When you're on a tear in this game it's a blast but many balls to be easily lost. The concept and rules are rather complex but you'll find yourself just trying to keep the ball going rather than focusing on skill shots. Artwork is unique and and the game displays very well - One of the best bang for your buck pins out there if you can find one in good shape.

AdamPDX has owned this game in the past.

Absolutely gorgeous playfield. The artwork really draws you in along with the vintage sounds. So much fun. My wife really loves this one.
7.176/10
7 years ago
ZUL

On Beam is an interesting and technically ambitious design from Bally in 1969.

The Pros:
This game screams "Space Race" like few others. The entire art package is well done and the BG animations integrate seemlessly into the gameplay. The rules and the features of this game are quite advanced for the vintage of this deck. The extra ball / ball kicker onto the PF from between the flippers when a star is awarded, is quite novel and a real surprise to players when it first happens. The "coffin" lane dividers at the top of the PF are way sweet! This game is surprisingly fast when properly tuned.

The Cons:
This deck plays at such a hectic pace that the "Docking" feature is rather random and adds quite a bit of luck to the gameplay. Quite often the ball is projected back into the PF and all the player can do is say "That was a nice surprise. The gameplay can be boiled down to "keep the ball on the PF as compared to making skilled and deliberate shots. That and there is not really that much to shoot for on this deck. As much as I love mushroom targets, I think the smaller standups are a better layout implementation of this game's ruleset. Balls kicked onto the PF that fall right back into the outhole bum me out.

The Takeaway:
This game comes in two flavors, replay and Add-A-Ball. The strange thing is, both decks play like an Add-a-ball with the stars on the BG and the ball kickback. This was the only other game other than "The Atarians" that Bob Jonesei designed. Another quiet unsung part of the pinball puzzle gave us a very interesting game. Rack up those stars!

I am still getting to know this deck. As I have more information to report... I'll post it here.
1
There are 3 ratings (that include a comment) on this game. Currently showing results page 1 of 1.