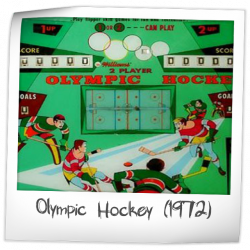 Have played Bally's and William's EM's over the years but have always gravitated towards Gottlieb's. When looking at the #9 rating on Pinside I just didn't get it. How can this table get such glowing reviews when there appears to be so little to shoot at? One came up for sale locally and was lucky enough to grab it to see what this fuss was all about.

How can you make a hockey themed pin that actually works with the games concept? The backglass animation is cool and the rink provides a unique visual appearance providing a lot of depth to the look of the head. But in actual gameplay you really can't look at the backglass animation or you'll lose the ball. Like everyone else has stated, an incredibly fast game without using 24VDC on the pops or flippers.

As others have said, brutal left outlane but not uncommon on Williams/Bally's with the kickers right above the flippers. Set the tilt very loose to allow some supple nudging to help fight off that left outlane.


Goal Scoring: The "goal" of the game is to increase the steeper unit a total of 10 times to score a goal. The game logic on the A and B rollovers at the top of the playfield will increment the stepper 3 times when lit. This option stays lit until the goal stepper unit reaches the #5 position, from a hockey game standpoint you've enter the opponents blue line. Once the stepper is in position #5 the A/B advance of 3 is no longer lit. Like hockey, gets harder to score as you get near the net.

Didn't hit the A/B rollover on the plunger? The center pop is your next target to advance the goal. The goal Advance stays lit on the center pop until reaching position #5 on the goal stepper. Once past it no longer advances the puck.

Hitting any lit rollover button will advance the puck on step toward the goal. And the sweetest shot on this table is actually when the ball matches the arc of the rollover buttons to score a goal. With some finesse and a little luck you can get the ball to roll just right for this to happen.

Likely the only EM I can think of that needs a topper! Where is that red light when the goal buzzer goes off??!!!!!

Point Scoring: To rack up points the A/B rollovers are a must to get the pops lit up. When a goal is scored the center pop goes to 1K point instead of 100 after a goal has been scored. The center stays lit at 1K points until the puck is reset to center ice. But points-schmoints...this is hockey!

Also as people have stated, this game can get amazingly fast. From a gameplay point of view, awesome table design by the master!

And yeah, what happened to the budget for the art department on this one? I don't have an issue with "pointy people' but did William's run out of them for this pin? And who at William's got the great deal on the huge vat of green paint? I am a Marche fan but I can't believe he put his name on this one.

With that said, it works better in a dimly lit room. The green take on a more muted look versus what you when the room is brightly lit.

I was skeptical of the high ranking at one time. After playing this pin, brilliant!

Fun game with dual objectives (points and goals) More fun playing against someone, and hard to win both goals and points.

One of the best EMs of all time. Great artwork and gameplay. If I were into hockey more, this would likely be my favorite EM of all-time.
9.011/10
2 years ago
RUF

Just finished restoring mine mechanically and getting to know it has been a pleasure. I think someone else mentioned that the score reels on the game were useless. I disagree, I like the noise they make but could not care less what they say! Who needs stupid score reels- you play this game for goals. And its amazingly well done. The them and integration and rule set and shot difficulty are all great. It just comes together in a loud- fast- buzzer happy- goal feast. I love the center post. Its super easy to hit those shots- but also very difficult to keep the pinball from hitting that big down post rollover- right between the flippers about 4 inches up.... so the game is constantly changing- and then the hockey rink animation rocks. Its a bonus counter where you are rewarded a goal for scoring the puck by movingit across the rink- hit lit targets and the puck moves. Score a goal and the super awesome goal buzzer sounds. Want to score another on that ball- better reset the puck to center ice using the tip of the flipper, a finesse shot, to fling the ball through the reset path and then start trying to score again.

Note added: Spent hours playing this with a friend last night. My rating is only going to go up. We literally only played this game. Player vs Player is FUN! Its weird how different playing this game is, its pinball for sure, but the competition absolutely changes the game. Somehow it becomes a Hockey game.... absolute blast. I woked up this am and bolted it to the ground.

What a great EM! It’s like the Cadillac of EM’s with all its features.

Tons of Rollovers, raising save post between the flippers(or whatever its official pinball name is), animated backglass, automatic outline gate, two bells (and a buzzer for goals), hockey themed which is rare enough in pinball for some reason, and the second set of scoring reels that count your goals. Head to head hockey pinball madness!

This game is a must for any collection, especially a Canadian one like mine.

“Oh, The good old hockey game, is the best game you can name”
-Stompin’ Tom

It has a hockey buzzer when you score which is amazing! And a puck on the back glass that moves as you play! This was in 1972!! A little difficult to play. 8/10

Herk has owned this game in the past.

Surprisingly fun EM game. Very well implemented backglass rink with puck that advances as you score, especially for 1972! There is a goal counter and great bell and buzzer sound when you score. Great game to compete with someone else in 2 player mode. One of the best EM machines IMHO. Pick one up if you get a chance, not a lot of them out there.
8.841/10
5 years ago
GTX

Pin was picked up as an extra as part of a package so had no real thoughts on the game going in aside from the fact I really have no love of sports themed anything in general. This game is a blast!! From the rippling speed (for an EM I guess, I tend to give them a pretty good rake though) to the general awesome game flow, to the backglass puck animation (reflected in the play field lighted switches) to the multiple ways of advancing the puck across the ice (PF switches, center lanes, center popper, upper bumper, A/B lanes, out lanes) to even the goofy buzzer that sounds when you get a goal! This game was a home run for Williams and one we gravitate towards when heading out to the game room. While fun playing single player it really shines when playing against an opponent. The left outlane is brutal at sucking up wayward shots and the center ball saver post delightfully evil with its "now you see me now you don't" behavior the game pulls you back in time after time. If the game had an "player shoots again" option it would be perfect. A keeper in our collection!

Grew up with this game at my grandparents so the nostalgic factor plays into my rating. The animated hockey puck in the backglass is a nice extra feature that distinguishes it from other machines. Also since the number of goals scored is displayed on the backglass, you can play for high score or high goals!

I wish lighting the upper lanes were more of a skill shot during gameplay. Racking up the real high scores requires all the pop bumpers to be lit. You can light one lane with a good skill shot from the plunger but getting the second lane lit tends to be luck based on pop bumper action.

The green color choice is a little odd to me for a hockey game but I do love the look of the players.
Overall, a fun game for me because of my history with it but not the most enticing playfield setup.

Great Em game. Backglass rink with moving puck is especially cool and buzzer sound when you score a goal. Tough game, left/ right drains are killer and tough shots are required to reach scoring/puck moving lanes beyond mass of top bumpers. Scoring like gretzky not likely. Love the colour, just wished body was painted dark green to match a similar color on backglass/Playfield. This game screams cool retro. Would never part with mine.

1
There are 12 ratings (that include a comment) on this game. Currently showing results page 1 of 1.