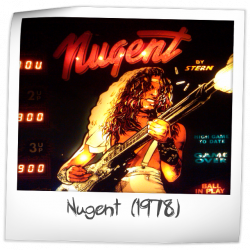 Fun game but can have some really quick ball times. I can't say how many times the ball drained after clearing the top rollovers. But still a pretty fun game.
8.526/10
1 year ago
OGA

Played Ted Nugents pin quite a bit at Pinball Madness event. I really enjoyed it.

Considering owning if I find one in great condition for a decent price.
3.776/10
1 year ago
CLA

I think you must need to be a big Ted Nugent fan to enjoy this one. The red, white and blue on the cabinet is very attractive. The sound and music is descent. The playability just is not there, even taking into consideration its age.
7.303/10
2 years ago
PBS

Gonzo, Stranglehold, Free For All, Cat Scratch Fever, only a few of rockin’ and jammin’ songs from Ted Nugent. All featured on the playfield of Stern’s Nugent pinball machine from 1978. It had a production run of 2,873. The game’s backglass, taken straight from the Weekend Warriors (1978) album cover, depicts Ted Nugent with his famous 1962 Gibson Byrdland guitar firing off rounds as if it were a machine gun.

Nugent is a very awesome looking game restored. I love red, white, and blue with chrome. It's got a typical "build the bonus" type rule set that was very common in the late 70's and early 80's era. The best strategy is to hit the upper right target bank to build your bonus multiplier, then go for the left target bank to light the extra ball shot that is at the upper top lane rollover. The third flipper keeps things interesting for hitter the left side.

At first I thought this was going to be a pretty dull playing game based on previous reviews. But with all new posts, rubber, a slicked playfield and full incline with 3" levelers in the rear, I found myself playing it quite a lot as it plays real fast. The sound is basic electronic sounds (from 1978) that I think is great during parties or when you want to crank up your own tunes. Shorter ball times also make this a fun multiplayer game.

pinballshark has owned this game in the past.

Nugent is an excellent example of an early Stern Solid State machine. The playfield has plenty to offer with it's two drop target banks, spinner, bonus saucer, pop bumpers and free ball return lane. New machines enter my line up and some machines leave - but the Nugent remains and will for some time yet. A lot of fun to play and an excellent trip back to the early days of solid state machines.

Jesder has owned this game in the past.

As a metalhead, I got one of these and spent some time getting it operational, only to get bored in no time flat. They didn't even bother to put in some Nugent riffs in the sound - even Kiss and Dolly managed to throw in a little something to tie in the theme. And as far as gameplay goes, it's kinda embarrassing that Dolly mops the floor on Ted. Happy to have it out to make space for something better.

SteveRivet has owned this game in the past.

Nugent is a relatively rare game that happens to be themed after The Motor city Madman.

The Pros:
A build/ collect bonus scheme that will keep player flipping. Good shots and a nice range of shots with drops. The spinner is satisfying and the rollover buttons at the top of the lanes will keep your nudging (nugeing) skills on point.

The Cons:
For some reason, the BG's on this deck have a bad habit of flaking. The upper flipper has shots to the drops and the bonus collect lane, but the play mechanic is not well implemented. The sounds are lacking. This game goes for crazy money due to a rabid (literally) fan base for the theme.

The Takeaway:
This is a decent game (to play) from Stern v.1. Crank up your Nuge while playing this deck... Because you happen to like to play pinball and/or you're a Ted Nugent fan. Otherwise why own this table? So you can use it for target practice with your laser guided crossbow?
6.174/10
11 years ago
BAY

The Nuge using his guitar as a machine gun on the backglass is classic, can't say the art is great, but the theme is pretty cool if you like old rock 'n' rolla. Too bad it doesn't play "Cat Scratch Fever" but is probably before the song was released. One can be found at Merriweather Post in Columbia, MD (US) if you attend a concert there. Nice touch for a music venue. Will try to get some pics next time I go for the site.
1
There are 8 ratings (that include a comment) on this game. Currently showing results page 1 of 1.