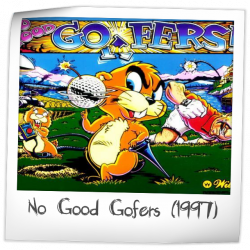 There are 207 ratings (that include a comment) on this game.
Currently showing results page 6 of 9.

Not a deep rules game but fun. Its too bad the game code was never fully optimized because it could be an awesome game as well as fun. The air ball / hole in one shot is my favorite one in pinball and ingenious.

One of the most underrated Williams games. Fur extra fun place the gophers on the extra rude setting.

The hole in one shot would be enough for me. Othe than that its still extremely fun
7.848/10
8 years ago
ESP

I really enjoy this pin. I love the hole in one shot and the fact that the ramp raises on the PF to hit it. Not into golfing at all but still fun non the less.
8.124/10
8 years ago
ROB

I had to substantially adjust my rating upwards after playing a well conditioned, LED'd, dialed in version of the game. Played smooth and flowed way better than I remembered. A lot of fun shots with a lot of good variation and ability to backhand most shots. Well thought out game and the theme has grown on me.

Nice Pinball but not my favorite

An enjoyable game, even if you don't do so well on it. This game is underrated and is really good. One of my favorites and I wished I owned this one.

An entertaining Pat Lawlor game that sets your sights on hitting gofers and trying to complete a nine hole golf course. The pop up ramps that expose the gofers is fun and challenging. They do taunt you throughout game play.

As with other Lawlor game, the is an upper right flipper that you can hit a ramp on the left side of the playfield. It's a tough shot, needed for jackpots.

The layout is packed and the slam ramp is a great idea, who does't want a hole in one. A fun playing game that a casual player can enjoy, but challenging enough that you won't go through the 9 hole course with ease.

This game would fit nice in a bigger collection , though it will not have long legs if its the focal point. Fun to flip a few games on now and then and great for a new player.

Fun, light hearted game. Buzz and Bud the Gophers are as funny as can be. Music is great and game play is simple and straightforward without a bunch of modes to go through, just shot the holes, get your award, and play on. Multiball is challenging and the hole in one shot is awesome IF you can make it!

That's a game who splits the opinions. You love or hate it. It's simple, i love it!

Great Pat Lawlor game and very funny speech too I like the slam ramp that puts the ball into the hole in one shot idefinitely adds creativity to the game
7.728/10
8 years ago
JRK

I liked the quirky factor of this pin. It is fun, but didn't have much lastability for me. The graphics look really cartoon like and didn't catch my attention in the long run.

Overall a fun pin, but don't make it your only pin. Great to have in a collection of a few pins

jrivelli has owned this game in the past.

Gofers is a great game that keeps giving the player that one more game feeling. The slam ramp shot to get the hole in one is so satisfying if you hit it. The gofers are great to smack around and modes are fun to try an rack up points.

MAJRob edited previous rating on January 03, 2014.
MAJRob has owned this game in the past.

One of my fav pins I've ever played and now it is the first one i've owned which also led me to this site. :)

Rengozu has this game on the wishlist.

Poor overrated game. No flow whatsoever. Can't believe how high it is on the top 100. Put in $2 and walked away with three credits left.

Played this game again on a machine that was set up correctly. More fun than before. Game got me to buy in and really enjoy.

The Slam Ramp is pretty awesome and I love the wack'a'mole feel with the Gofers Bud & Buzz. The Hole-in-One shot is challenging and fulfilling when you make it!

The taunting by the Gofers is a great touch...I just wish there was more of it:-)

The skill shot could be better, but overall this is a light-hearted theme which anyone can get into....especially when they see those pesky Gofers popping up and down.

Ferros edited previous rating on July 30, 2018.
Ferros has owned this game in the past.

I am far from being as enthusiastic as most.
Pros:
- "Hole in one" shot is alway great
- Original bonus calculation
- humour...

A great theme and an all-around fun table. Something that casual players and more advanced ones can get into. The game plays super fast and will keep you on your toes. The gophers do annoy you and I understand those who feel it adds too much luck to the game. So if you're highly competitive, maybe take a pass. If you're just looking for fun, this is great.

The artwork and cabinet are stellar and it's one of the best looking pins out there. Love the sounds, the animations, everything with the theme. My only real con is that it can be difficult to hit a few shots and can be frustrating to deal with the randomness of the gophers. Makes this a great party pinball machine but not one I'd take too serious.

I love the Gofers! I just like the way you have to make drives and putt out. The layout is so unique and there is nothing else like it. Wish it was licensed Caddyshack but you get used to it. Saw one at Pinball Expo with LED lights and it was awesome. Will own one some day.

Next on my wishlist. Love this game. Some tough shots but a nice open playfield and a great light show!
8.592/10
8 years ago
DNW

This is an AWESOME PIN! The theme works. and i love the moving ramp shot to get the ballto the "green" Making the skill shot be a Hole in one is an awesome concept, and when you achieve it, it feels great! Love the gophers which pop up out of the playfield. And then you get to bash them! Go play it!
7.680/10
8 years ago
ZUL

No Good Gofers is another creative design from Pat Lawlor and his team. This game is fast fun and has (surprise) great flow. Pat's fastest game ever!

The Pros: The hole in 1 shot is the first multiple level jackpot. Super Jackpot with bugging gopher eyballs still cracks me up! 3 pop bumpers snuck into the playfield on the outsider of the lenft orbit add quite a bit of lateral action to the ball's entrance to the pf. better be ready. One of the best multiball start sequences ever. I think I like this Multibal starting sequence it even more than TAF's. Pat Lawlor is a createive pinball genius! Popping one of the gophers and hearing him say "OWWWWW!" is always satisfying. The fireball disc in the PF is back, and this time it gives you awards! A classic character study of the wisecracking crank and the ideeeeot with rocks in his head as a comedy team. Pinball is theatre on this table and you are... the golfer.

The Cons: Lighting the kickback is a chore (is this a Steve Ritchie game???). The deck HAS to be operating and set up correctly to make critical ramp shots. This game should have been one of the all time best... software bugs keep it from the absolute pinnacle of pinball greatness. "Calling mystery programmer! Please de-bug this table!" No super wiz mode (or incrementally increasing awards) for completing 18 (or other multiples of 9) holes...

The Takeaway: The game is called No Good Gofers... that means the gofers are MEANT to annoy you and get in the way of your shots. Get used to this blocking and mocking, knowing that the joke is on you... or play another game, (in Bud's voice) "ya pinball sissy!". Personally, I'd absolutely love to own one of these tables.

Update:
After Acquiring a very nice copy of this game in a trade and really playing it and taking some time with the rules somethings became apparent. First of all, maxing out the bonus at 5x when she know what to do is incredibly easy. The second thing is that the Ripoff multiball is much too powerful for such an easy feature to start, to the point of being unbalancing for such a minor goal of the game. Unfortunately this game suffers from being Koziar'd. The rules man... the rules. Software is rando-buggy to the point of it not being multiplayer tourney worthy. Good thing that zydeco music makes for great pinball tunes!

I have also come to the conclusion that this may be Pat Lawlors most creative layouts. Ramps that throw the ball above and open to reveal subway holes below the playfield (in the same shot, twice). The skip ramp leads to 2 targets, a ramp and the incredible hole in 1 shot that even acknowledges ricochet shots into it. A great game to practice multiball skills on and between the angled geometry the evil and random exit out of the pops and the horizontal spinner on the lower pf, the ramps and the orbits are the only safe shots on the game.

Update v.2:
Owned it. played the heck out of it. Sent it off to a good home. It's the rules man, it's the rules... Another great Lawlor game that got Koziar'd. A damn shame, the copy I had was a frikkin' museum piece!

this game has been a lot of fun the limited times I have played it. I would like to own this game. Who wants to trade? :)
PreviousNext123456789
There are 207 ratings (that include a comment) on this game. Currently showing results page 6 of 9.