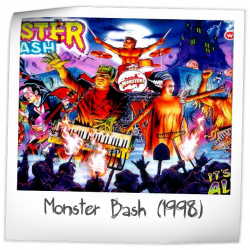 This game ranks 3rd in the game group "Monster Bash". The group itself ranks #4 in the Pinside Pinball Top 100.

There are 512 ratings (that include a comment) on this game.
Currently showing results page 1 of 21.

The best thing about this game is the humor. The gameplay is a little tedious at times. Challenging, but doesn't make me want to play it again and again.
9.360/10
38 days ago
RHS

Hard to fault this game, it's almost the perfect pinball experience. Reminding us all why we love pinball so much. No matter how old or grown up you are, your inner child comes out to play when you step up to this machine. This and MM are the finest examples of pinball excellence.
7.940/10
44 days ago
RSC

I have great nostalgia for this game, love the art and overall theme. Unfortunately the overall gameplay can be a bit repetitive as compared to more modern games, its just a product of its time in that regard.

R_Coles edited previous rating on January 27, 2021.
R_Coles has this game on the wishlist.

The ultimate, and one of the first, “bash toy” games. Really fun to play in small doses, but not one to spend hours on. Another pin that would be great as a home pin though, especially as part of a group of pins...
7.355/10
64 days ago
???

Boring!
To dang easy but for back in the 90s definitely good!

An overall great game. One of the best of its era and still worthy when compared to the games of today. Even if you are not a fan of the theme, there is enough variety and shots to keep you coming back.

Not worth all the hype. Y'all fanboys gotta calm down again.

The playfield is dark. Just dark. The RGB is cool but it's hard to actually see the ball. That's Not fun.

The left ramp is fun but takes a perfect shot. That's NOT fun.

The scoop is easy to hit but is boring and doesn't do anything of substance. That is NOT fun.

Drac is cool. Frank is cool. The ramps are cool and fun to hit.

And ... That's it. Y'all talking about flow... What flow? Granted I only played a handful of games but it's pretty easy to see and feel a game.

Doesn't compare to house of horrors, or new avengers le, or star trek, or lotr, or any other game with any flow.

The go-to. Everyone loves it.

HauntedSpaceship has this game on the wishlist.

Gonna get crap for this one, game is good, but I found it too simple.

Toys are outstanding, Drac on a stick, Frank in a box, all fun. Cabinet artwork is great and so is the translite.

Animations are good for DMD and quite funny.

A good package, but I feel overhyped. I feel that since it was remade, that just added to the ratings. Is it better than WIJ or STTNG, no way. Never owned one, but have played it enough to not add it to my collection.
7.376/10
4 months ago
PPD

Good Gomez layout. Shots are satisfying, humor and toys are great. Not enough code or challenge to make me come back to this game. Top 100 game for sure
8.736/10
4 months ago
RHO

Just the depth of the rules should be deeper. On standard settings playing monsters of rock on ball 2 within a few weeks of owning the pinball .... And yes you can set the settings tougher but you just see to quickly everything this pin has to offer.

But the shots are satisfying and very makeable combined with good gimmicks animations and art so I understand why it’s a number 1 for a lot of people. It ticks a lot of the boxes which define a good pinball.

One of the best overall games ever made. Still holds up today, even with the rules of modern games.
7.339/10
5 months ago
DAD

Really love MB. Unfortunately, the one that I played had a bad case of SDTM from the scoop, so it wasn't quite as fun as it should have been.
10.000/10
6 months ago
TLL

I have never owned MB but have a few friends that have. It has a strong nostalgia factor for some and the theme is fun but it doesn't seem to hold interest in the home environment that long. Both my friends sold theirs after one year or so.
9.060/10
6 months ago
BAM

A fun game for the family. While only 2 flippers, the playfield design makes in different to the standard fan layout of some games. The machine is well integrated with the theme, combining a range of modes with toys and lighting.

One of the first pins I ever bought and sold. Now, I have the remake LE. I love love love the theme. Love the art. Rules are a little shallow of coarse. The pin is so approachable and instantly fun for everyone right off the start. The toys are the best part. The music is good. The call outs are funny and well done. What more fun could you have than BASHING some Monsters. It really has it all except the depth in the rules some players crave. Overall pin package is outstanding.

What a fun game. The rules are so simple, and yet the game still offers a challenge to a veteran player. If I’m trying to introduce someone to pinball, this is the machine I use. They’ll instantly understand the idea of completing ‘modes,’ and also mode stacking and strategically timed multi-balls.
9.288/10
9 months ago
MAD

Rock and roll and monsters. They go together like Elvis and pomade, UFOs and mad scientists, and fries and ketchup at 2 AM at the diner. There are a ton of rock and roll themes, almost as many monster theme machines, and even a couple of others than combine the two, but none quite captured the goofiness and fun of making a complete rock and roll band out of the classic monsters.

The reason this machine is still so grand is it's the epitome of the classic Bally/Williams era, as deep a rule set as the original DMD generation got without being overhwelmingly complex, with a simple to understand wizard mode that is just as much fun to get the 100th time as it is the first. The shots aren't horribly innovative, but they're a reasonable combination of ramp-happiness of the era, a little bit of fan, and some odd short shots necessary to get the whole band together.

I've only played the remake once so can't comment with a depth of experience as to how it compares to original era machines, but the one I played felt much closer to the original Monster Bashes than the MM or AFM remakes have (both of which feel a bit off to me). That said as the grand triumvirate of late golden era games, it's quite a set, and Monster Bash plays quite a it differently than AFM does from MM or vice versa.
10.000/10
12 months ago
???

In my eyes this is a perfect game.

I play this game whenever I get the chance.

I'm sure if I owned one it would be easier to pick up on its flaws, but I have yet to generate any criticism for this machine. I'm pretty sure this is the only pinball game I can say that about.
9.900/10
1 year ago
MCP

I own this game and I feel it’s one of the best in pinball. There are so many great toys and it never gets old. The artwork and gameplay is terrific and it’s great for all ages. Whether you are old or young this is a classic game that everyone loves.
8.740/10
1 year ago
CLG

"It's a graveyard smash!"

1Chance has this game on the wishlist.

Everything about this game is fun, it checks all the boxes for a good flippin' time. Monster Bash and Deadpool are George Gomez's best playfield layouts so far.
Next1234567891011... 21
There are 512 ratings (that include a comment) on this game. Currently showing results page 1 of 21.