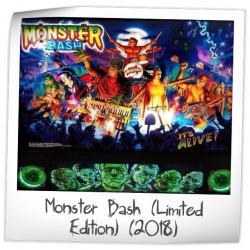 This game ranks 2nd in the game group "Monster Bash". The group itself ranks #5 in the Pinside Pinball Top 100.

There are 96 ratings (that include a comment) on this game.
Currently showing results page 4 of 4.

One of the all time greats! Shots,build quality,sounds,call outs are excellent
MBrLE is the way to go.The topper is one of the best out there!

bmegar has owned this game in the past.

One of the most fun pins you could ever play . A classic and the remake os real quality . The LE has all the bells and whistles including plasma effect . love it

This is CGC’s second best remake.

This is George Gomez's career highlight and having Lyman Sheets do the code helps too. Rarely would I come across one in the wild and whenever I did, it was always a bit of a disappointment due to the fact that they were beat to hell (especially the scoop). When CGC announced they were making remakes, this was easily one of the three that they had to make. And now that they have, it fulfills a dream of mine to actually own this incredible game. The remake is every bit as good as the original made better with new reliability, technology, animations, and an incredible interactive lightshow.

I've always loved this game's use of the universal monsters license and the concept of you hitting shots to get the band together to rock. If you're an experienced player, this machine might seem a bit easier. The two available wizard modes are more accessible than most games, but I don't think that really detracts from its overall fun factor. The game has great flow, funny callouts, and has some of the best toys in pinball to interact with. For inexperienced/new players, MB is very approachable and its fairly easy for them to figure out how to play. The rules are pretty simple to get into. The real key to getting consistent high scores is to 'never start Frank alone'.

The flippers feel great, phantom flip actually works, and the new animations on the XL DMD are really great. The new interactive GI lighting adds to the experience. There is a reason this machine has been consistently in the Pinside Top-3 machines of all time, and the remake solidifies its place in history. A true work of art.

I was REALLY impressed when playing a remake for the first time this weekend.
It's just like the original, but brand new and it has me considering picking up a classic.

Pros:
Bigger screen is great
Updated animations are top quality, a huge diff'rence
Plays just like the OG to me

Cons:
The upper models add a ton of clown puked lighting and it is horrendous. Looks like a newb bought their first pin and spend $200 adding LEDs for god knows what reason. I've been told you can switch that off in the menu though but not sure.
With the bigger screen the animations have been updated with tiny dots and it looks fantastic, but when it switches back to the score the pixels go back to being 5x the size, it's a little weird and doesn't look right.
Gotta move up to a bigger model if you want the bigger screen. That's just business but I'd much rather have a classic with big screen.
9.760/10
2 years ago
MCB

The LE is amazing. Love the topper. Love the color changing GI. The whole thing is a work of art! On top of that the game is a blast to play. Yeah maybe the rules are a bit shallow? But I like that. It’s fun to get to monster bash mini wizard every once in a while and monsters of rock is still deep enough it takes a really good game to get to it. One of my favorite games of all time and the remake LE is just over the top amazing.

WackyBrakke has owned this game in the past.

I recently acquired a MBR LE and it's an amazing game. I'd played the original at the PHoF enough to know that I would like the game, but I was still surprised, particularly by the beauty, fun, and quality of the remake. It really is an amazing game with so many toys. I bought it thinking it would be a good game for ladies and non-pinball folks to play, but I also can't get enough of it. Yes, I will confess that it's an easier game than the newer Sterns, and I've already played Monster Bash, Mosh Pit, and Monsters of Rock more than once. In fact, I often get to Monster Bash. Still, It's great to have in a medium sized collection, probably more so for guests once the honeymoon period wears off. Though, right now, it's just about all I play other than BM66. It might not last long in a small collection, of say 4 games or less, but for my collection about double that, it fits in just right. The theme, comedy, music, and toy interaction makes the game unique among all that I've owned since joining the hobby.

The remakes are beautiful. I have played the original extensively and also the remakes extensively. The remake MB is another quality offering from CGC. The all LED light show is awesome and the game has a great layout. It's fun for all ages. Depth is ok, which detracts from the lastability a bit, but otherwise there is just so much going on with ramps that are like butter. The shots are satisfying and not difficult to hit. The LE version has a very nice topper. Wish it were animated, but it's still beautiful.
8.256/10
2 years ago
DAD

Monster bash is one of the greatest games of all time. The remakes only improve on that experience...

Great pin, great theme little difficult for me since I’m new to this hobby. This is my first new pin I purchase so I highly recommend to any new member thinking of buying it’s well worth it the family loves it

love playing this game. rules are easy to follow. not over complicated. love the call outs. love the redesigned animations.

fxdwg has owned this game in the past.

The LE version of Monster Bash remake is just amazing. The game plays smooth and every bash toy appears to be registering properly when hit.

This is a game that I always come back to. Every shot progresses you further to a goal. The sound and call outs are spot on. Everything about this machine is high grade quality. I would recommend this pin to anyone. Especially beginners.

Really nothing negative to say. I just wish the animations came on an lcd with some old Universal movie clips and the topper for the LE was animated. These "improvements" would really freshen the game up a lot. But, it is supposed to be a remake and it excels at that

arcadem has owned this game in the past.

So now that I've put over a hundred games on this, I feel its a good time to rate it. First CGC has made one of the best looking games out there better with the detailed painted toys, mirrored blades, super cool topper, and blue powder coating. The added RGB light show really adds to the mood of the game, I couldn't imagine not having that feature now. The improved graphics and wide display is top notch. The game shoots smooth and played perfect right out of the box.

Now, I have never owned a MB before, so I was worried about its lastability. I can tell you that I'm no longer worried about it. After 138 plays, I find my playing sessions consist of at least four to five games. So yes the compulsion to hit start again is certainly there. Also, I find the game plenty challenging. Of course I'm not a great player, but I'm not terrible either. I'm finding this game to have short ball times. My average is just under a minute and I'm smacking the heck of out it to keeps drains to a minimum. I have reached Monster Bash two times and have yet to reach Monsters of Rock, though I was very close.

Overall I think this was a good purchase and I have no regrets. It looks awesome next to AFMLE.

bigdaddy07 edited previous rating on March 13, 2021.
bigdaddy07 has owned this game in the past.

As soon as they announced the remake I HAD to order one! Shhhhhhhhh!....the wife doesn't know yet....maybe she wont notice the big delivery truck and I can just slip it into the collection.
8.544/10
2 years ago
JCS

jeffspinballpalace edited previous rating on May 21, 2020.

Previous1234
There are 96 ratings (that include a comment) on this game. Currently showing results page 4 of 4.