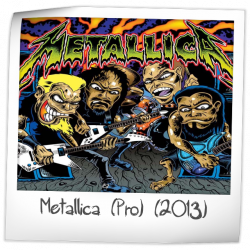 This game ranks 2nd in the game group "Metallica". The group itself ranks #13 in the Pinside Pinball Top 100.

Note! There are multiple versions of this game!
This is "Metallica (Pro)".
The other version is: Metallica (Premium/LE)

There are 368 ratings (that include a comment) on this game.
Currently showing results page 12 of 15.

Played in arcade in wardar street london. They had 3 machine and this was worse. Friend and I just didn't get on with it, nor did someone else who seemed disappointed she had another credit.
9.680/10
7 years ago
WYO

the depth of this machine is crazy (1.51). I used to hold ac/dc above this machine, but not since the updates. the combos, all of the MB modes, crank it up...etc, etc. blah blah...top 5 all time for me.

Ballsofsteel has owned this game in the past.

This is my favorite pinball of all time; can't wait for band member modes

musketd has owned this game in the past.

My first contact with this pin was when STERN annouced it,
and we can than grab some infos all over the net... Must admit i was not really
in touch 'cause i was not (and i'm still not) a METALLICA music fan... Than, i
first met the pin in real in a tournament, which i can only play 1 game, in final
to win the contest... I feel quite happy with the pin, not sure if it was the
result or the pin itself (or the 2) !? Few monthes back, i found one in location
near our house, we (my son & i) go than to play it more deeper, and directly we
found it good & addictive : it was with the old code, but even that, we have
great fun playing it & "knocking" it, making lots of free games on the day... And
than, the idea grows in my mind to buy one (MET or ST !?), even more reading over
the net about the new code coming, to finally order one & received it last
wednesday... Its surelly a bit early to put online my though, but really the
impact is more than positive, as i'm a regular pinball player, and most of the
time, i know what i like and what i dont ;)... Just a last note to say that i
choosed the pro to avoid the probability of having bugs with the hammer, which is
of course a nice toy when it works OK... May be more later ++

EDIT : code is now 1.6, pin is still very good and entertaining, better than before, than i have to raise my previous rate ;)

EDIT2 : still enjoying this pin, even more than before, that's a clear sign that STERN has made here a real winner ! good job on MET

RipleYYY edited previous rating on June 01, 2020.
RipleYYY has owned this game in the past.

One of the best pro models Stern has ever produced. It looks so much better than many other games due to a good artwork package, metal ramps and a decent Sparky toy. Add the ideal music to play pinball and we are getting somewhere. Finally Lyman's coding takes this game over the top and it is still not yet finished! Crank it Up has really made a huge difference with jackpots, gambling them, cashing them in etc.

I think this game may end up being rated as a classic in years to come. Oh and having the real voices of band members doing call outs separates it from AC/DC. Finally hitting combos on the metal ramps is so satisfying, just so smooth.

Shapeshifter edited previous rating on April 07, 2015.
Shapeshifter has owned this game in the past.

Old sparky is way cool. Not a Metallica music fan but this theme and the music clips rock! Some choice sound effects and music clips and excellent vocal callouts are brilliant, really suiting the theme.
7.088/10
7 years ago
ROB

Better than the LE due to the fact that the ball lock feature is better and does not block the view of Sparky. Fun

This game has the layout of a classic game with great long shots and beautiful stainless steel ramps instead of plastic ones. The best of the old style playfield layouts with the latest technology...and more code updates to come. Great game, especially if you like Metallica. I find myself singing and thrashing to the tunes frequently when I play. The game is frustrating at times, but that's what makes me keep coming back for more. I hate it and that's why I love it!!!

Played a few games at the 2014 Texas Pinball Festival. I can't comment about he sounds because I could not hear it well... very loud there. The artwork, toys, and LED lighting look cool. the PF layout is too open for me, most targets are on the top.
7.753/10
7 years ago
CGZ

Definately a down grade from the premium. Lack of leds, hammer, coffin etc really take away from game play. Still decent to play
8.896/10
7 years ago
SDC

I'm not a fan of the artwork on this game, but I love Metallica and with the recent code update this game really shines, an excellent game.
9.740/10
7 years ago
SSD

Just an awesome game that never gets old for me. I enjoyed it before the latest code update and now it's even better. Game is a keeper for me.

I love this pin even with the basic code. It's simple and is a throw back to old school pins like Gorgar in layout and look. The new code update puts it over the top. Sparky Multi-ball is probably one of the best multi-ball effects of all time. Never gets old to electrocute him. Multi-ball is super fast paced and after a good one you feel like you got a work out. Ramps are difficult but fun. Orbits are great. This game feels great to play. Fits like a glove. Since it's been released the game has not been very deep in rules which has turned off some hard core players. However for me the simplicity made it fun and nostalgic in play. Plus the updates in code will only make it better. This is one of the best Stern releases.

So bright, I loved the lights and music. The playfield seemed a little barren to me, but perhaps I will change my rating with more gameplays.
10.000/10
7 years ago
???

It's a fun layout , and the sparky toy is awesome ......and upgrade makes this title a blast to play

Keeps me coming back for more. Could look at the artwork all day. Rocking Sparky never gets old and puts me in a good mood everytime. Best pro model yet!

AC/DC it is not, BUT this is a fun game to play. I don't even care for Metalica but for a few songs, and I enjoyed playing it. If you're a fan of the group, you'll love it even more.

Great sound couple with some fun adult call outs. Good flow to the game as well.
9.420/10
7 years ago
DEB

I love my Met Pro from the first time I saw and played it. Incredibly fast, especially since I disabled the up post. Now, the orbit shots are like missiles flying around and around the table. I love inline drop targets and these are hard but so satisfying. The Sparky is an amazing toy - watch your friends' jaws drop when he lights up! I have modded mine with guitars, speakers, a sparky coil, etc. and I don't even like Metallica. One of the great, great games IMO.

Once the new code hits - it's top ten for 'tallica!!

I'm rating this after playing it for about 8 games last night. I did not rate the sounds because the venue had it turned down so low you couldn't hear anything which really sucked. The game is fun, I love the artwork but the game as a whole right now, is just OK. I'll have to wait for an update to play more. It just seemed repetitive. Hit the 3 drop targets, then hit the Cross for Multiball. Hit the snake enough times to start multiball. Hit the chair 5-6 times to start...Multiball. I couldn't score without Multiballs, but as soon as I had a game that I got 3-4 multiballs on, I raked up 90mil+ rather easily. At this time, I don't think it has the lastability of say, AC/DC. Fair game, but looks way better than it plays.
8.600/10
8 years ago
JC

one of the best

(Not Home game. +- 10 plays)
Game should be good, but i don't like the music and it's very important in this game. Even if we can choose a music at the beginning they are all quite hard ;).
Animation and art are good, multi ball are quite fun, but it's not enough to make me come back.
It's not my kind of Pinball...

Artwork is top notch. Game is fun...not my cup of tea, but absolutely a well done game...

Edit: after playing a few more times I enjoy the game, nice modes and a lot of risk/reward moves in this one. Still not a huge fan because of the theme but the layout is top notch.

BeaverBrewing edited previous rating on May 26, 2014.

Owned this machine now for a few months, really love it... I like the band so the theme works for me... Find the machine a little frustrating at times, its one of these games that you can go from a 100 million score one minute, to x10 sub 10 millions scores... Very fast and sometimes the balls drained before you even see it move :)

Look forward to the updates, hope this will make some parts of the game more useful, ie collecting the band members seems to be pointless currently...

Wizbiscuit has owned this game in the past.