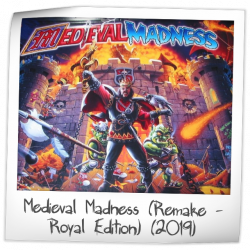 This game ranks 1st in the game group "Medieval Madness". The group itself ranks #1 in the Pinside Pinball Top 100.

The Royal Edition of Medieval Madness takes the best game ever made and makes it even better. Medieval Madness has always been my favorite pin, and even through all of the years and new games coming out (which are great), I still have a blast every single time I play this game. It's rare to find a game you don't get tired of - but this is it. The addition of a cool topper, beautiful RGB general illumination, and an awesome large color DMD just elevates the game to even greater heights. While I don't technically have a Royal Edition, I upgrade my Limited Edition with all of the extras (so pretty close) and love them. I still feel after all of the years and after many amazing pins that Medieval Madness is the greatest of all time.
10.000/10
6 days ago
CWD

I own the Royal Edition and its epic.

This game is a classic, the humor, the playability, the design, the scenic work it is absolutely perfect.

Best pinball machine during its time. Still translates in the current state of pinball.
Brian Eddy at his best.
Chicago Games knocked it out of the park.

An honest review score. Not a stacked review score from a Royal edition owner. Afm still plays better and honestly neither really lockdown the first 2 positions like they used to. Phenomenal game. Always a top 10. Doesnt need to lock in number one anymore. Let it go.
9.460/10
27 days ago
CHS

Love the original and LE.
The Royal takes it to the next level. Plays smooth and buttery. Audio is clear and crisp. Dynamic Gi lighting, topper, illuminated panel, trim finish, and cabinet construction seal the deal for me. The game is more solid, fresh, smooth, fast, yet controllable and predictable from a shooting perspective.
A shooters game all the way.

Only game that is better is Pirates by JJP

All 10 for me EXCEPT Cgc refuses to increase the volume on the voice call outs even though they’ve been shown how to do it. Boooooooo.

There is absolutely no doubt that this is the best version of MM.

I love this game. I had a LE we liked so much that we sold it and purchased a NIB MMrRE. It is awesome. I really enjoy the rule set, we are not pinball experts so this is a game we really can play the a lot of games. Lots to do on this pin, funny campy sayings, great game for the family collection.

Bought this without playing, clear why it’s number one.

Best version of my favorite pin ever, a must have!

MMRR is the best of the best!! No question about it! Have owned the Williams Original in the past and loved it. Any time a company tries to do a remake they are taking a lot of risk trying to live up to the original game. Chicago gaming has done it with all their remakes, but the Royal is in a class unto itself. The Topper, Non Ref glass, shaker and all that other jazz is super nice, but all that can be added to any game. The powder coating and interactive LED is what makes the Royal a game that will stay in its own lane for the next 10 years. All MM games are amazing, the MMR's are all great, but nothing touches the Royal to date.

Perfect Pinball 10??? I've seen many of the other games on here and played them. Its not hype as a small handful of nay-sayers might chime in later on. CGC hit this one on the head! The lighting, topper art, modern electronics, black diamond powder coating, larger color display, upgraded sound, VERY limited production #350 so we are told, etc. are all making this out to be a instant classic. Simply put, there are many cool pinball machines out there, but this one takes the cake!!!!

Medieval Madness, as represented years ago in The Pinball Arcade app, was the table that got me into pinball. My only experience playing one was in a virtual setting. A couple years after, I finally got to play the original real deal at a bowling alley and I was immediately hooked. Now I could see why this game was so popular. Of course I wanted to eventually own one, but originals were hard to come by. They are often in badly routed condition, they run 20+ year tech, and available original machines in the ideal condition are usually priced over $10,000 in the market. Enter the CGC remakes...

I got on the list for the rerun in early 2019. I was hoping CGC would eventually align the MM remakes with the greatness of the other remake models...and in 2019/2020, with the Royal and SE additions, they did exactly that!

The Royal Edition of MM is about as good as you can get in pinball. CGC really went all out on making this remake stand out over the others. Having played the original, I believe the remakes recreate the original’s features and feel very well. CGC has also added a number of enhanced features that are not available on the original game, including: modern electronics, fully adjustable color display, all LED lighting, and enhanced sound.

Chris Franchi’s interactive topper is one of the best looking toppers in pinball. The machine is decked out in black diamond powder coating all over and it looks really great. ATHYRIO GAMES created all new full-color display artwork, re-imagined within the framework of the original Williams display artwork at four times the resolution. It’s glorious looking and really breathes new life into the game.

But what else can you say about MM that hasn’t been said already? The rules are easy enough for beginners and yet challenging for experienced players alike. This game (along with AFM) are the pinball standard in what ‘flow’ shots are all about. Up until a year ago, I would have said ‘MM contains probably the BEST toy in pinball (castle)’...but that honor may now belong to 2019’s Stern’s JP...but it is really a toss-up. I have them side-by-side because they are my favorite games to play. My wife’s favorite feature is bashing the trolls that pop up every once in awhile. The sounds and call-outs are some of the best ever done, it’s quite humorous and enjoyable.

While CGC consistently takes forever to go from the game announcement to finally shipping a game, and during which time they offer almost no regular communication on production updates, especially when they repeatedly miss previously proposed production dates...when they do finally get the game in your hands...you cannot question the build quality. It’s always a premium product. The MM Royal Editions is their best effort to date.

If I had to dock points for anything: In comparison with the modern games now, it doesn’t have the deepest ruleset, the cabinet side-art is okay (not great), and the music could use a little more variation. But it’s a game from the late 90’s and a straight up comparison to modern games like Stern’s JP and JJPOTC seems really unfair. For it’s time, Medieval Madness is King of the Realm.

I have the privilege of owning the top-5 rated machines on Pinside and I can see why MM is consistently #1. MMr has that one-more-game feel and then some.

Great game! Glad they took the time to build it right. The lighting is legit, hats off to the quality and feel of the powder coat.
this is the best version by far for MMR

1
There are 17 ratings (that include a comment) on this game. Currently showing results page 1 of 1.