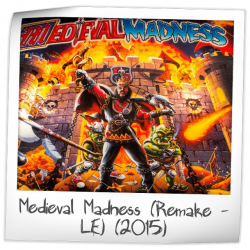 This game ranks 1st in the game group "Medieval Madness". The group itself ranks #2 in the Pinside Pinball Top 100.

There are 114 ratings (that include a comment) on this game.
Currently showing results page 1 of 5.

MMr is a renowned pinball title, but at this point I consider it more of a Collectors game than a Players. It deserves the remake treatment with modern lights and upgraded screen, as those elements were pretty dated. From a gameplay perspective, I only give it average marks. The code was great for it’s time. Compared to a modern title, it needs to be rated realistically and without the nostalgia factor.

rapidflipper has this game on the wishlist.

Timeless machine. I’ve been playing it for ever and it never gets old.

A solid game. possibly one of the best games out there. while the main objective of the game feels a little reputative (hitting the castle)the characters you are defeating are goofy enough in the audio to make it feel like a new challenge every time. The other game modes such as the trolls also give this game something very fun, and makes it feel like a paced game. the lights and theming is great and I don't think I've ever had a bad time playing this game. voice acting is obviously great too. if i had to name a con about this machine, its the price it commands.
8.835/10
69 days ago
JJD

Proven for years as one of the best ever and You should also update your review on these older titles. The classics are excellent but, they can't keep up with the new tech that makes pinball more exciting nowadays than ever. With that being said MM and MMR are absolutely a blast to play and we all know that.
Pros
FLOW for DAYS
castle of coarse
TROLLS!
call outs
art
ramps
catapult
humor!

CONS
Not too many. AS far as keeping it. Not in a small collection like mine. I have owned MM twice now and that's it. I will look forward to playing it at friends houses in the future but, for me it's the current modern games.

I had trouble with this review because I rated the original so high. My son and I played this game at Pinball Palace. We have shot 2 original 1997 games locally at Jim’s Arcade and Pinball Past time here in Vermont and one had Led upgrades and a new dot matrix. I originally thought it was a remake, but the owner told me and showed me it was an OG 1997. The 2 1997 originals we shot and played we’re exact same. Same feel, same speed and the same greatness across the board.

One of these had 10,000 plus games on it and was beat up, and the other was way newer looking so brand new that I thought it was the remake. So when I got to play this remake version I thought it would be the same old great feel. Both my son and I did not feel that way at all. It felt cheap, it did not respond as well and ever so slight changes in position of Merlin hole and ramps made me feel like it was not the same experience. The animations in color were cool but lacked the feel of the overall aura of this title.

It is still a great game! But I do not think it is a perfect and better transition like Attack from Mars. I like that games remake so much, much more.

Buy one or play this game any chance you get, I just do not think it has recaptured the original magic and game play of the Williams masterpiece.
10.000/10
3 months ago
???

Great layout shoots like butter has that one more game effect

Great game but the scoring is not balanced at all. Also, it feels very shallow compared to modern games.
8.940/10
6 months ago
SCS

Finally, addd a MMR-LE to my modest collection. The pin flows nicely, has great annimations, fun to play and always puts a smile on my face. Is it the greatest ever...for its era possibly. As technology has moved forward, the depth, annimations and gaming experience has developed, improved and surpassed MMR.

This pin is the complete package and I plan on enjoying it as much as I can. The MMR experieince is wonderful and unique for sure.

Great game and enjoy it everytime we at the pinball parlours, sometimes the games very quick with SDTM drains while others it flows nicely. castle is the best feature.
8.240/10
7 months ago
DEW

MM is a great game - fast and flowing, but not brutal. The castle is one of the best toys in pinball and the theme is a classic. On default settings, it's difficult to reach the wizard mode - so it keeps you coming back for more.

2021 Update - the ruleset would now be considered shallow compared to modern pins. Still a great title, but probably not the *best* game. Most people rated this game LONG ago and haven’t updated their rankings.

The LE and Royal are way too expensive compared to the original and standard remake.
8.140/10
7 months ago
MEG

This game as always been a great theme. The remake is just like the original. A great pinball with fun call outs and fun toys. The castle blowing up, trolls and all are make it such a fun and interactive game. It has stood the test of time and I believe will for many years to come. It plays well enough for amateurs to advanced players. The ruleset isn't very deep, but they don't need to be always.
10.000/10
11 months ago
ZAC

This is the greatest game I’ve ever played!!!

I have owned this game for approximately a year. It’s likely the most well rounded/balanced game I have played. Very approachable for anyone and challenging enough for most. Just a fun fun game!

mikewalsh has owned this game in the past.

There's a reason MM is atop most pinball lists... it is so much fun. The unofficial Monty Python's Holy Grail pinball machine. So many great toys (castle, trolls), easy to follow rules, great flow and FUN! Trying to stack all five of the multiball madness options is a game within itself.
The remake shoots and feels great. Really smooth. The upgraded DMD is fantastic and the sound, although still slightly muffled (could've been more about the location) has transferred really well.
Hopefully this gets remade again so the next gen have a chance to own this all time classic.
9.283/10
1 year ago
KMA

Some of the elements of this game get a bit dated now compared to the new games and tech that are out there now. BUT This game is simply one of the most fun pure shooters out there. It is pinball done right and deserves its top spot.
9.800/10
1 year ago
IAN

great game for first time players to advanced pin heads! one of the best games of all time , i like everything about it! very thankful this game was remade for more to enjoy

This game is great. I was glad I found one within an hours drive of me. If I could afford it, I'd own one. For me that's saying a lot because I'm partial to the newer pins of the last 10 years.

I didn't watch any videos of gameplay before playing MM. My only knowledge of it was it's rating on here and it's high praise among pinheads. There were some cool surprises like the trolls. You'd think the drawbridge and castle destruction would get old...for some reason they don't. It's a repetitive mechanic that's fun every time.

The shots felt great. I would almost compare it to Theater of Magic. Easy to make shots, but they feel fantastic when you continually nail them. I do wish the game were a tad more difficult, but I didn't spend anywhere near enough time to master the game so I shouldn't really say that.

I thought this game was way over rated. However, I had the opportunity to purchase the remake LE recently and have played it over and over since and now have fallen in love with this game. It is simple for beginner players, but yet complicated enough to challenge the better pinballers. Definitely a keeper inside my collection. I also have added the topper, full size color screen, upgraded speakers and subwoofer and color changing speaker lights. All of these improvements also adds to my love for this game.

One of the greatest games of all time made even better. Also has the all-time best topper.

Medieval Madness is my favorite game. There's a reason it's always in the top 3 of games on Pinside.

This is a game where entry level folks can play and have a great time, and more skilled players have defeating the King of Payne to shoot for. The theme is universal and the more you play, the more fun it is. Bashing the castle and the trolls never gets old for me. Can be a little unbalanced (hit the castle over and over), but along with AFM and the Shadow, this Brian Eddy pin still holds up as one of the GOAT.
9.600/10
1 year ago
CWS

MM is just plan fun. Only continual issue with the remakes in the ball hop down the lanes onto the flippers.
Next12345
There are 114 ratings (that include a comment) on this game. Currently showing results page 1 of 5.