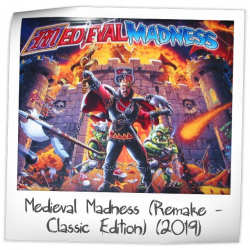 CGC faithfully recreated the original Medieval Madness and called it the Classic Edition. Everybody knows the game, and it’s a 10/10 across the board. There’s a reason it’s been at the top of the Pinside 100 forever.

The only complaint I had was the speakers CGC installed in the CE. No matter how you adjust the sound settings, the call outs were muffled and impossible to make out. As well documented in the MMR Owners thread, the only solution was to install new higher quality speakers. With the new speakers, call outs are clear. It’s a shame that CGC couldn’t reproduce the sound quality from 1997 in 2019.

Once the sound issues are fixed, it’s the best game ever. The all important “one more game” allure is always there. Pure fun!

This pin is perfect. Troll popups are hilariously fun. The callouts for everything are awesome and never get tired of them. Bashing the castle is simple yet endlessly playable. Merlin's Magic adds just the right "what will I get next" element. The remake feels different from the original, especially the castle, but plays very similar.

This is a game where entry level folks can play and have a great time, and more skilled players have defeating the King of Payne to shoot for. The theme is universal and the more you play, the more fun it is. Bashing the castle and the trolls never gets old for me. Can be a little unbalanced (hit the castle over and over), but along with AFM and the Shadow, this Brian Eddy pin still holds up as one of the GOAT.
9.444/10
11 months ago
BAH

What hasn't already been said about this game? I've only really spend time on the remake version so maybe I don't know what I'm missing. It's just fun and so smooth. Good game time length, makes you feel like a champ every time you destroy the castle or get multiball. If it wasn't so damn expensive, maybe I'd want to own it. Luckily, there's one in town that I've thrown more dollars at than I care to say.
7.530/10
1 year ago
ZUL

Many pinheads believe that Medieval Madness has it all. I think it has charm and a great sense of theater, but it is not the best pinball game ever made. Not by a long shot. MM looks and sounds fantastic, but it is not the highes end player's game that many people put it up on a pedestal for. The re-make feels like the original, plays like the original and has some updated animations.

The Pros:
Good game play and goals that are reachable, but so hard to achieve... most of the time. Always a challenge. Novice players get into it and have a great time as well. One of the few games to offer fun to all levels. The theme is executed, perfectly. Stack your hurry ups and score HUGE points. A perfect example of getting the balance right so that new players can step up to it and enjoy it enough to get hooked. Deep enough to give higher end players something to aspire to. No wonder why ops won't sell their games. This game looks and sounds fantastic.

The Cons:
In tournament mode, the unbalancing strategy is to hit the castle over and over with glancing shots for bigger scores. Strong flippers are a must for the right ramp. The price these games go for are silly expensive! This is a pinball game, not a museum piece! Out of Eddy's 3 designs... this one is the one I like the least.

The Takeaway:
Get one if you can and leave it in your will to someone who will love it as much as you do. Now I'm going to go out on a limb here... but MM is the lesser of the 3 games designed by Brian Eddy. Playing this game over and over in tourneys, bashing the castle over and over... not that there are not other things to do, there is a whole lot more to do... but points is points! Medieval Madness is a good game... but out of Brian Eddy's 3 tables, this is the least of the 3 and not what I would call a truly great game or even an "A" lister. For the entertainment offered, The Shadow and AFM are both better players. Gameplay suffers from "Bash the gate" syndrome for good scores. IMHO, this game is a top 50 game, but not anywhere near the top 10 and with absolute certainty... not #1. A perfect game for rich dudes that like to be entertained by their museum pieces. I'm sure it'll look great next to their Big Bang Bar.

Clarification:
The reason I am rating this game so low is because it is "exploitable" and has a scoring imbalance in the ruleset that takes away from the brilliant gem that this game should be. The game may look like, but it does not PLAY like a true "A" title. That is just how I feel about this deck. This is my opinion and only that. Take it for what it is.

Update:
The more and more I play this game, the more and more the unbalanced nature of the scoring becomes apparent. All that would need to happen to make a huge difference in this game is to reduce the scoring on the castle (by half? 1,2,3,4,5,10 million a pop and KOP hits to 250k, heck, a quarter of it's current value may be an even better way to do this. .5, 1, 1.5, 2, 2.5, 5= 12.5 million instead of 80!) to make this game much more balanced and bring out the rest of the layout and strategies that this game should provide to the skilled player. MYSTERY PROGRAMMER?!?!? WHERE ARE YOU?!?!? You think they could have found someone to do this for the remake. At this point, I walk by this game now, when I used to line up to play it. Scores reduced accordingly.

Ah innocence, Those were the days...

Austin, this review is in your memory.

Update #2:
I go to this game in a tourney when I am looking for a relatively easy win. After you defeat the King of Payne what do you do? Well you keep on banging on that castle for 750k a hit. This never stops for the rest of the game. That is all there is to do on this game when you are looking for the big win. Rinse and repeat up and down the middle to the win.