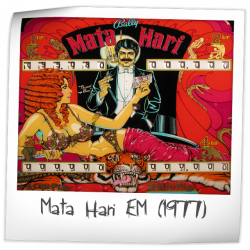 I was lucky enough to play this rare EM version at a show. Even though the same PF as the SS version, the EM was more fun. Wish there were more of these out there.
9.324/10
5 months ago
DO

I owned the EM version, the solid state version and the prototype with the polyurethane playfield (#13 of 22 made). All have been sold, the prototype going to museum in So. Calf. There is one other poly playfield out there but it is in the wrong cabinet. Great game!
6.062/10
4 years ago
DIA

If you are an EM collector is another of those "holy grail" games.

The EM Mata Hari version is a solid example of a well playing machine that has solid shots to the symmetrical playfield both in the center, left, and right sides. The key positioning of the saucer between the pop bumpers keep the ball moving, if you can score the bonus.
Yes, the game is quite simple and straightforward, that was the point in the first place!
Jim Patla was taught well by Ted Zale in terms of being to able to design a game that appeals to most, and easy to understand.
Backglass artwork is an absolute Dave Christensen paramount and the playfield and cabinet artwork is extremely complementary.
Scoring is balanced.
Although the solid state version is very common, something was lost in the translation to electronics.
Enthusiasts mix the two versions of the game up constantly, and it is highly unlikely they have ever played the EM version anyway.
Playfields on both versions are generally trashed in the center for good reason.
The game was extremely popular and played extensively, and remains so for those that appreciate classic designs.
8.757/10
9 years ago
ZUL

Mata Hari is another example of Dave Christensen's incredible visions for pinball. Jim Patla and team did a good job of bringing a straightforward and seemingly simple game a challenge.

The Pros:
The Art package. When this game has strong flippers and is waxed, it is deadly fast and requires your full attention at all times. Backhand shots are as valuable as regular ones with the drop targets.

The Cons:
The game can be a bit too simple sometimes.

The Takeaway:
Many of these games were left to disrepair and play like they are crippled or have that dead feeling when played. Get a fresh set of rubbers and tune up your flippers and get ready for a fast and exciting game.
1
There are 6 ratings (that include a comment) on this game. Currently showing results page 1 of 1.