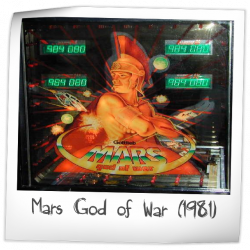 Early solid state widebodies are one of my favorite types, and Mars God of War demonstrates why: There's so much to do! Two banks of drops, a ramp that you can either travel under or catch it when it's down and ride through a clear tube Xenon style, some saucers, some standups, and four pops and four flippers. The extra flippers really add something as you'll notice when you play a lot. At first Mars seems like a pretty wicked drainer, but ah, use those top flippers to steer the descending ball into safer spots, not to mention they can hit most of the shots in the game. So many choices.

The theme is enjoyably puzzling (Romans in space? Okayyy) and the playfield art is functional, decent. The backglass isn't very exciting with the power off, but that's because it's an infinity glass setup, so you don't want to hide the lights and mirror effect behind a large drawing. Cabinet art is so-so as well. Art is the one area this game is lacking, instead of making it memorable it looks like they kind of made it quickly.

Mars God of War is an interesting table. It happens to play very well too.

The pros:
A more "traditional" widebody layout from Gottlieb that belies a challenging and relentless gameplay. Super hungry outlines in combination with a punishing multiball rule set that eliminates the stealing of ball locks and makes fully grown pinball players curl up into the fetal position and cry. Surprisingly tight shots at the top of the playfields mean that only players with good aim need apply. Going through the table hitting drops is dangerous as the angles on this game are sending the ball side to side all day long.

The cons:
This design lacks the finesse and polish of a bally or a Williams game. Even when tuned and set up properly it feels "clunky" in comparison to the competition's designs. Your flipper had better be strong or you will never make the ramp. Left outlane, burn in hell.

The takeaway:
Set this game up steep, but not so steep you can't make the ramp shot and expect to see this game in some bigger competitions soon. This game is a player when treated right. Flipper rebuilds and a fresh coat of wax will make the difference. Is it the next team one or TX Sector? Could be... It is a gottlieb!

I love this generation of games, the double backglass is just amazing.
I've played many hours on it, when I was a student and was one on the first multi-balls that I discovered.
Activating the "warbases" is always fun, love also the dark/red theme.
For sure a roman soldier has nothing to do with a spacecraft, but it don't care !

I am absolutely addicted to this game. The look at the infinity back glass with the chasing lights draws me in, and then when playing it is always the goal to lock the ball (or trip the right inline) to make the StarGate shot. The high ramp with the clear tube and chase lights is always a thrill when completed. The playfield makes playing multiball challenging, and the shots take a lot of practice to make sure to accurately be able to hit them when needed.

Pretty good sys80. It's no Black Hole, or Spirit, or Devil's Dare, but it's a close 4th best system80 in my book.
If I could hold 30 pins, it would make the cut, and be a keeper for me in my 1980's collection.
Left outlane is horrible. Big strike against this deck.
-mof

I do like the Gottlieb System 80s and this game looks cool enough but it just doesn't hold the playability with me. Its a tough game and getting it up the ramp and through the tube is a tough shot but for me it just isn't fun enough to keep me coming back, unlike Pink Panther, Volcano and to a lesser degree Black Hole. Still enjoy it once in awhile though.
9.140/10
6 years ago
WEZ

A friend let us put this game in our home. Great game in this time period. Robot voice, multi-ball, tube shot,just a solid game by Gottlieb. FUN
8.900/10
7 years ago
BWM

If raked back enough Mars: God of War is a crazy fast game. The one I've played and will be picking up this weekend is that way. It makes the ramp harder, but funnier and more exciting to make it when you do. The full 3-ball multiball is one of the most difficult to achieve in pinball history, or at least from that era. I am going to have mine set on 5-ball because I think the scoring is more even on that setting. Also on 3-ball it is almost impossible to get multiball going sometimes. I like how it will give out a smaller 2-ball multiball and as long as the ball keeps in play scoring is 2X. When in 3-ball multiball it is 3X. The one thing that gives this game a nice forgiving feel at time is the outlanes when one or two balls are locked. It will kick out one as a Last Chance Lane feature, which is nice padding in case that happens in the game.


The games background sounds are almost identical to a Williams Blackout. The ramp is also vaguely familiar to a Bally Xenon. I will say that I don't get why somebody would say it was a rip off of other games of its time. First off it is a widebody, which is pretty different on its own. Secondly, yes the shots feel sort of like a Williams Firepower, but not enough to really do any damage to the originality of the game with the candy cane loop style lock. Thirdly, it is really hard to know if the designers stole the ramp design on Mars: God of War from Xenon because the games came out so close together. I'm leaning on the side of probably not. These were both in the design phase at almost the same time. Also a possibility that on both the Williams Blackout sound and Bally Xenon ramp that they knew that either these were out or at the design level, which is when they added those features to the game.

Overall: This is a really fun game that I hope gets more attention.

My neighbor owns one. Its a decent game, I enjoy playing it. I don't want it in my collection, but am glad one is close by me. Its a widebody, so play is slower. It is challenging to hit all the shots. I give it 6 3/4 out of 10. Looks great, backglass is good. Sounds are not so good, even annoying sometimes. Not very clear because it is an early sound game.
8.045/10
7 years ago
SES

I really like this game. The backbox is beautiful with the infinity glass and the chasing lights. The cheesy sound is perfect for the time and theme. Very similar to Space Invaders, but it plays completely different. The "thumping" soundtrack is fun as well.

A fun and challenging game that appears to take elements from Xenon and Firepower. There may not be much originality here but it puts the whole package together nicely. The lighting on this game is some of my favorite of all time. The locked-ball sequence blew me away the first time I saw it but keep in mind when this game was made. The most challenging part of this game can also be the most frustrating. You lose locked balls after a drain. Because of this, 3-ball multiball is incredibly hard to get (but very rewarding if you can). Don't expect flow like a Steve Ritchie game, it's still a Gottlieb but it flows better than Black Hole or Haunted House. It's inexpensive price can deliver some serious bang-for-the-buck.

adii edited previous rating on December 25, 2013.
adii has this game on the wishlist.

This is a game that not very many people have played. It is very close to Bally Space Invaders.
3 ball multi Ball can make this game very challenging with its wide body design. The cool thing is it plays lake a Cadillac. Fun Game

A nice playing game, nothing outstanding though other than the back-glass lighting. Well worth playing and a looker.
7.214/10
9 years ago
MAK

A beautiful game!
1
There are 15 ratings (that include a comment) on this game. Currently showing results page 1 of 1.