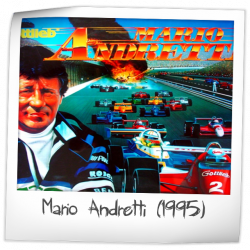 There are 16 ratings (that include a comment) on this game.
Currently showing results page 1 of 1.

After owning this game for over a year it has really grown on me. Love playing this pinball machine.
6.136/10
11 months ago
PGR

Fitting that the second to last Gottlieb was one of their worst. Bland art and clunky gameplay drag this one down. The center horseshoe and standup are very important for scoring and progressing, and it's never a very good use of the entire table when so much needs to happen front and center, nevermind how big of a drain monster it is. And those damn spinning cars! It's a pretty neat gizmo, but they're constantly in the way of your shots up the sides. There's nothing fun about that. The skill shot is also rough as you're bumping a captive ball, and it's really hard to get a finesse on that.

Because the game is a clunky, drain happy shooter, there's a lot of save type mechs from an up-post between the flippers, an outlane kickback, and generous ball save rules, but they feel like a bandaid on top of an open wound.

Let's not even talk about the art, suffice it to say it rarely got more bland in pinball history. The playfield falls under the "fine, functional" category, but the backglass is ugly.

I like most pinball tables and I don't care for this one. It's not as bad as some of those sparse early '70s EMs, but for the SS era, it's underwhelming across the board.

I grew up around Indianapolis speedway and am a fan of Mario and Michael andretti so the theme is perfect for my gameroom. I love everything about this pin- light show, attract and gameplay sounds, gameplay is fast, and the playfield art. My only complaint is the pop bumpers at the top of playfield are rarely used which is a shame because the sound when hit is awesome. Great pin and perfect price.
8.432/10
1 year ago
JRS

Very fast game, seems like a very good entry level dmd. Mario looks like Mario, I’m not sure what people were expecting. Maybe more interesting if you’re into cars.

Backglass... not the best but its better then some of the goofy ones gottlieb had in the 80s. If your a car guy you will love this pin, Sounds like a hot rod starting up when you start a new game. I personally like it better than barbwire,911 and Teed Off. I love how the rules are set up to make you feel like you are racing and competing. They are not the deepest but i dont always feel like playing a pin with a deep rule set. I thought i would hate the spinning cars but i actually dont pay much attention to them during a game. Overall i think this is a great entry level DMD machine, not all of us can afford a top 100 machine and its pretty much an average DMD game. I feel like premier gottlieb was about 5-10 years behind everyone else making pins at the time, if you compare it to somthing made 5 years earlier its not such a bad game. It just isn't in the same league as Bally/Williams who where firing on all cylinders around that time with Attack from Mars, Scared Stiff etc... But its still fun!

Frostbite edited previous rating on August 18, 2020.
Frostbite has owned this game in the past.

My rating of this game doesn't quite do justice to my opinion of it. It's a kind of middle-of-the-road (pun intended) table, but it is a lot of fun. I remember playing this table for large stretches on a vacation in New Hampshire. It was in my hotel right next to Street Fighter II, and I had a hard time deciding which one would get the next quarter.

I really like this game. I enjoy it's little quirks, like the pop-up ball save between the flippers and the skill involved with launching the ball to choose a jackpot, lock ball, or strategy. It's not super involved, the cars can be a little hard to hit, and the hairpin loop sometimes drains your ball, but I think it's pretty fun.
6.072/10
4 years ago
OLO

Any pinball is good pinball, but this one tested that notion for me. Frustrating that hitting the spinning race car mechanism would sometimes send it back down the middle for a drain.
7.335/10
7 years ago
NAT

As others have said the game play is very fast.
It requires some adjustments to fine tune the game play as the factory settings are almost all set to very easy. With the factory settings, the game is far too easy.
It is not a deep pinball game and if you are not a racing fan it may not hold your interest.
The loud noises and bright lights along with the ease of game play make this the favorite in my collection for the younger or inexperienced pinball players.
Pros: very fast outer loop and hairpin loop, good lights and sounds, many different shots.
Cons: Unbalanced scoring, some players may not like the random play with the spinning cars.
Worth a try if you can find one to play.

1/2 billion from hidden feature makes scoring unbalanced. Not too bad execution of the theme. Fun in small doses but gets boring pretty fast.

Doesn't Mario look like Jackie Chan in that backglass? Fooled me and many others :-)

flipperilaakso has owned this game in the past.

Mario Andretti is a game that is somewhere between the top of the line games that Gottleib made and their street series.

The Pros:
This game is FAST. The right orbit to the left flipper can make even the twitchiest reflex player pay attention to what is happening on the PF. The car heli-spinner is a really cool randomizer that is well integrated with "Spin the cars around" mode. Jon Norris loop shots make the most of PF space. The hairpin turn splits the middle of the PF in half and makes you consider your shots carefully.

The Cons:
Not the deepest ruleset. The art package on the BG in particular is ugly. Mario looks like he's made out of orange clay.

The Takeaway:
Take away the crummy BG art and sounds and you will find a really good good skills game. It's fun and if you can pick it up cheap... give it a spin (holds head in shame for the awful pun). One of the better racing themed pinball games out there actually. Indy.5k is head and shoulders above this game though.

I had low expectations of this pin due to the poor ratings, but it is smoking fast and very fun. Playfield layout is unique and the spinning cars are cool.

GoneFishinLvMsg has owned this game in the past.

Gottlieb has interesting pinballs, but this not... playfield very poor
1
There are 16 ratings (that include a comment) on this game. Currently showing results page 1 of 1.