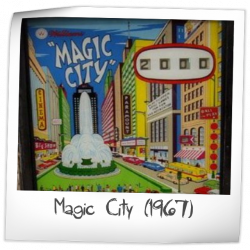 The center pop bumper makes this game! It's a whole new strategy to try to wait for the bumper before hitting the ball with the flipper or to wait for it to pop back out. The overall goal of the game, lighting MAGIC*CITY is great! I especially like the optional special you can lite if you hit the roll over or center target on *. Hard game to play, which makes it fun long term.

Beautiful but boring after a while. Don’t
like the pop bumper placement.

Mrg50 has owned this game in the past.

The center pop bumper is a great feature, changing the amount of patience used before activating the flippers. The wide open playfield makes for long shots, which are hard to reach without strong flippers and proper setup. The integration of back glass art and playfield art are about as good as a game gets.

A truly stunning game to look at. The theme and art are superb, as is the lighting. Initially, it seems like a great player with some good rules. The more I played it, the more I realised there just isn't that much needed to achieve the goals. I normally like simple rules, as long as they're not easy to achieve. For some reason, this got a bit boring after a few games. Having to drain a ball to win a special is another negative. I never got bored at looking at it, it was in another league for cosmetic design, compared to my wedge heads. The lighting is just so much more, as are the colours. I have Cross Town and Hurdy Gurdy from the same period, but MC looks like it was designed a generation later, so good is the whole appearance. I sold mine after a while. If I had spare room, I'd have another, but when space is at a premium, there are better candidates for it.

nick-the-greek has owned this game in the past.

Playing my Magic City today I realised that it is one of the prettiest looking games of all time. The artwork on that glass could comfortably sit along side classic modern paintings in an art gallery. George Molentin nailed it with this piece. The game is different, light the words Magic City and try to hit the random star on the centre target or top rollover button to light all specials. The craziest flipper arrangement with a pop bumper in the middle leads to some bizarre rebounds and wild saves.
My game is set with the back legs at their highest on 3" levellers and the front at their lowest. Enhancing the top three bumpers with bridge rectifiers makes for one very fast game.
Even my wife likes this game so that is really saying something. I have added LEDs in the back board and have also added about 8 or 9 extra bulbs to this loom, because the glass has areas on it to allow for lights to shine through but the cheap skate accountants at Williams didn't put in a full compliment of bulb holders in the back board. You can light up 'Paramount', 'Cinema', the 'ball in play' wording and even 'Wiliams' on the top left hand corner. My fountain has 4 changing coloured LEDs behind it. This really adds to the majestic beauty of this game. A brilliant design from Norm Clark adds to the overall appeal.

BallyWizard edited previous rating on July 07, 2013.
BallyWizard has owned this game in the past.

The Pros:
George Molentin killed it on this art package. The amount of detail on this PF and BG is amazing. Anyone who can sneak in phallic imagery into a BG as well as this one did is a genius (don't look at the fountain!). Gameplay is super fast and bouncy.

The Cons:
You have to get used to the wide space between the flippers and your center pop bumper better be tuned to go off at the slightest touch.

The Takeaway:
A great playing game that requires excellent nudging and opportunistic playing skills. This deck needs fresh rubbers, tuned pop bumpers, and a good coat of wax to play as it should. but when it does... it's so choice. I know this is a Williams game, but it feels like a Gottleib to me. Not that this is a bad thing, it's just the way it is.
1
There are 6 ratings (that include a comment) on this game. Currently showing results page 1 of 1.