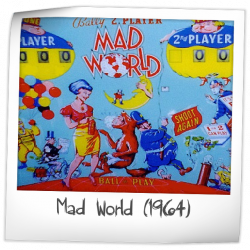 A fun game! Took me awhile to get one and I was happy when I did.

Artwork is the best for this game! Great design and theme (Did they really rip off "It's a Mad, Mad, Mad, Mad World" movie?)

Ladder on the right side is fun. Watching the ball decend down the side is something to work for.

The artwork is whacky, and is in a style that says "early 60's over the top comedy" reminiscent of its two inspirations, the movie "It's a Mad, Mad, Mad, Mad World" and Mad Magazine. But of more interest to players and collectors will be the multiball/extra ball/add a ball feature, which requires completing a progressive series of steps. The locked ball is fed down a "slide" parallel to the plunger lane via a gate which is opened either via a plunger skill shot or a left-"orbit" style shot over a rollover. The locked ball is then fed progressively down three steps by hitting two out of three lower playfield features - two mushroom bumpers and a right mini-orbit rollover. The final release scores 100 points (a lot on this machine) and allows the player to have a multiball or effectively an extra ball. This locked ball can be "stolen" in two player games, a feature touted in contemporary advertising for the game. Mid-playfield there are three pop bumpers which are worth ten points each. There's no bonus feature, so much of the strategy surrounds the sequence of shots for the locked ball.

It's a strong example of the kind of innovation Ted Zale was allowed to put into Bally machines of the era, where virtually every machine he designed had a unique, new mechanical feature of some sort. As an early Art Stenholm, it also features the strange comic caricatures that are a distinctive feature of his games.

Mad World is a game that makes sure that you play it a bit before it shows itself to you. The trick is... you have to really work it for it to shine.

The Pros: A true skill shot from the plunge and an ingenious lock mechanism that makes what you do on this table matter. I didn't "get" this table until I realized I could lock more than one ball in the free ball gate lane. Now the game feeds the balls back to the shooter lane, but you can also choose to play this game in a multiball manner. Considering that the yellow mushroom targets advance the balls in the free ball lane, you can have 4-5 balls on the pf at once! Wacky artwork from Art Steinholm compliments the creativity of Master Zale on this table quite nicely!

The Cons:
The mechs seemed "soft" to me. Hi-tap this table to get more out of it! This game can be boring if not maintained properly.

The Takeaway:
A simple game with a really cool novelty/gimmick on it. It may take some time and work to get it, but once you do, it's awesome!