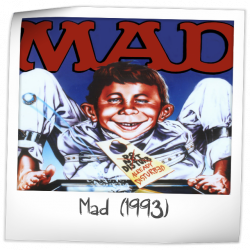 MAD was never produced past a whitewood, never programmed amd only translites and the "Rudy" head exist. Joe Kaminkow stated at the Chicago Expo 2012 that Gary Stern did not produce this game over his own concerns that it wouldn't sell in the German market. No further explanation was given.