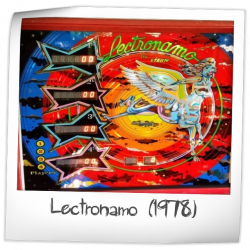 This game has received 11 approved Pinsider ratings. 14 more approved ratings are needed to get a rating and for it to be eligible for the Pinside Pinball Top 100 ranking.

Let's address the elephant in the room first. This is a Stern game with the SB-100 sound board, and the earliest variant at that. The sound as originally installed in this game is among the worst in all of pinball. Not much more than a series of high pitched beeps, counting off similar to EM chimes based on the points scored. You will tire of it. Quickly. It can be improved by modifying it to the later SB-100 tones, which is almost mandatory, but that only helps a bit. Truth is, take away the sound issues and the game improves dramatically.... but I weight the sound heavily in how I feel about games. So this probably drags the score down more than is deserved. But there's no softening the blow, the sound on this game is absolutely terrible.

However, gameplay is decent, if simple. It essentially plays like a slightly juiced up EM game. Simple and accessible, but it also has the typical early Stern drop target banks. Meaning they're in odd locations that aren't clean to hit. The left kick lane is kinda neat, but really nothing that stands out to me on this playfield either positive or negative. Very neutral kind of feel but can get a bit quick. The spinner shot would be pretty satisfying if there was some kind of better sound or other reaction to it. It's a nice shot but noting really gives it any flair. Like I said, plays ok but nothing to rave about, but nothing to really complain about either. Decent for the transition era just coming out of EM design theory. Some decent strategy to involve too, and being able to collect the bonus mid-ball is actually kinda cool. Over time it continues to grow on me from a play standpoint.

Playfield artwork is, well, theme-less. Some pretty colors in nice patterns that represent nothing..... except a giant arrow pointing at the spinner shot. I mean, it looks pleasant enough but reminds me of the kind of bland artwork you'd hang in an office elevator, or on a generic 1980's arcade cab. Like the gameplay, it's there, it won't upset you, but 10 minutes later you'll probably not even remember what it looks like other than remembering it had a generic but pleasing look.

Cabinet is about on-par with the playfield. It's there. Nothing really stands out either positive or negative, but it does meld well with the overall theme. Pretty much average for the era of stenciled 2-3 color cabinet artwork, and it is game specific.

Then we get to the backglass. I believe this was the first chrome nude backglass designs from old Stern. The nude pegasus/centaur woman artwork is just odd. Otherwise all I can really say is that the color pallet is consistent across the machine. Ironic to think that in just a couple years Stern would bring us Viper, which is my all-time favorite backglass. With Lectronamo they got off to a poor start.

So for a quick summary.... Everything on this game is very generic, there's no overall 'theme' to anything. The best way to describe things is to simply say it's a pinball machine that does play decently for its era, but you'll probably forget it all in about 20 minutes. You won't hate it, you won't love it, it happened, and then it ended. Except your ears are bleeding and you have an image of chrome horse-boobs burned into your retinas.

HHaase edited previous rating on October 07, 2019.
HHaase has owned this game in the past.

This is my first machine. Loved it since the first time I played it. All shots are situational valuable. Great for working on tap passes alley passes drop catches and dead flips. Always gets my adrenaline going when the bonus and bonus multiplier gets high.

Super cool back glass. If I had the room I would buy it for the back glass alone. The game is pretty average for its time period. Collect bonus enough to light the spinner and then go for the big points by hitting the spinner repeatedly.
6.202/10
4 years ago
MAX

A decent game that doesn't show up frequently. This was Stern's first title with electronic sound, and it shows. Some of the sounds are fun, but they wear on the ears quickly.

Playfield layout is average. It's got a fun shot through the spinner that, when hit strongly enough, ideally steers the ball right around into the left inlane. Bonus multiplier drop targets are difficult to hit without risking a drain, the the bonus collection lane at the right really slows down the gameplay.

Overall, this game is a below average player. It's only value is in the very unique artwork.

mbaumle has owned this game in the past.

Lectronamo is a very straightforward table that plays... ok.

The Pros:
A strong art package that catches your eye and tells you where you need to put the ball. Quicksilver Pegasus Centaur girl is very nice. It looks like she wears lipstick. Great placement of drops to keep you aiming straight. Drops and spinner with a bonus collect. A great Stern v1 combination.

The Cons:
Becomes a 1 shot game to the left kicker after droppin' the targets on the right hand side of the PF a few times. The spinner is the feed to your bonus and your drops on the right are your bonus x, but the left kicker is where it's at for your points. Gameplay gets old quick. A super wide lane with the spinner sucks up any shot from the left flipper. Collecting bonus is luck or an indirect shot from the left pop to the bonus lane.

The Takeaway:
A fun game for most people to enjoy. Unless it is set up PAPA nasty, players may have to look elsewhere.

Uppdate:
Like many other sterns of this vintage (v1). The special can be set to score 100k. This changes your strategy to shooting the 5 angled drops at the top of the PF as compared to boosting your bonus x and collecting from the left kicker. However if you get the bonus ladder up to 10k, the spinner lights for 1k a spin. If your spinner likes to spin this becomes a priority shot from the right flipper if backhand shots to the top drops are not something you are comfortable with. Yes, you can still just shoot for the 5 drops all day long, but the game balances itself out quite a bit with more long shots to hit across the entire table. Scores upgraded accordingly. Mike Kubin does it again.

Update v2:
After playing this game a bit more, the upper left hand drops are all that is really worth going for in this game. Not that this is a bad thing, but it is the only thing worth doing on this deck for big points. Get the drops to 100k after three sets of drops and nothing else matters. Backhand from the left and all 5 drops can be hit from the right flipper. Gameplay and other scores are reduced in accordance.

This pin is from a different time frame than what I remember. I believe this was the first Stern with electronic sound? It plays smooth and believe it or not, the flow isn't too bad. I acquired it for a very fair price and have enjoyed playing it. I like it for what it is, but I wouldn't be too stoked if it was my only choice.

bluedntattood has owned this game in the past.