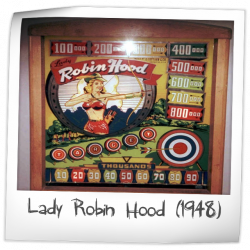 What a pretty game. Lady Robin Hood is my favorite of the fairy tale series - the first 7 Gottlieb games with flippers. None of these show up very often, but since Lady Robin Hood had almost as big a production run as Humpty Dumpty, but lacks its historical desirability as the first flipper game, you'll see this one for sale more often.

Let's get the negative stuff out of the way. There's only one kickout hole here and I'm guessing that wasn't a popular decision since the next several games all had at least two. The backglass animation - the target on the backglass blinks several times, along with the target bumper, when the bumper is hit - is simply not as fun as watching Humpty Dumpty fall or seeing the Jack 'N Jill rhyme spelled out. And this isn't necessarily negative, but you'd think that kickout hole would be easy to reach with the way the rubbers point right to it. Nope, the ball loves to just miss it. You'll need nice springy rubbers at the bottom too to get another chance.

The game is a nostalgic blast to play overall. Spell T-A-R-G-E-T to light the kickout hole for special. The letters can be hit in any order and it seems you'll always be just one or two away, making this quite addictive. A random playfield special occasionally appears at either "A" or "R" also. And achieving specials by score seems to have just the right difficulty.

This is a gorgeous piece that belongs in a nice living room more than an arcade. And it's a fun step back in time. As with Humpty Dumpty I'm rating this based on its time period rather than today, but again I'd rather play this than most newer games.

One last observation: the game here came with the original 1 1/8" balls. You wouldn't think there would be much of a difference between those and the regular 1 1/16" ones but there sure is. The larger balls play like lead weights and it's easy to see why Gottlieb made the switch.

*Wife approval* "I love it! It's so fun!" The woodrails seem to have a fan in this young lady.

Lady Robin Hood was made in the 40's. This rating takes that into account.

The Pros:
I love those Amazons that adorn this PF and BG. Nudging skills are a must. I finally get it... Roy Parker is the MAN! I haven't played too many Harry Mabs games. This was a fantastic re-introduction for me.

The Cons:
Time has taken its toll on games like these. I'm afraid that when I nudge the game I'm gonna break it... HA! Most copies of this game are in landfills or private collections.

The Takeaway:
A great looking game that came out of the pin-time capsule. With decks like this, their play has to be put in perspective to understand and appreciate it. My hope is that games like this will give pinheads a greater awareness of the evolution of the brilliant game of pinball. Find one if you can (PHoF for me! Thanks Team Arnold!!!) and play a game or five.
1
There are 2 ratings (that include a comment) on this game. Currently showing results page 1 of 1.