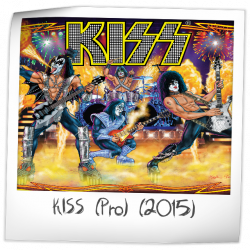 This game ranks 2nd in the game group "KISS". The group itself ranks #55 in the Pinside Pinball Top 100.

Note! There are multiple versions of this game!
This is "KISS (Pro)".
The other version is: KISS (Premium/LE)

There are 97 ratings (that include a comment) on this game.
Currently showing results page 2 of 4.

First I think many of the early poor ratings of this game is due to bad early code, dislike for the band and the difficulty of the game it self. I believe many players want to put up big scores with little challenge. Shots are tight except for the center ramp. The game is a beast challenging you at each mode but it clearly defines what needs to be done. That is what makes for a long lasting challenging game that taunts you to keep coming back to complete that next mode or multiball. If you want something simple to put up big scores get something else. If you look at Pinball and want a challenge Kiss is a game for you.

I have wanted this game for awhile but was leery of the code talk. I pulled the trigger and Santa came through! Kiss saves Christmas once again! Anyway if you like or love Kiss you will like or love this game. If you hate Kiss than this game is not for you. I'm a big Kiss fan so I love it! However standing on its on is still good but I don't know if it would go in the home collection. It's a lot deeper than I thought it would be. Lots of things to do and shoot for. I have Metallica and theirs more to do than Metallica. Overall I would give Kiss an 8.5/10 and Metallica a 9/10. I hope that helps make your decision if your on the fence about owning it like I was since it came out. (Re-adjusted on April 3rd and I just love this game! I sold Metallica and kept Kiss!

Got the game thinking code was going to stink. It is a real blast to play. With finishing touches this could be another TWD. Game looks awesome and hearing old KISS songs hearkens back to my teenage days. Buy one, mod it, enjoy.

Jodester has owned this game in the past.

I approached this game with a fair amount of skepticism. But after several dozen plays, it's growing on me steadily. I admit to some bias for the theme; I haven't really been a KISS fan since I was a kid, but the nostalgia factor, the music, and the band member personalities are a lot of fun.

The songs available in the game are the right ones, in my opinion. Interestingly, unlike AC/DC for instance, the concepts of the band's songs aren't translated into playfield features. Instead, the songs get DMD animations based on the song concept, and the specialized animations play when you hit the necessary shots to complete the song. (Like in Aerosmith.) Meanwhile, the playfield features are based on the band members' characters and the concept of the KISS ARMY -- an approach that really isn't as good of an option (if at all) for bands like AC/DC and Aerosmith. I think this setup is well executed for this game.
8.876/10
3 years ago
AK

Kiss is a fun game it has great artwork, good sounds, and Cool toys.

KISS Pro is themed very well . Hard shots but great sound and decent game play .I own the KISS LE but KISS pro would be a great pinball to own if you are looking for a music pin Addicting

I think this game is very underrated. The shots and flow and are great. It kind of feels like a Steve Richie game with regards to the flow. Great for a quick game. I own an acdc pro and would consider it close to as good. Acdc n my opinion has more character but the shots on kiss are just as or possibly more satisfying. There has been a lot of negative comments about the code but I disagree. I tend to prefer games that aren't very difficult to figure out, Kiss qualifies. Also, they are still working on a final code update. The couple negative thing I have to say is it wouldn't hurt to have a couple more toys and dots are a little bland. If you're interested in a game with great shots, flow, and theme this is a great choice.

Fun game. Great art. Could use a few more songs. Gene's head shoots the ball sdtm too often though. Otherwise wise it is a fun game
8.316/10
4 years ago
UBB

Great looking game! I've been a Kiss fan for a long time and I had an opportunity to buy a discounted new one so I did. Great music but not a deep game but still fun.

ubpin edited previous rating on July 25, 2017.
ubpin has owned this game in the past.

I played this after Aerosmith and started to notice similarities. I had not read much about these two pins, but they are very similar in layout. I liked Aerosmith a lot better. While KISS was fun it didn't hold me.
5.808/10
4 years ago
MIK

I'm not a fan of the music, being a bit younger than most pinball players

The layout is very simple with not a whole lot going on. The lack of complete code means a bit is still missing from the game.
I'm not a big fan of this machine and stripped down stern pros in general. It's a big miss.

Yet another boring ass Stern...

I love the band. I wanted to love this game, but I just don't. I actually really disliked it at first, but it grew on me a bit. Have played it a ton on location. I love the music and call outs. Hitting the ball in Gene's mouth is fun, but it's just lacking something. The back glass art, in my opinion, could have been done better. If you look at Paul's face it is kinda drooping. The play field is ok, but a couple of shots that need to be made are harder than they should be. Still torn, but probably won't love it. I would recommend playing on location, but owning it is another thing.
3.695/10
4 years ago
???

It is one of six pinballs at a local, easily the least played. Didn't like the lay out and art theme of entire machine. I like Kiss, but overall gameplay wasn't appealing.

gave it a highscore only because of the music..a different feel..a crowd pleaser
5.503/10
4 years ago
ROB

Ugh yet another Stern pro that feels cheap and bare....this and GOT pro are very poor pins.

Wanted to like it as i love the music but just found it boring and walked away with a ball to play in the end.
6.165/10
4 years ago
SGC

I hate Kiss, so it gets low points for that, plus the playfield art isn't the greatest. Stern really cheapened their quality. This game also doesn't count because it's a pro, therefore it's not the full game. It's 1/2 a game, stripped of extra options, since they made 1/2 effort for full price, they're getting 1/2 my appreciation on this one and all other pros.

Rock n roll all night. The classic is a classic, but this new KISS can be addicting. I think it's the awesome songs that keep me glued to this machine when I find one to pluck money into. Maybe one day I will find a premium to play.

ubafan has this game on the wishlist.

I have tried to play this game a few different times and different locations. I just don't like it, it does nothing for me.
7.727/10
5 years ago
ZH

Cool game to play on location. Not sure if it would offer a lot if you owned it. Animations are cool. It plays fast and is a great theme. But you sort of wonder why it didn't have more songs on it. I would say it need a little but more in the game play depth area. I know everyone love Meticalla, but I sort of like this better.

The art and playfield are awesome. I have not seen the premium version.

zaki has this game on the wishlist.

Fun Pin, great flow, great soundtrack, awesome artwork, I always play when ever i find one. cant wait to add to my collection.

Arcadegamer edited previous rating on April 09, 2018.
Arcadegamer has this game on the wishlist.

I've been frequenting a couple arcades in my area that have at least 14 of the Pinside top 50. I keep coming back to KISS. It is flat out fun to play. The flow is great. The layout is clean and the ramps easy to nail - except for the right ramp which can be a challenge. Here is what I like... it makes sense. The rules are deep enough but the basic modes are very straight forward.

I grew up in the KISS era but never really liked the band much. However, I find myself rocking out to the mode songs. It's just a blast to play. The theme blends well with the art and layout. The backstage pass is fun to get. I like getting up into the STAR chamber, the super bumpers are great fun to hit, the light show kicks it, and the instruments are fun to collect. I don't understand the Cities thing...seems to be an unimplemented rule set. The demon head is fun to hit and although it drains sometimes it does have a ball save protects you from the SDTM return.

UPDATE 12/22/18 - changed rating of this game based on code release 1.41. Modes have greatly improved, 15 city combos were added and information displays and animations have improved.

konjurer edited previous rating on July 17, 2019.
konjurer has owned this game in the past.

I really enjoyed sound track pick from Kiss discography, but did not really like the playfield and the toys. Anyway, it is a quite good game to play in the amusement shops, although I would not buy it for home use.
PreviousNext1234
There are 97 ratings (that include a comment) on this game. Currently showing results page 2 of 4.