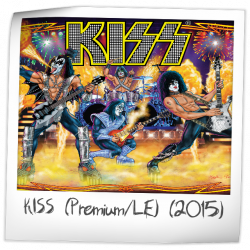 This game ranks 1st in the game group "KISS". The group itself ranks #56 in the Pinside Pinball Top 100.

Note! There are multiple versions of this game!
This is "KISS (Premium/LE)".
The other version is: KISS (Pro) (regular version)

There are 80 ratings (that include a comment) on this game.
Currently showing results page 4 of 4.

Not since Metallica have I actually been impressed by the playfield artwork. Kevin O'Connor really did an awesome job giving us classic, hand-drawn visuals. The rest of the art package (translite & cabinet) are just okay. If I had to nitpick, I'd say that the speaker panel decal in particular could have been better if it were done in different colors on each version to better match that version's color scheme, but whatever.

Since Stern has switched over to the SPIKE system, I feel that the overall sound quality has improved significantly, and that works in Kiss's favor since it's a music pin. I was never a Kiss fan, but I got to admit that some of these songs got me crackin' open a dad beer & singing along with my own parody lyrics in no time! =)

Kudos to Stern for getting Gene Simmons & Paul Stanley to do custom voiceover work. I just wish that there were more of a variety of callouts as they seem pretty repetitive once you put some time on the game.

Within each multiball, the color-changing GI really makes an impact. It's immersive & very cool. For "Demon Multiball", all GI goes red, and for "Starchild Multiball", you get an all pinkish/light purple GI. The experience definitely puts you in a different world until you're back to single-ball play.

The layout is decent fun to shoot with a nice mixture of easy, challenging, and dangerous shots. The rules could still use some updating, although they're pretty much the "meh" rules that I expect with Lonnie leading the code team. I really do wish your choice of city at the beginning of the game had a greater significance other than triggering callouts of Gene & Paul saying that city's name. Perhaps this might be addressed in future updates? We'll see. But yeah. Lonnie.

The spinning disc under Gene's head will screw you, often by throwing the ball SDTM or towards the outlanes, so I tend to avoid it when the ball saver is off, unless it's lit for something that I really want. The same goes for the green "Lock" targets, with the right "Lock" target being especially tough to hit given that it's partially blocked by the post for the right ramp.

With the center ramp shot being such a gimme, I appreciate the fact that Borg made right ramp such a tight, challenging shot. It can be especially frustrating when that's the only shot you need to complete a mode or to start "Love Gun Multiball".

I like what Borg did with the "Mode Start" scoop hole. It appears to be turned a small degree off so that it is not a perfectly dead-on easy back-hand shot from the left flipper. If you're an idiot like me & put a Cliffy protector on the scoop, it will make the shot even harder! Get ready to punch some holes in the wall. =)

The toys & gimmicks are probably the weakest point of this game. The Gene head's addiitonal LE/Premium feature uses his additional ball trough to collect & then spit all of the balls back at you during the start of "Demon Multiball". The twitching Paul Stanley toy above the "Starchild" area is pretty much a joke that has no interaction whatsoever with the ball or its shots.

Pros: Sound/Music, Artwork, Flow/Game Play, Lighting, 4 Pop-Bumpers, and DMD Animation are the finest I've ever seen. It has been a few days now and I cannot stop playing it. While I could use a few more playfield gimmicks (toys), I must admit that this back-to-basics, 2-flipper, open, and well lit playfield is refreshing. Well done Stern!

Cons: A little more imagination on the Gene Simmons head would have helped. For example, the eyes could have been implemented with RED LEDs. The tongue could have been implemented with movement and perhaps embedded lighting. Why plain yellow flippers? How about tongue shaped flippers? I love the music, so much so that it bothers me when it is muted at the end of every ball just to make a plain KISS ARMY sound. I would prefer the music to play at a constant volume throughout the entire game. Default settings for Starchild should be Easy as Medium is in fact very hard. I wish Starchild moved more…too stiff…another missed opportunity. The word KISS in the back glass should have crafted with LEDs to pinhole light each letter as the drop-targets are hit.

All in all, a great pinball machine with fantastic flow that is just a few mods (gimmicks) away from a perfect 10.

UPDATE: Latest version has made the game more addicting. Some really cool mods now available. I cannot get enough of it.

KISS is a theatrical theme and Giant Gene head swallowing and spitting out balls is a great gimmick.

Previous1234
There are 80 ratings (that include a comment) on this game. Currently showing results page 4 of 4.