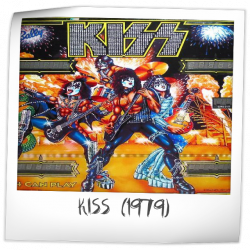 KISS, a Bally produced licensed game featuring the self proclaimed “Greatest Band in the World!”was released in 1979 and featured all four original members of KISS. The artwork features the band in their 1977 “Love Gun” era costumes, although the group had changed their look dramatically by the time the game launched. The side cabinet portraits somewhat resemble the individual solo album covers that were released in 1978.

The game contains 2 flippers, 4 pop-bumpers that alternate +100 and +1000 points, 2 sling shots, a 4 target drop target bank, 8 stand up targets, and a 4x4 grid of lights where you must complete the rows. Complete 4 rows a second time to get Super Bonus. Complete a third time to get Colossal bonus.

The AS-2518-50 sound board plays “Rock and Roll all Night” notes for the game start tune and “Shout it out Loud” notes for the game end tune. Overall, the setup is similar to earlier mechanical chime machines where a sound is played for incrementing the +10, +100 or +1000 points. This sound board is identical to that on other Bally machines - the MPU sends the note sequences.

A different backglass and playfield was released for the German market which features rounded S’s instead of lightning bolt S’s in the KISS names.

A total of 17,000 KISS machines were produced by Bally. This was the second highest production volume of the first generation Bally electronic sound pinball machines. That was over 1000 less than #1 Playboy and just a few hundred more than #3 Star Trek.

11 wooden cabinet prototypes were made. 3 exist while the other 8 were destroyed by Bally. The prototypes feature a larger Intel 8035 powered MPU board with a keypad in the lower right corner. They have an AY-3-8910 3-voice programmable sound generator sound chip on the MPU board. This setup produces different sounds than the production KISS machines. The AY-3-9810 was on the Bally AS-2518-51 and AS-2518-56 “Sounds Plus” next generation sound boards. These 11 KISS prototype machines did not have speech. They did have blue fluorescent displays.

1 white fiberglass cabinet machine was built after KISS was in production. This machine was specifically built with a special one-off speech board set to compete with the production release of Williams Gorgar at the 1979 AMOA show in Chicago. The sound board set contained 3 boards of PROMs and a D/A which crudely said “KISS” and “Shoot the K” when a KISS line was spelt out. It was also rumored to say “Too much Rock and Roll” when tilted. The sounds may have simply been triggered from the Target Reset and Tilt relays. The backglass was custom two-thirds size. It is unknown if this machine still exists. 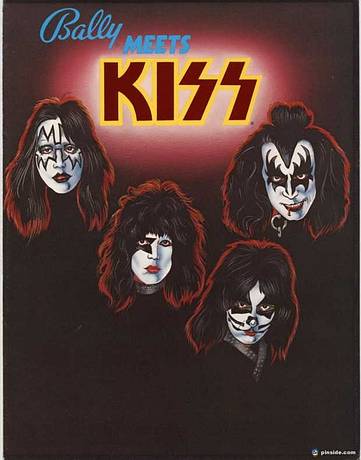 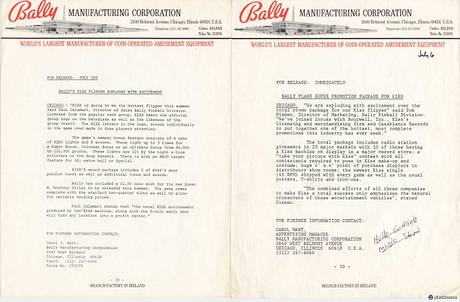 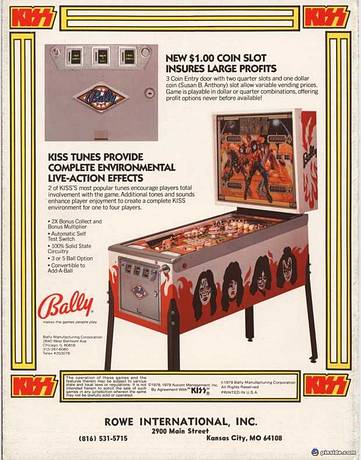 This game has received 102 approved Pinsider ratings and currently has a rating of 7.052 out of 10.

There are 47 rating comments for this game.

346 Pinsiders have this game in their collections.

200 Pinsiders have this game on their wishlist.

55 public locations known where you can play this machine.

We have seen this game for sale in the Pinside Market 99 times. The median asking price is $3,800

There are 724 forum topics linked to this game, 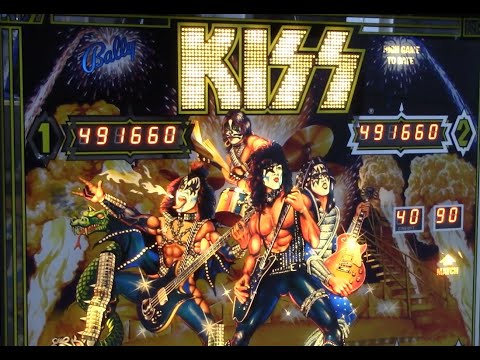