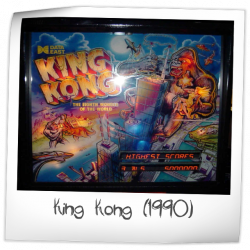 This game has received 2 approved Pinsider ratings. 23 more approved ratings are needed to get a rating and for it to be eligible for the Pinside Pinball Top 100 ranking.

I only got to play this a couple of times before it quit working, and I sold it before it was ever fixed. So it's difficult for me to really rate the game play in much detail. The artwork is great, both on the playfield and the backglass. If you are looking for a fun game to play, this is very much mediocre. If you are a collector, it's highly collectable and worth having, if that's one of the reasons you're into pinball.

Dooskie has owned this game in the past.

Okay! So I guess I'm one of the only people who have played this game and taken the time to rate it. I'll do my best for ya. ;)

LONG STORY SHORT: It's really a shame that this game didn't get made. It really did have some amazing potential!

LONG STORY: This game was never released, but exists in the form of 9 prototypes. Here's the tricky part: each of the prototypes are a little different from one another, so depending on which version you play, you might have a completely different playing game. For example, at least 1 of the prototypes used the larger "Kong" flippers on the bottom of the playfield; another has an upkicker in the spot where others have a ramp. So which version am I rating? Today I was honored to play several games on prototype #9 of 9, which means that it is the most current version they made (i.e.: closest to market).

Overall, the theme is BOSS. This game is a standard non-DMD Data East game (alphanumeric), which means that it was released before the King Kong movie remake, which may be why the game wasn't released (not a popular license at the time). The backglass is killer, the artwork gorgeous (way to go K'OC!), and the sounds superb (way to go Brian Schmidt!). As is typical with most Data East games, the stereo separation is fantastic and the musical score is really good!

The game has 3 flippers: 2 regular ones at the bottom and an oversized "Kong" flipper top-right. There's a skill shot that is very similar to Whirlwind in that you're trying to hit the target that's flashing on the left. The rules were VERY close to being finished, but definitely needed some final tweaking. Same with the layout: there are several places on the playfield where the ball slows too much, or gets stuck, or the shot just doesn't feel quite right. For instance, the ramp at the back of the game has a brutally steep incline...too steep.

The slings have Kong on them that react in the same way that Elvira and the Party Monsters do. Probably the coolest thing about the game though is that when you smack the ball up the ramp, it locks into a cannon (remember this is pre-T2) that you shoot at just the right time to lock King Kong in a cage on the other side of the playfield! Very cool feature that must be timed right for the maximum bonus score.

Overall, it's not the deepest game but really should have been finished! I mean, they were SOOOO close. The game I played was purchased from Mike Pacak for around $4500 (definitely a steal of a deal). How Mike got the game, I'll never know, but apparently he was selling a few of them at the time. If you get the chance to play the game, give it a go. It's not a Top 100 game for sure, but definitely is a decent player that has some great sounds, great artwork, a cool theme, and some fun gimmicks! "King Kong! The 8th Wonder of the World!"
1
There are 2 ratings (that include a comment) on this game. Currently showing results page 1 of 1.