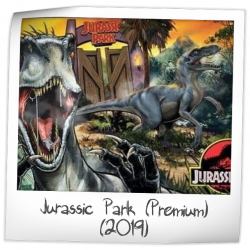 This game ranks 1st in the game group "Jurassic Park (Stern)". The group itself ranks #2 in the Pinside Pinball Top 100.

There are 154 ratings (that include a comment) on this game.
Currently showing results page 1 of 7.

Absolutely a masterpiece. So unique and intentionally designed. Perfect blend of playfield and code. Maybe the best game ever.

Love the game and those who say they don't, well they don't like difficult games :-) yes, it is though and frustrating at times but always keeps me coming back for more!

This game rocks with all the toys and ramps, that T-Rex and Raptor Pen are a blast. A must play or own pin, It's not leaving.

The game itself is mostly fun, popular, and attracts attention at locations. The ball swallowing T-Rex is a really good interactive feature. The theming is okay, but there is hardly any actual movie assets in the pin. One thing that I really dislike is the 180 degree lift scoops that lifts the ball up to the wire forms. Very clunky and inconsistent. Even the auto-launch can't consistently get the ball up that lift scoop ... and can mess up your skill shot attempt - very frustrating. Other than those, the game layout and features are great. The raptor pen is a good feature. The code is deep and there is a lot to accomplish and figure out (a good thing). Most of the graphics are good, but a few that look like a cardboard cutout puppet show don't match the others and are not that good. Good sound effects. If it wasn't for those lift scoops, I would probably own one.

It really is that good.

When I first played this machine, I wasn’t thrilled. Boy was I wrong! This one has really grown on me to the point where I love it and play it every time I see one. Elwin games are the smoothest games there are and something you’ve never seen before. The T-Rex head in this game is the best toy I’ve ever seen in pinball. There’s a reason this machine is so high up. The premium far out performs the pro and is an easy choice to splurge on or save some extra money for. I recently ended up buying this machine due to how much it has grown on me. This one is completely bolted down now and looks great next to my AIQ Prem and Deadpool Pro.

Bought this game, coming in Feb. Couldn't decide between JP premium and AIQ premium so got both. Both are amazing games

CZDMcG has this game on the wishlist.

Fun game to play for all abilities. Even the pro version is fun to play. The rules are easy to understand and all shots are achievable.

Dogballs has this game on the wishlist.

A pinhead's pinball machine. Deep ruleset, awesome theme, original layout and difficult to master. This is a long-term keeper for me. Alternate code is a must.

This is truly an all time great game. Everything came together on this one. It's hard enough to keep good players interested and coming back for more, yet it is not a game that turns off more novice players.

The ramp combos are the best ever and there is no end to the satisfaction of hitting them to get those skill shots and super skills shots! The flow from ramp to ramp is pure genius.

One of the best sterns to come out in years! Super fun with a great lay out and code.

JP is a great shooting game and I would argue one of Stern's best offerings in the last 5 years. Keith Elwin injected some much needed variety in a lot of the same-same offerings that Stern has put out during this time. The Jeep mech is new and clever, but not overly complicated, and the layout is varied, flowy, and fast. The theming is fine, even without the movie assets, and does an adequate job of putting you into the JP world without replaying scenes from the movie.

The voice acting is sufficient, using the same duo that was in Iron Maiden.

Differences between the PRO and PREM are enough for me to justify paying up for the PREM. The T-Rex moving head is great with the shaker motor, and the Raptor Pen turns into an actual pen, vs a loop-around shot. It changes the dynamics of that shot enough imo. The helicopter "spinner" is a throwaway.

Rules-wise, they are easy enough to understand and offer plenty for the novice to the pro. Lots of rules to play out, without being too overly complicated. Though it can be a fast and punishing game, I don't ever think it's unfair. It is rewarding for someone that is really in tuned with the shots.
9.760/10
63 days ago
???

Jurassic Park Premium has great shots, awesome toys, and deep code. Factor that in with a killer theme and you have one special machine. The game can be difficult but overall this is the best package in pinball at the moment.

A couple of really tough shots. Too bad it doesn’t have any movie or sound clips. That would have made it a lot better. Feels kind of repetitive going through all the paddocks. This game may be suited for better players. As an average joe I would pick other games to play.

Trex mech is great. Art could be better. I wish it had more of a pg 13 feel to it. I mean we are talking about dinosaurs eating people but no violence to be found in this game

Love this game so much that I had to buy it for my collection and it's bolted to the ground. Great, great game. One of my top 5 games.

what a pleasure. I expected a hard, complicated, incomprehensible flip for a beginner like me. With shots that only a select few were capable of making.
A flip where you had to play 3 hours on it to hope to do something. Despite the theme that I adored and my children too (3 and a half and 2 and a half years old) I had passed my turn.
Well, I was surprised, not punitive at all, at the same time I was used
to the turtle (before the save post mod of
Yoyokopter Mod), Understandable for a beginner, without going into the subtleties.
I find the ramps very satisfying to do.
Some shots are still hard, the hurries are still too fast for me yet. But I don't know the flip well enough.
In short all that to say that if like me you will shun the JP as a beginner, thinking that it was only for the tryharder. Well worth a try because he is really nice

I already rated the pro version, played previously. Now, I have Premium since few weeks.
The gameplay is almost the same. It's a deep rules. The X2 in the raptor multiballs is a plus.
The cabinet artwork is very nice to this version. The best of the three for me.
The noise of the helicopter is fun(style "apocalypse now!). I play with headphone.
But the most impressive is the T-Rex. It's a real interaction with the player. It's fantastic!!! It caches the ball, roars, shakes his head and place the ball in the ramp.
I'm not a fan of the shaker. But on JP, this is essential.
A great game!

I played the pro and loved it... after reading all the comments saying how much better the premium played with the mobile T-rex and raptor pit I am very happy to have spent the extra loot on the premium. (That said, dont be afraid of the pro if the budget does not allow an upgrade...its awesome as well.)

The game is a challenge but shoots very fair. It will take quite some time for anyone in our house to progress to Escape Nublar... but the “just one more game” factor is huge on this one.

I played this pin a lot on location but it took a while for me to understand, after reading the rules a few times it really started to grab my attention. A+ theme, shots and rules. I don't know how Keith did it, 4 ramps and it doesn't seem crowded! T-Rex is one of the greatest toys in pinball.

Hipponotic has this game on the wishlist.

Finally got enough time in on this one to add a rating - had the Premium for a couple months now, this is a game that probably won't leave the collection. Plenty of shots on the playfield - across varying difficulty levels - keeps things interesting and encourages new strategies for scoring. The modes generate a lot of excitement - especially any of the T-Rex modes as well as the Raptor Pen multi-ball. It's nice that there is one easy multi-ball that can be achieved from the start of a game, and a couple more that require a bit more work to achieve - but we've managed to get T-Rex, Raptor, and Chaos multi-ball modes in a single game a number of times which is a lot of fun. The ramp shots are satisfying, especially the right ramp, smart-missile shot is challenging and very rewarding to hit - upper flipper shots are somewhat difficult at times, but also satisfying. The control center modes are harder to kick off than I'd like, because it can be a pretty difficult shot - but those modes are also a lot of fun and can be completed even as an average player. Overall, a fantastic game from a gameplay perspective. The artwork on the premium - cabinet is 10/10, backbox art is divisive - I think it's 'fine' - some of my neighbors/friends think something is 'off' about it - but it's easy enough to replace and there are plenty of options. The playfield art is 'fine' - it's colorful and fits the theme, but it's basic at the same time. The Stern default A/V package is pretty good - if you don't mind generic voice actors, animations, and music - you get some of the main Jurassic Park score which I think is about the only thing that brings anything authentic to the 'theme' - and even though the animations are custom - they are good (not BKSOR or Deadpool good, but much better than some other Stern games). The main con for me on this one is some of the issues - seems like I am constantly adjusting the upper flipper alignment, T-Rex alignment values, and power settings to get the game to play the way it should - but when it's dialed in, it plays great. Ultimately, a great game for casual players, average players, and pros with plenty of replay value, one of the few pins I've picked up NIB that I felt was completely worth the price of admission.

Simply incredible Pin.
deep code
lastability
Smartmissile is one of the best gimmicks, including a satisfying longshot, i have seen in pinball
the two ball multiball is the best 2ball multiball of all times
For me it is the number one machine of all times