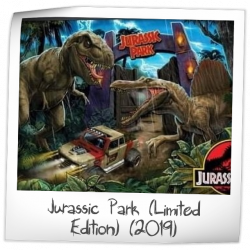 This game ranks 2nd in the game group "Jurassic Park (Stern)". The group itself ranks #3 in the Pinside Pinball Top 100.

There are 70 ratings (that include a comment) on this game.
Currently showing results page 2 of 3.

Great game, but the pro maybe a better value

Enough Said. Now play it and enjoy. Thank you Keith!

Love the game, great rules. However after having it for a few months it gets repetitive. Not quite sure what it is but the lastability is not there with this one

Really fun game. Already put 50 plays on it and I am officially addicted. The T-Rex is an amazing toy but it only seems to swallow the ball 75% of the time. Hopefully I can tweak it and get it to work more consistently but other than that this game is incredible.
This is easily the best Stern game made in the last few years.

Lots of shots to think about and how they stack/combo. Early code and its just going to get better and better!

I have had a chance to play this game quite a bit at a local barcade over several visits. I probably have over 50 games in now. The layout of this game is just phenomenal. With no rule consideration, I could shoot this pin all day. The combos and smoothness of the shots, as well as the satisfaction hitting some of the more difficult shots is just amazing. Even the smart missile, which I have still never hit, still gives me a great moment and opportunity. I know when I hit it, I'm going to go nuts, and that's what I love about it.

The T-Rex mech was fun. It was great to see. It occasionally rejected when trying to feed it, but that was mostly because the shots werent solid. Every solid shot went in no problem. The Raptor Pin was probably my favorite toy. I love the captive ball creation, and it really made the game feel fast and threatening.

The major downside to me is the difficulty in understanding the rules when you step up. While that's always the case with pinball, I feel like that rules are fairly unintuitive, and given that you can stack so much stuff in the game, there is so much blinking at one time I had a hard time grasping anything my first outing. After coming home and researching the rules, the next time I played I felt like I understood what was happening, and I really enjoyed the game a lot more. I feel like the game is still accessible for a casual or non-pin player, but even an intermediate player will struggle to grasp the game without research. I didn't take this into consideration of my score as there isn't really a category for (User experience/Ruleset understanding). Game rules gets close. The game IS clear about what it wants, but the stacking just makes it complex. That's the only reason I gave 5/6

Same complaint as everyone else with the VO. I don't think it's THAT BAD, but it was really disappointing to miss out on the movie VO. That said, being in the game industry and working with IP, I completely understand, so I probably give this a bit more of a pass than some. I think they did a good job overall with the IP given what they had to work with cost wise.

I'm not one to get overly excited just because something is new. I tend to like fast, flowy games with combos. This hit that mark to the extreme. While I admit I like the JP license, it's not my dream theme, and gameplay is always #1 for me. Even so, I think this game is fantastic. For a long time I thought I'd be bringing home a different pin next year, but Jurassic Park has me locked in. If it does get here, I'll be sure to update.

I was on the fence on this one. Played it on route and tried to blow it up, but could never get even chaos Multiball going. Very tight shots. Well I took a shot and purchased the LE and I am not disappointed. Awesome combos, flow, and overall feel of quality. It’s exciting and fun to play. Plus the difficulty makes me better on other games. Stern quality and reliability is top notch. Thank you Keith and Stern!

Great looking game, playfield art could've been better. Lastability will be shorter then my other pins, which I never really sell newer pins. Would've been a perfect game with 1 less shot it in, specifically the right playfield. The flow is right up there with any game, but right ramp and orbit are not as consistent as they should be. Needs work on music and call outs for sure.

Another solid entry from Stern with this pin. The toys, gimmicks and features along with the playfield design are well designed, making for a solid addition to Stern’s 2019 library of titles. It is fun to play and I love the T-rex head following the ball around on the playfield wanting to eat it until you have to feed him. It almost feels like it is a pet by the time you do feed him. I left from playing the game calling him Dino. Even though I enjoyed playing this pin, I have not felt compelled to replay it (or the pro version) again. So I won’t rate it any higher than it should be rated. I also don’t fully understand the theming guessing that the licensing for Jurassic World must have been prohibitive prompting Stern to option Jurassic Park to save a few bucks. Stern is getting VERY good at programming their games with an added sense of humor and mirth, resulting in a much more engaging play experience, particularly for casual players. They are doing a great job at staying a step ahead of their burgeoning competition this way and us players are the ones who benefit.

Game feels clunky and not enjoyable over the several times i have played it. I felt that it had no depth theme was cool the t-rex toy gets old fast. Another not ready for release Stern pin.

I enjoy the game, it’s a unique layout and great theme integration. It needs its code improved upon, but I believe that will happen. This one will stay in my collection, but then again, most end up staying in my collection.

I loved Iron Maiden, but this is even better. Everything is very well integrated to the game play. The new code made it a little bit better, animations can be stopped, if you are in a hurry :-)

got about 40 or so games on this so far . great layout with well varied shots. a lot going on still don't know always what to do. I think more time with it will bring it all together for me. ball times sometimes feel little long. best skill shots I ever seen. code will keep growing to make this an all time great. art on table could be better. callouts need an overhaul. all in all great

This, to me, is the first game in a long time, where I feel part of the story. Everything is well thought out. The raptor pit and t-rex are great toys. It’s an amazing pin!

After owning for awhile, I feel I can say that the game is amazing at how the rules and MBs are thought out. The variation between objectives is quite creative and makes this game one of the best in a long long time.

Wow, believe the hype! This is the real deal! It really has it all and the best Stern release since Iron Maiden and this is simply a much better theme and very family friendly. A classic and timeless theme where they got almost everything right. The callouts are the only (small) complaint. Other than that is darn near perfect. And congrats to Stern for correcting their playfield situation that could have bamboozled the whole thing!

If you don't own one you're definitely missing out!

teekee has owned this game in the past.

fun game , a keeper in any collection...

The best pin I own right now. Keith Elwin is the GOAT.
All the trimmings are well warranted and the invisible glass is crystal clear.
10/10 Stern.

One of the better Stern games lately, though wish it had more of the cast callouts as it's pretty bare bones and Nedry gets old quick. As far as the game goes it plays great. Neat layout. After playing a while I got tired of being interrupted by a pause in gameplay with the same mode cuts every game, but found you can speed that up and skip by hitting both flippers. Solid game

I want to like this game but so many shots take try after try to hit it, like I’m chopping down a tree. Whack whack whack

Great game, lots of fun and lots of fun, kinnetically satisfying shots to make! I love the ball eating dunasour head, what a great toy adition!

Amazing accomplishment from Stern, sure to do very well.
Love the variety of things to shoot for and the satisfaction of making some of the more difficult (but makeable) shots.

Chambahz has owned this game in the past.

PreviousNext123
There are 70 ratings (that include a comment) on this game. Currently showing results page 2 of 3.