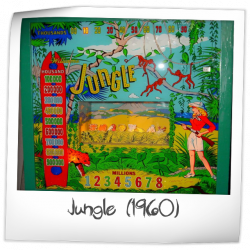 Played this last year in The PPE Alameda.
Whilst, I liked it thought the game play was a bit flat. Hard to get ball back to the top.
Artwork good but not great. They had a Genco Fun Fair which has a similar theme and is a far better game. Not bad but not brilliant. Weird cabinet. Oh and it's a safari theme, which may offend some but not the likes of me as it was a pretty natural thing to feature safari stuff until the World went soft and squishy and bordering pathetic.
8.789/10
8 years ago
ARF

A very interesting game with it's unique mod cabinet, great Molentin art package and fun shooting gallery type animation. The gameplay is not perfect but good. It has an interesting layout and is very challenging to achieve the special. Heavy importance on your plunger skill shots. The layout makes it very hard to get the ball back up through the top lanes but very satisfying when you can. My only criticism to the gameplay is somewhat consistent and ending scores rarely have a large variance. With that said this game just oozes charm. It's just fun to look at and the animation always makes me smile.

AlexF edited previous rating on February 01, 2021.
AlexF has owned this game in the past.

Love the BG animation, flip down animal heads, when you achieve certain rollovers or gobble holes or hit the center target that spots the animal currently featured on the reel.
Nice cool retro BG&PF artwork package with cool cabinet styling, though paint scheme on Cab is boring.

I never thought I would be able to find and play this game. I got lucky and found a collector who had this (and a bunch of great games other than this one) in his basement that he graciously let me into and give it a go.

The Good:
This game plays incredibly well for being so old that it does not even have scoring wheels. The center target with the animals rolling on by is completely about risk/reward as it is surrounded on either side by gobble holes. The artwork is tight and the dropping of the animals on Safari plays incredibly well. Just like game with lots of drops, before too long, that last animal is a tough shot to clear. Lots of action up top, lots of skill down below on this pf. Breastalicious Babes with Buffallo Bazookas make me HOT!

The Bad:
I may never get another chance to play this game again, much less ever own one. The first time I saw it was on Clay's repair vids/dvd's and it took me way too many years to find one to play.

The Takeaway:
Possibly the only game I'd ever want to own that has a gobble hole. The cabinet is way rad and gives you a place to set your cigs and beer down while you get your pin-game on. The theme is definitely not for the vegetinarian PC crowd... but so what? Who cares about those stick in the muds! Even thought this game was made in 1960 (Eisenhower was still in office) pinball may never have looked better. So get in touch with your inner Nugent and if you can... enjoy this damn fine game that plays like every great white hunter on safari wishes he could!

Update:
Wouldn't you know... dreams do come true. A friend bought a copy that I had played locally and ended up trading it to me for work done on his own collection. I didn't even ask for the game (not that I am ungrateful in the least...) and it came to me in a roundabout way.

Now that I have had some more quality time with my new baby I can give an even more in depth review of this game.

First off, scoring is not always easy to recognize. The lit scoring means that you have to pay attention to the game in a different way than you would playing an EM with score reels. If you have a million point score without a 100-900k light lit, it is just a million point score. It took me 5 minutes to figure that one out. Also, If a pop bumper is not lit for points... like many other features on the table, they DO NOT add to your score when hit. You just cycle between the 00-90 match sequence for an audio\visual feedback with the game. You have to hit lit pops and lit/unlit lanes and gobble holes to advance your score by 100-500k increments. This means that much of your action on the playfield DOES NOT benefit your score. Even the center standup target. It may knock off an animal for you, but it will not add to your 100k/millions score. This is very confusing for many players and it made me look at this game again in a different light. Now this game is all about playing the shots to the side and nudging the action up top. The difficult to access top lanes on the left and the right not only score good points but also light up the 100,000 point pop bumpers. With a properly set up game that is fast, this can be where your big points are. However, getting into those top lanes is more luck than skill as it is very difficult to bounce out of those lanes. Quite often the ball will enter from below from one of the jet pop bumpers instead of dropping in from the top. Even then, put action in the pops is where this game is at. The funny thing is though, the advance and the jet bumpers don't actually score points. They just go ding ding ding and maybe advance an animal. So wouldn't you know that the action in the pops is to try and drive the ball towards a better scoring feature in the top lanes. It's the only safe place in the game. The lower playfield even with the small gap between the flippers is very hungry on the sides and the gobble holes live up to their names.

Modern tournament players are going to hate this table as it requires a great deal of nudging and the scoring opportunities are not obvious. However, the game plays great when set up as it should be and when she'll understand what's going on it's a lot of fun to play.

All in all, this is a great game. It is also my first woodrail and my first Harry Mabs game. Step on up, Put down your cigarettes and your beer right in front of you and make sure you don't shake the game too hard. You'll knock your beer over and put out your smoke.