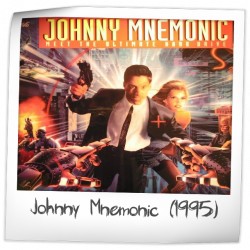 There are 159 ratings (that include a comment) on this game.
Currently showing results page 1 of 7.

Johnny Mnemonic is a great fast game with awesome rules, music, and game play. It is important that you play this game working 100%. You could say that about all games but this game really needs to be working well to really enjoy it. If the glove, flippers or anything else aren't set up right it makes a big difference. This is my second JM. The first was a players pin and it plays completely different then my new collector quality JM. The ramps are lightning fast and the rules and music are well integrated into the game. I don't care the movie didn't do well. This pin is great. Play one that is dialed in and I think you will agree.

The pin plays well and is fun - don’t let the bad movie theme throw you off!

All my reviews are going to follow a simple formula for those reading.
Number of shots to make - Pro's - Con's - Must Have Mods - What To Look For When Buying

Number of shots - 7 - Above Average

Pro's:
* Game is fast, especially orbit shots
* Power Down wizard mode one of the best in pinball
* The changing spots of the matrix and having to think about which spot to place your physical lock is very clever
* Nice use of diverters
* Targets to light ball save makes them relevant and useful

Cons:
* Missed shots to the ramps brutal
* Difficult video mode
* Voices are not original actors
* Glove is a bit slow moving, George Gomez has stated he would have liked it sped up

Must Have Mods: (Note I will not include things like LED's, Color DMD, Invisiglass or Speaker Upgrades unless it's really badly needed)
* Dolphin mod
* Protector for matrix exit

One of the worst Pin movie combo ever made. It’s like Bill & Ted has to wear suits and run around with guns trying to find the lost box of Lucky Charms. 3 thumbs down, mine and yours together

One of my favorite games ever. Gomez rules.

Johncare07 has owned this game in the past.

This game has a very quick, flowing layout. Gameplay slows down when the hand magnet grabs your ball and when you are in video mode - i'm not a fan of video modes and this one is no exception. Overall this is a decent game. grab one if its at a fair price!

I really like playing JM, when I can find it. Hummmmm. As per other games with low production runs, my final rating is still to be seen. I am looking to buy JM as soon as I can. JM might rate a keeper. I like Keenu Reeves and his movies. The JM movie was an interesting Sci-fi movie. UPDATE. 3-29-19 "I GOT ONE" JM IS WAY MORE FUN THEN I EXPECTED. FAST AND FUN. I am a George Gomez fan!! Great shots. Could be one of my "FOREVER" pins.

Super fast loops, hand ball lock and matrix, decent modes, midnight madness, and perhaps one of the best wizard modes in pinball with power down. Heck of a sleeper and under rated game. Glad I own one and will be fun exploring this game.

I love this game, its a blast to play, and always one that I keep coming back to time and time again. The power glove does slow things down a tad, but its a nice change of pace from crazy fast game play that this game is known for.

SevenEightyRacer has owned this game in the past.

Fast, faster, fastest. This is the machine if you want to improve your reaction time. Very good rules, different and not to easy shots, hand and mini pf is a cool feature, video mode. In my eyes one of the best WPCs.

The fastest pin I’ve ever played. Shots are great, depth is good, having never made Powerdown. Really enjoyable pin.

I don’t care for the theme but not fussed either way.

Flynnyfalcon edited previous rating on April 25, 2019.
Flynnyfalcon has owned this game in the past.

Underrated, fast game, not The Shadow but tuff and fun, glove is cool. I like the challenging pins.
8.800/10
1 year ago
RVP

I got this pin in Full Led and with a color DMD, which makes it a lot better! The game is just tons of fun. You can play for your modes, Multiball or for the spinner (+bonus). I can imagine that something must be done about the spinner if you want to use this pin for tournaments but for the homeplayer this game will give you a lot of fun!

If you like fast gameplay and soundtrack then this is it. Movie was a flop but pinball came out just fine.
Those were the days where they actually made an effort with playfield toys (movable CyberGlove).
A lot of fun for the price.

ViperVS edited previous rating on July 05, 2019.
ViperVS has owned this game in the past.

Super fast game when set up properly and well maintained. Hand is cool, but slows the game down, and can be finicky to maintain. Theme and art is bad. However, good value in my opinion if you can find a nice one under $3k. Wizard mode is great!

Parzival has owned this game in the past.

Like the majority of 90s Williams games, this game is outstanding. Super smooth shots and ramps with two diverters up top moving the ball around, some simple mode-based gameplay, and a ridiculous toy that feels almost too grandiose for a machine about a goofy, semi-forgotten sci-fi movie. The theming is great if you like sci-fi. If you think Tron: Legacy is cool despite the move it's based on, there's no reason you won't love this too. I like the look of all the triangle inserts on the playfield, although the art isn't top tier or anything. If I have a main quibble, the game plays fast and the glove slows it down. This isn't a great game for a stupid movie though, it's a great game period.
7.887/10
1 year ago
BTB

Solid pin and a good starter if you are getting into buying your own. It is enjoyable but not very deep which is typical of most games in this era. Worth a try and fun.
9.256/10
1 year ago
???

Was 1995 the best year for pinball ever? Quite possibly, and in turn that may be the major reason Mnemonic isn't better remembered -- any year with Theater of Magic, Attack from Mars, No Fear, and Congo (not even to mention oddballs like Apollo 13, Who Dunnit, or Waterworld) is going to have some also-rans that may be hidden jewels.

The movie had a plot that was so non-sensical at the time it ended up being inadvertently campy good fun. Having Keanu Reevers on your backglass is the perfect starting point for the level of seriousness. The passage of time only accentuates this (your average USB stick now has as much memory as Mnemonic's brain!). THE PROBLEM IS UP HERE! (Points to brain.)

But, Mnemonic the machine managed to recapitulate the plot of the movie and some of the cool tech gimmicky things quite well, incorporating a good flow, progressive goals, and the toy (the vaunted glove, which is basically a tic tac toe machine!) that actually is a completely non-pinball skill but is still fun (compare to: the helicopter in Rescue 911, or maybe the crane in Last Action Hero).

As such, it has aged incredibly well. I enjoyed this a ton when it was on location and among the pantheon of mid-90's Williams/Bally DMD games, it deserves quite a bit more respect. It's not the complex beauty of an Addams Family or Twilight Zone, or the perfection of a Theater of Magic or Attack from Mars or the chaos of Shadow, but it was a pretty good design and the machine still plays well.

This one also has a special place in my heart as being the only William Gibson-themed machine; I am still waiting for a Sprawl Trilogy pinball machine (Neuromancer, Count Zero, Mona Lisa Overdrive).

One personal PS: I played on this machine in a singles league at the time it was on location. First place in the league was a nice cash prize and a trophy; second place was smaller trophy and a little less cash; third place was a Mnemonic translite. I finished in...third place. I still have my translite, which is now worth more than the value of both trophies plus the cash plus inflation. WINNING
7.696/10
2 years ago
SUS

Fast pin with good satisfying shots. The rules are decent and the glove is a cool and unique toy.

Grayont edited previous rating on January 06, 2018.
Grayont has this game on the wishlist.

Johnny mnemonic is cool game the gloves grabbing the balls are awesome. It has good sounds and callouts and good rules.

Very intense, fast and fun game. When you get this game flowing it delivers an adrenaline rush. Excellent flow with great combo shots between the ramps, orbits and the spinner orbit. This is the fastest flowing machine I have ever played. On repeating orbit you can get it so fast you literally have to time shots without even seeing the ball. The hand and cybermatrix is a cool toy that creates a memory aspect to the game; remember where the extra ball and other rewards are so you can get them with when locking a ball. There are number of different modes and multiballs and the final PowerDown Mode is a great Wizard mode; Sectors in the machine are shutting down and you try to keep powering them up by shooting at them. Not the best looking artwork on the cabinet or translite but the play field is nice. Overall a lot of fun to play.

DrDQ edited previous rating on November 18, 2018.
DrDQ has owned this game in the past.

I had a lot of fun on this pinball machine. The "hand" is a very nice idea, it adds almost a new game and also recalls those of fairgrounds.
7.832/10
2 years ago
MAY

Holy underrated pin Batman! I lucked out and own a very nice example of this pin. Glove working great. Cabinet in fantastic shape with little to no fade.
Game plays fast and fun!
I presume this game gets overlooked due to theme and a glove that usually doesn't work. However, play a solid JM and you'll be pleasantly surprised. It'll be interesting to see how long she lasts in my collection, as I turn over the collection quite a bit. But, as it sits right now, I am very much enjoying this pin.

CyberNinja24 has owned this game in the past.