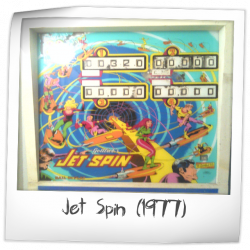 I enjoy this pin more than most EM's. Great art and and a playfield layout that is more than OK.
9.465/10
1 year ago
RFK

This is the pin I grew up with. An uncle of mine had it in his home since 1979. It was routed for a couple years and then he was given it as a wedding gift by my aunt. I was at their house from 1981-99 no less than once a week. We played it for HOURS. It has, in my mind, the best back glass of the era. The artwork on it and Super Spin is fantastic. The colors and lighting make is just pretty enough to have in the living room with the machine lit up and the room dark. The gameplay has enough challenging shots to make, from the Roto-spinner, to the deep bullseye in the top left. Hard shots, fun shots, lots to do on the playfield, only thing it is missing, is Gottlieb’s ever famous drop targets. I once read an article that it was slated to be the first Gottlieb with all of their major target types. 4 drop targets were prototyped into the playfield parallel with the upper left bullseye, but were pulled to make production easier. I am often surprised how low it is rated, but hey, it has a soft spot in my heart. Heck, we even still have it 40 years later.
6.430/10
1 year ago
DO

Game is nice, but too easy to beat with above average ball control skills... gets a bit boring for me after a while.

Dono has owned this game in the past.

WOW !! This is a fast and fun to play EM !! Can be very challenging but when you get on a roll you can rack up the points. The Roto-target is fantastic ... the Vari-target is fun and makes you feel good when get it with a hard, direct hit. I love the artwork ! The art on back glass, playfield and cabinet all work together nice. Sounds are good > old school chimes (classic pinball). Only complaints are On the Back glass >WHY the guy (to the right of the red head woman) doesn't light up .... and when you hit one pop bumper > they both fire (reducing the excitement when the ball is bouncing between the pops). Also wish the bonus points didn't max out at 15,000 (for each ball). but AWESOME pinball machine !!! LOVE IT !!
7.711/10
2 years ago
???

very fun em game.. I really like the mechanical target on the right side of playfield... when you nail it and it ratchets back far its very satisfying!
7.273/10
2 years ago
DAD

This is a fun game I grew up with. Spinning the wheel and hoping for one of the three roto targets come up as the star. If not, get rolling the roto wheel again.

Love the great artwork and theme. A lighthearted game for all ages and the artwork exemplifies this. Very approachable machine that is just fun.
7.324/10
2 years ago
TDX

The Roto-target at the top is what makes this game and the fact that you can hit 3 different targets instead of the normal one target on most earlier roto-targets games from GTB. Also nice is that it has two on playfield specials, (one very tough shot bullseye, on left side) set up by a hard shot to the vari-target and one from the roto-target if you are lucky enough to get the center target to land on a star first. Extra ball when lit targets are "random" and you have to be ready to shot for them quick as they do not stay lit long. Cool theme and artwork by Gordon Morison.

So, for Years you think that a game is not very good and recall playing it some where in your youth. Then one turns up for sale in ok condition, but in need of care and attention. You end up buying it doing it up and then you can't stop playing it. Crazy really, but that's pinball. Tastes change and your outlook on certain games completely changes. Fact is I still don't really like the game, but can't stop playing it. The one main thing that detracts from this game is it's sheer size. The back flash is so oversized it dwarfs other games next to it. Ugly, yet fun. I had a few girlfriends like that.

It seems like they threw a little of everything but drops on this machine, but I'm not sure it really benefits from it. It is a fun table for all the different shots but it seems more like a mosaic of Gottlieb machines than a flowing cohesive design. I do think the art is really striking and it's a great looking machine.
7.393/10
8 years ago
RLR

A pretty fun game with strategy tied to the roto-target. Do you go for the 500 or star or do you try to spin the target to a better value? Vari-target is OK but not one of my favorite playfield mechanics.